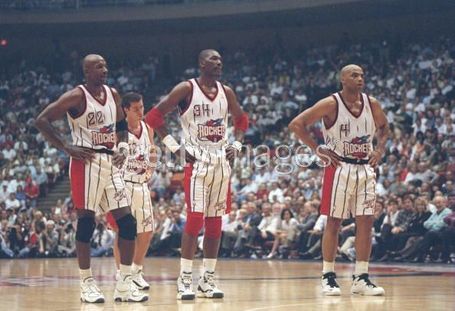 Oklahoma City's Sam Presti may be the new golden boy for fans of NBA General Managers, especially after the hubris and mediocre offseason Kevin Pritchard and the Blazers had (can't wait for the Blazers Edgers to drop by tonight). Both Presti and Pritchard, like Minnesota's David Kahn, undertook rebuilding efforts from the ground up. Houston's Daryl Morey, on the other hand, took over a team that had two high-paid, injury-prone stars in Yao Ming and Tracy McGrady. Including the playoffs and this season, Yao and McGrady have only played in 73% and 55% of the games under Morey. Neither have played yet this year and Yao is expected to be out all season (McGrady won't be playing tonight, but may return soon). All the while the star duo took up 48%, 50% and 54% of the Rockets cap.

But despite having his hands tied tighter than any other GM in the league, Daryl Morey went out and built teams that posted winning percentages of .671 and .646, made the West playoffs both years and, without 1 minute from either star, took the Lakers to Game 7 of the Semis last year. And so far this year, again without 1 minute from either star, the Rockets are 6-5 with wins against Portland, Utah and the Lakers. They also lost to Portland, the Lakers and Sacramento, but pobody's nerfect.

Make no mistake, these were Morey's teams: he served as Assistant GM from the Spring of '06 until he was hired as GM the next year. He had a huge influence on the acquisitions of Chuck Hayes and Shane Battier, then Aaron Brooks, Carl Landry and Luis Scola the next summer, and Trevor Ariza, David Andersen, Kyle Lowry and Chase Budinger this past season and offseason. That's your 9-man Rockets rotation, with not an All-Star among them and only three 1st round picks (Battier #6, Lowry #24, and Brooks #26).

Daryl Morey is the General Manager King of Bootstraps. David Kahn has been under some serious fire lately, but if there's any consolation for Wolves fans in the Morey story it's that even the biggest of set-backs don't ruin team-building. Strong player evaluation, especially in the draft, and smart financial moves can be stabilizers against chinks in the armor.

For an opposing viewpoint see The Dream Shake