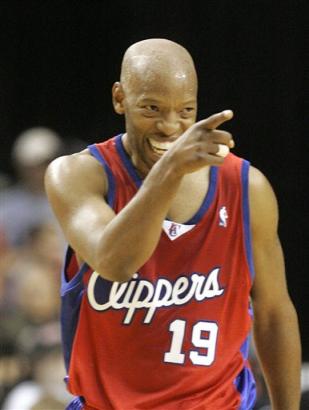 Tonight the Wolves face off against two former teammates (well, for 1/3 of the current Wolves at least). Despite their new squad's paper talent (Baron Davis, Eric Gordon, Chris Kaman, Marcus Camby and an injured Blake Griffin really ain't that bad) the Clippers are still 0-fer this year. But that always seems to be the Clips' scene: optimism in the offseason, disappointment in the regular season.

Back to Smith and Telfair, though. I'd like to take this opportunity to lobby for calm if Telfair and Smith, and even Mike Miller and Randy Foye for that matter, have very good years. So far all we've got in return for the 4 players (plus Mark Madsen, Bobby Brown and two 2nd round picks) has been the rights to Ricky Rubio, Damien Wilkins, Oleksiy Pecherov, one 2nd round pick and financial relief.

But despite what Bill Simmons may have you think, the Wolves' roster of years past wasn't going to bring a championship to Minnesota, especially if Kevin McHale, Glen Taylor or whomever was at the reins decided to re-up Miller and Foye to expensive extensions.

Telfair, Smith, Miller and Foye have all looked good so far for their new teams, but I promise you we're better off without them in the long run.

As for the guys who are with us now, tonight will be the next installment in the Jonny Flynn vs. Ramon Sessions saga (the next Hoopus Death Match?) and the next step in Al Jefferson's bid to recover from injury and blend his strengths with what Kurt Rambis is trying to teach the team.