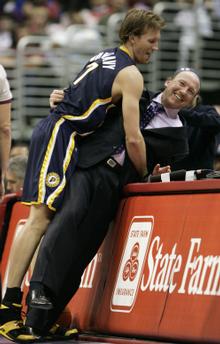 Last time they faced the Clips, the Wolves were oh so close to a win. But Chris Kaman manhandled Minnesota down low and Rasual Butler, Eric Gordon and Baron Davis all scored in double figures. Corey Brewer and Ryan Gomes each shot 29%, taking 21 and 14 shots respectively. It's just not a good recipe.

Tonight the Wolves won't have to contend with Gordon (out with a strained groin), but they'll be facing a Clippers team coming off of a big win in Denver. The key to getting off the 12-game losing streak will be what it has been for all 12 losses: teamwork. Limit turnovers (they beat LA 12-18 last time), move the ball to find open shots and force the feast or famine Clippers to take jump shots (Davis and Butler shoot less than 40%) all night by denying entry passes and collapsing on penetration (Kaman and DeAndre Jordan play well against the Wolves, unlike.... wait, like everyone else). I know, easier said (like, oh say, 13 times before) than done.

Can you tell it's getting tougher and tougher to imagine scenarios where the Wolves pull out a win?

See our brethren at Clips Nation for the other side.