Dealing with no hope

Share All sharing options for: Dealing with no hope 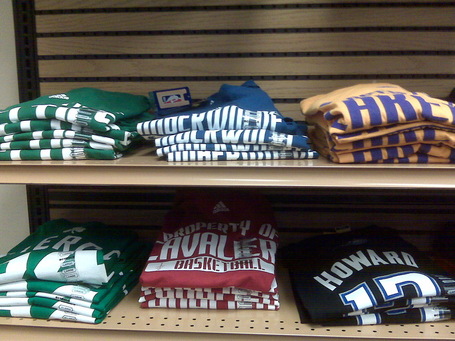 Take a good look at that picture.  That's the view from the "Wolves Section" of the Scheel's store in Mankato.  4 shirts (one of them to be picked up by yours truly) surrounded by 5 Celtics shirts, 5 Lakers shirts, 5 Cavs shirts, and some Dwight Howard and Paul Pierce gear.  I was out and about at 9 AM for some Black Friday craziness and I'm pretty sure I didn't miss out on the Wolves rush.  What I did miss out on was the North Star rush.  Check out the Stars' apparel rack: 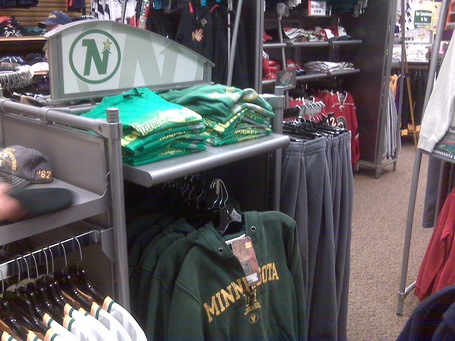 If you look to the upper right portion of the picture you'll see that the old-school Stars logo shirts were picked through to the bone; with only smalls and XXLs still available at the same time the Wolves had XLs and Ls still available to anyone with some cash in their wallet.  For those of you playing along at home, that's a fully stocked apparel stash for a team that doesn't exist compared to 4 shirts for a team that was supposed to play on ESPN tonight.

I say "tonight" because I'm writing the game wrap with 2 minutes to go in the 3rd quarter and the Wolves are flirting with a 30 point loss to the Suns on a game that was preempted for the OKC/Milwaukee tilt on national TV.

For those of you who missed out on the nationally televised game because FSN and Channel 45 didn't pick up the slack, you didn't miss anything.  In fact, you may be better off not seeing what happened at the Target Center on Kurt Rambis Glasses Night.  The only intrigue available to the home fans was wondering if and when Kevin Love would take off his Rambis glasses while sitting behind the Wolves' bench.  Really, that's the only interesting thing about this game.

The only other interesting thing about the game was that the Suns announcing crew took shot after shot at the Wolves' front office for putting together a team that clearly can't compete at an NBA level right now.  From quickies about Ricky Rubio to extended stories about how the Wolves were consistently out of position, perhaps it was a good thing that the Wolves weren't granted a national audience tonight.  If they did have a spot on ESPN they may go from 4 shirts at Scheel's to 1 or 2.

Some highlights from the game: Robyn Lopez torching Al Jefferson in his first minutes of the season, Earl Clark showing all sorts of versatility, Goran Dragic getting a rebound/put-back against 2 Wolves front court players, Jonny Flynn being completely unable to run a professional offense, several mentions of the fact that the Wolves traded away 2 starters for a guy who may never play at the Target Center, and Corey Brewer missing all sorts of layups and close shots.

We all knew this would be a bad year.  We all knew there would be a pause before the flurry of using the team's considerable offseason assets.  That being said, who knew it would be this bad?  How can this squad, and its fans, continue at this pace?  The Wolves are not even close to winning a game right now.  How on earth can they use said considerable assets to put together a competitive team before they lose the increasingly obviously frustrated Al Jefferson?  Love coming back will help but will it help enough to bridge the gap between the hopelessness Wolves fans currently feel right here and the now and the time where they may be competitive some time in the next...what, 2 or 3 years? This team is off of the Minny sports radar.  Here in Mankato I have MSU hockey on the radio and Dr. Laura will take over when that game is finished.  No one is going to the bar to watch this mess.  No one is going to Scheel's to buy a shirt or a jersey (except for this guy right here).  Where is this headed?  What is the end game?  This is unwatchable basketball.  Wolves fans deserve more than this.  Even the diehards.  We deserve more than this.  This is nonsense.

To be perfectly honest, I don't look forward to watching these games any more.  I really don't look forward to writing about them.  What am I supposed to write about?  We all know the score right now: A complete lack of talent and a bunch of guys who don't appear to fit together.  Sessions is a player.  Jefferson is a player.  Brewer is a player with 4 other players around him.  Flynn looks like a chicken with his head cut off.  Opposing announcers talking at length about how Ricky Rubio will never play here....what the hell?! Were the folks at www.firedavidkahn.com ahead of their time?

I'm sticking through this but it is increasingly becoming a chore just to pay attention to what is going on.  I'm sure fellow diehards feel the same.  I know they do.  I get emails.

Whatever the case, the long and short of today's lesson is that I got to buy a single Wolves shirt on Black Friday and instead of finding a Wolves sweatshirt for my daughter I bought her a youth basketball for Christmas before we sat down and watched the Thunder vs. the Bucks.  Forget the Wolves.  I want her to be exposed to real basketball.  When will we see real basketball again?