We Interrupt This Program; A Review of Bill Simmons' The Book Of Basketball

Share All sharing options for: We Interrupt This Program; A Review of Bill Simmons' The Book Of Basketball 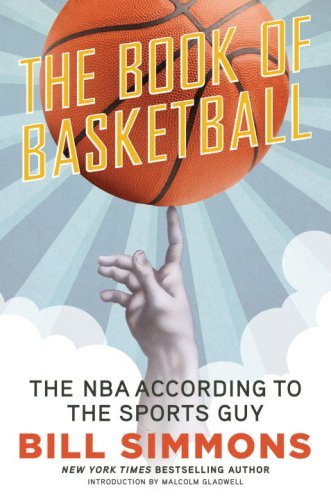 After finishing Mr. Simmons' 700+ page book on the history of basketball the music/book/movie snob in me was just itching to go after an easy target: An indulgent, self-absorbed, unedited blog post of a book that traffics in not-too-mild sexism and a few too many casual rape jokes.  At the end of the day these items (and others like them) are probably a bit too much to overlook in terms of granting Mr. Simmons' work a place alongside of a Bill James Baseball Abstract but, most importantly for Simmons, they also serve to inoculate the Book of Basketball from any serious attempt to grant it seriousness.  Simmons isn't Bill James with dick jokes (as Josh Levin writes about him in his review at Slate; which, btw, is wildly off the mark for both men) he's Rush Limbaugh with a hard-on for the 86 Celtics instead of the GOP.

As any long time Rush listener knows, the big fella has a tendency to let his mouth walk point into some pretty hairy situations.  Whenever he tracks a bit to far ahead of the pack, he falls back on the oldest trick in the dittohead book: Entertainment Deniability. Hey, it's all just for fun and satire! (Dan Barrerio is the biggest local practiotioner of this peculiar trait.) Whether he knows it or not, Bill Simmons is a master of the Rush Secret.  No matter what he writes, you have to remember that this is a printed version of talk radio; a 700 page rant into an open mic that is just as much about starting arguments as it is about making you not turn the dial, or, in this case, to turn the next page while you sit on the toilet.

Once you grasp the basic idea of The Book of Basketball being a written talk show, it is much easier to dispense with any lingering notion you may have about wanting to take Simmons to task for his inability to develop complex themes above and beyond casual pop culture references or short blurbs about his childhood.  Jabaal Abdul-Simmons (the name he gave himself during a youthful racial identity crisis) needs to be the starting line, not the destination.

And so goes the rest of the book.  Whenever given the opportunity to open up the nuances of basketball to the world at large in terms of themes and not readership, Simmons looks inward.  I suppose we could quibble about whehter or not he is needlessly selfish but that is besides the point; he is what he is and it's part of what makes it so entertaining and on a level between disposability and greater meaning.

To give you a small example of what Simmons could have done, and to give you a better idea of what I'm writing about, Simmons puts on a Chamberlain-esque display of stat watching and individual self interest throughout each and every single one of the book's 700 or so pages.  He is the key actor in explaining the world around him and, like the BIg Dipper, is unable to really figure out how to use his blatant self interest and involvement in a way that would turn his work into something more, a "no-stat All Star" a'la Shane Battier.  Basketball (and Simmons' writing itself) is a wonderful example of the constant interplay between self interest and a greater good.  How do you harness individual drive?  Can an absurd amount of selfishness be used in a positive group setting?  For a Larry BIrd fan who grew up with a racial identiy crisis in a working class family I was really pulling for Simmons to be less Chamberlain and more Battier.  Race and class can be layered in at every step of the way in a discussion about the NBA, and while Simmons does an admirable job of painting a general picture about the subject of race (he never really broaches class but his essays on Elgin Baylor and Oscar Robertson hit home even at the most superficial level), his brand of selfishness just doesn't seem to have the gusto to go for it all.  He has his eyes on the prize but I don't think it's the prize I was hoping he had his gaze set upon.

Ultimately, this is why Simmons should not be slighted; he's a basketball starter drug.  He may not swim around in the deep end of the pool but he does make you want to jump in.  To bring it back to the NBA, he's the type of guy who will never lead you to a championship by himself but damnit if he doesn't make you interested in wondering what he brings to the table and how he shapes up to other guys who do the same thing.  (In the spirit of a Simmons-esque side-note, my vote for Player Most Like Bill is none other than Al Jefferson.  Very good at one thing with a huge blind spot and an amazing ability to need everything to be about him at all times in order to be effective.)  Getting back to the importance of finding a basketball starter drug, take Rick Barry and Bill Russell for instance.  Until reading his book, I had no idea the following train wreck took place:

Upon reading the book's story about that little ditty, I looked it up on line which led me to watch all sorts of clips about the 81 Celtics and Rick Barry.  It's a bit like listening to Rush and heading straight to The Google to figure out just how wrong the guy is while learning something new.  I imagine this ability to generate a quick response is part of what makes guys like Simmons and Rush so popular.  At the end of the day guys like Bill Simmons and Rush are about immediate audiences, not long term goals and Big Pictures.  They are about the targets in front of their faces and any attempt to reach back for historical analysis should be taken with that in mind. Simmons and Rush are no-stats all stars; their selfishness is explainable, understandable, and most of all, entertaining.

Getting around to specific content, the highlight of the book is its "what if" section (What if Len Bias didn't overdose?; What if Memphis instead of Cleveland landed LeBron?; etc), and the lists of top players and teams in league history.  These are the parts of the book where you can read for 10 minutes, put the book down, and then go argue with a friend about what you just read.  It's a fantastic collection of conversation starters.  Simmons does a good job of giving guys their due credit (Scottie Pippen), overrating a few modern players (Tim Duncan is not the 7th best player in the history of the league and 3 guys from the 08/09 campaign did not have Sistine Chapel seasons), and taking strong stands on the big issues of recent NBA history (Magic v. Larry; were the 2001 Lakers better than the 96 Bulls?; etc).  His logic is more often than not clear and consistent and his ability to properly place different NBA eras into a workable and understandable context is both admirable and welcome (hint: comedy and porn have eerie similarities to the different eras of the league). It's also filled to the gills with "are you kidding me?!" moments that, funny, keep you turning the pages and coming back for more (I, for one, think he misses the central point of the KG vs. Duncan debate: When surrounded with at least 2 above average players KG goes to the WCF and wins a championship...exactly what Duncan did.)

Wrapping this thing up, me wanting more out of this book is a problem of perspective on my part, not the writer's.  The best thing I can say about it is that I have bought 3 copies of it for gifts to friends and family.  It's a gold mine of conversation for a good 2+ seasons and regardless of its artistic worth it selfishly draws you in and holds your attention.  I know it's not the best, but it's definitely worth the price of admission.