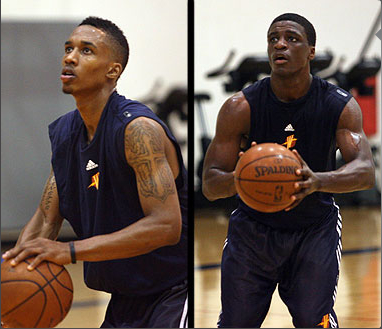 Remember all of those point guard Battle Royales that happened across the country right before the draft?  The first regular season version happens tonight when Brandon Jennings and the Milwaukee Bucks come to the Target Center to take on Jonny Flynn and Our Beloved Puppies.

That being said, I had him pegged ahead of Jonny Flynn before the draft and I even wrote this:

If the Wolves want to swing for the fences with a young EL point guard, they should just sit at 6 and take Brandon Jennings.  This one came up in the comments and I thought it would be a nice above-the-fold topic.  Both Jennings and Rubio have big-time boom/bust potential but for different reasons.  Jennings is blessed with what would probably be the best athleticism and quickness at his position the moment he steps on an NBA court.  He has tremendous court vision and he can also score.  On the other hand, he doesn't shoot well, he isn't all that strong, and there have been questions about his maturity.  Rubio was on the Spanish Olympic team and he has the best assist numbers in the EL.  He is also an oft-injured 18 year old point with a poor jumper, no strength, average (at best) athleticism and no experience playing an NBA-style game.  Both players will likely take 2-3 years to become acclimated to the league.  Both players have significant flaws.  Both players have amazing ceilings.  Both are YouTube heroes. One will likely go at the #2 spot in the draft while the other will be available at 6.  My personal opinion is that Jennings has the physical tools to become a better NBA player and that he will cost significantly less than Rubio.  His bust-level is Bassy but he would bust without selling the farm to get him while Rubio's bust level is Jason Williams or Rafer Alston and...well, he's going to come at a cost.

We all know the cost of Rubio: Mike Miller and Randy Foye.  Will he be worth it?  I have no idea. Will Brandon Jennings be to Rubio/Flynn what Brook Lopez was to Kevin Love and Brandon Roy was to Randy Foye?  We'll just have to wait and see.  What we do know is that Jennings is off to a start that will make that question an uncomfortable one if he continues to perform at this high of a level.  Lucky for us fans, chances are that we're looking at a 3-5 game hot streak rather than the player we'll see after 30 games, but it certainly is a good talker at the moment.

I will always have a special place in my NBA heart for Jennings because of what he did to the NCAA .  I hope he succeeds because I would like to see more gifted players earn money for their skills instead of lining the bank accounts of university presidents and CBS.  That being said, something has to give with the shooting.  Take a look at what we wrote about Jennings' EL stats using a John Hollinger conversion formula:

Plugging Jennings' EL numbers into this formula, we get a line of 11.6 points/40 minutes, an assist rate of 27.5, a shooting percentage of 34.1, and a 9.1 PER.  Again, keep in mind that we're talking about a 19 year old player in the 2nd toughest professional league on the planet.

This site has never made an attempt to rate EL prospects because we have neither the time nor resources to do so, but there are a few things we can determine about Jennings' game.  First, he doesn't shoot the three well at all.  He has a 26.8% fg% from beyond the arc in the EL while taking 5.2 attempts per 40 minutes.  37% of his shots are from beyond the arc.  Scoring wise, he posts 0.99 points/possession while turning the ball over 0.16/possession.  He has a 1.37 a/to rate with a -0.59 PPR.  The problem here is that while I have a pretty good idea of what these numbers would mean in the NCAA, I have zero clue what they mean in the EL.  My gut tells me the shooting numbers are worrisome.  He does shoot 45.7% from 2, but the outside shooting is problematic.  The Wolves already have an undersized guard with amazing quickness who can't shoot from outside.

Where Jennings may have a hand up on Bassy is that he appears to have something of a mid-range game and/or an ability to score close to the hoop.  My guess is that his assist/play making numbers are pretty solid considering where he plays and the amount of time he receives on the court.  That being said, I don't know and I wish I had a better way of letting you know more about his game via the stat sheet.

The interesting stat here is Jennings' large reliance on the three ball, even in limited action.  In 3 NBA games 26% of his shots have come from beyond the arc.  That's fine and dandy when you're Steve Nash and can shoot well above 40% from 3.  It's a really good thing when you are making .500 of your attempts and not getting a ton of trips to the line.

Jennings is not going to maintain his current shooting levels.  The big test for Jennings will be how he adjusts when the shot isn't going down.  Will he have a decent A/TO ratio?  Will he continue to be disruptive on defense?  Will he be able to get open looks for his teammates?  Can he take the beating that comes with getting to the line in the NBA as a small PG?

For a Milwaukee perspective on tonight's tilt, head on over to Brew Hoop.