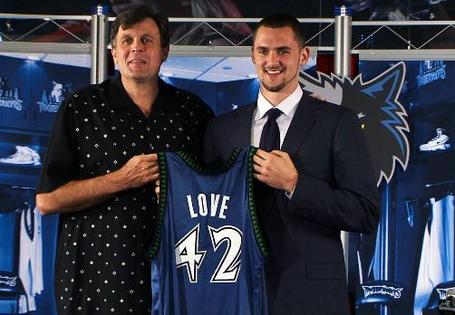 OK, it's starting to add up.  Losing Kevin Love and his .208 WP48, 4.1 FTA/game, league-leading 15.1 oreb%,  top-10 dreb%, and #2 overall reb% hurts.  The team is already in the performance hole with the loss of Mike Miller's minutes at the off-guard, but losing Love's 30+ mpg to Oleksiy Pecherov and Ryan Hollins is costing this team the production it should have when the White Hole and Antigravity replace the minutes formerly used up by Craig Smith and Shelden Williams/Jason Collins.  Yes, the two 7-footers are putting decent numbers, but they would even better if they were moved down a notch on the depth chart.

Last night the Wolves were a -9 on the offensive glass.  It was even uglier when you calculated the percentage of available misses grabbed by the X-mas tree color clad visitors.  The Bucks grabbed an astounding 36.2% of available misses on the offensive end of the court compared to the Wolves' 19%.  If you can grab 1/3 of your misses, and you have a big beastie like Andrew Bogut in the paint, chances are a decent number of those misses are headed right into the bucket.

In just 6 short games the Wolves are getting destroyed at the 4/5 in the rebounding department, averaging -7.4 reb/game between the two positions.  Last year, the team was a net 1.6 positive at the power forward and center. Granted, you can't view these numbers in a vacuum and the loss of Mike Miller is going to cause opposing bigs to get their grubby mitts on a few extra balls per game, but the overall point I'm making here is that losing one of the NBA's top 2-3 rebounders hurts in a bad way and the Wolves are starting to see the effect of this much production lost over even a short period of 6 games.  We're already approaching the time where we can start talking about how Love's departure has cost the team 1 win.  Of course, what they are losing in rebounding they could be making up in defense and we'll have to wait and see how the balance plays out.  There are a lot of factors that play into something like this and I don't want to make a blanket statement, but I'll say it again: losing a top-flight rebounder when trying to rehab a center on the fly next to two new frontcourt players is going to have an impact, possibly a big one...relatively speaking.

Speaking of stats, Knickerblogger and 82Games are now updated for the current season.  The early returns are that the White Hole is playing pretty well and that Jefferson is a pretty average (at best) player right now.  Corey Brewer isn't rebounding his position nearly as well as Mike Miller did, Ryan Gomes has picked up some of the rebounding slack, and Jonny Flynn is a good scorer but a, thus far, lousy facilitator.

Speaking of Mr. Flynn and the anticipated PGBR (Point Guard Battle Royale), he scored 12 of his 20 points in the final 9:40 of the game, well after the game was decided.  This isn't a complaint.  Rather, it's a hope that the Wolves quickly figure out that Mr. Flynn can get pretty much wherever he wants to go with the ball in the 1/2 court and that he might be the team's best scoring option when the offense isn't clicking.  In other words, when they start a quarter on a -8 run and nothing seems to be working, Flynn might be a more attractive offensive option than what Big Al is currently bringing to the mix.  Flynn's PPR is a terrible -4.5 at the moment.  Hopefully he'll begin to figure out the facilitation thing but for the time being he's a scorer, and a fairly decent one for having just 6 games under his belt.  What I'm getting at here is that if Flynn is going to be a scorer, part of his development will be to figure out when to take it to the rim on 4 or 5 straight possessions when the game is still on the line, not when it's already decided. BTW: Here's hoping and praying that 4th Quarter Flynn never makes its way of the Wolves' PR Department's lexicon.

A few bullet points to wrap things up:

This game is kind of spooky...

Yesterday I put up a post about Rick Kamla's questionable comment about Yi Jianlian and my disbelief that he could continue to do interviews on outlets like KFAN and not be questioned about his remarks.  In the interest of a greater context, I would like to point out that there is a much, much, much bigger black eye in the NBA right now and his name is Donald Sterling.

Nov. 3 (Bloomberg) -- Donald Sterling, owner of the National Basketball Association’s Los Angeles Clippers, agreed to pay $2.73 million to settle a U.S. government lawsuit in which he was accused of housing discrimination.

The payment is the largest ever obtained by the government in a discrimination case involving apartment rentals, the Justice Department said today in a statement.

"Housing is a basic human need, and yet decades after passage of the Fair Housing Act far too many still encounter barriers like discrimination," Assistant Attorney General Thomas E. Perez said in the statement. "The magnitude of this settlement should send a message to all landlords that we will vigorously pursue violations of the Fair Housing Act."

The government sued Sterling in August 2006, saying he discriminates against black and Hispanic prospective tenants in buildings he owns in Los Angeles’s Koreatown area. Sterling owns about 119 apartment buildings in Los Angeles County, according to the Justice Department’s statement.

Sterling is a slumlord who likes to pay for sex:

Donald Sterling, the miserly tycoon who owns the Los Angeles Clippers, testified last year that he regularly paid a Beverly Hills woman for sex, describing her as a $500-a-trick "freak" with whom he coupled "all over my building, in my bathroom, upstairs, in the corner, in the elevator." Sterling's graphic testimony--which came during a two-day pretrial deposition in connection with a lawsuit he filed against the woman, Alexandra Castro--will surely nettle basketball commissioner David Stern, who normally has to explain away the behavior of 20-something athletes, not married 70-year-old club owners worth nearly a billion.

It kind of puts the dress code in an entirely new context, doesn't it?

There's more.  The ultimate must-read article in the Sterling collection is this ESPN ditty, which contains the following gems:

"For years he has run semianonymous ads (crude design jobs he reportedly locks up himself) seeking 'hostesses' for Clippers events and his private parties. ... According to testimony Jaksy gave under oath, Sterling touched her in ways that made her uncomfortable and asked her to visit friends of his for sex. Sterling also repeatedly ordered her to find massage therapists to service him sexually, telling her, 'I want someone who will, you know, let me put it in or who [will] suck on it.'"

"When Sterling first bought the Ardmore, he remarked on its odor to Davenport. 'That's because of all the blacks in this building, they smell, they're not clean,' he said, according to Davenport's testimony. 'And it's because of all of the Mexicans that just sit around and smoke and drink all day.' He added: 'So we have to get them out of here.' ...[Kandynce] Jones had repeatedly walked to the apartment manager's office to plead for assistance, according to sworn testimony given by her daughter Ebony Jones in the Housing Rights Center case. Kandynce Jones' refrigerator dripped, her dishwasher was broken, and her apartment was always cold. Now it had flooded. Davenport reported what she saw to Sterling, and according to her testimony, he asked: 'Is she one of those black people that stink?' When Davenport told Sterling that Jones wanted to be reimbursed for the water damage and compensated for her ruined property, he replied: 'I am not going to do that. Just evict the bitch.'"

Deadspin has more.  As long as this man owns an NBA team, anything that comes out of David Stern's mouth about player conduct should be taken with an appropriately large grain of salt.  BTW: It's kind of amazing that such a big stink was made about Rush Limbaugh owning an NFL team when guys like Sterling are around.

BTW: Here are the Four Factors of last night's game: