Alternate Realities in the Timberwolves' Universe

Share All sharing options for: Alternate Realities in the Timberwolves' Universe 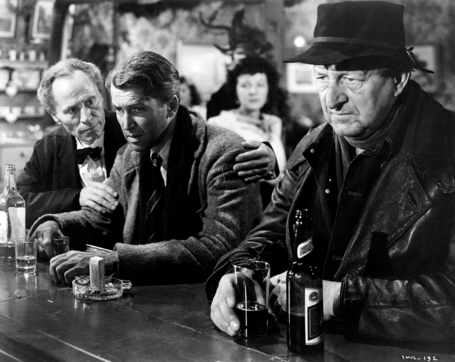 Now that Thanksgiving's over, it's ok to put up your Christmas lights (or winter decorations for any holiday you celebrate). In my family, it also means watching It's a Wonderful Life. If you hate America and therefore haven't seen it you can watch the whole thing here. Suffice to say that George Bailey is a man who runs into serious money problems and decides to jump off a bridge. But instead of plummeting to his death, Bailey is saved by Clarence the Angel. Clarence then does George a "solid" by showing him the world as if it had never been graced by George's presence.

Like Mr. Bailey, Wolves General Manager David Kahn has gotten some people angry with him as the team's 1-15 start has been softened only slightly by the recent win in Denver. After all, Kahn is the man responsible for acquiring 2/3 of the players on this year's roster. The criticism of Kahn includes, implicitly or explicitly, the assertion that the Wolves would be better off without some or all of the moves he made.

So to get us in the holiday spirit, let's consider life for the Timberwolves had this summer gone differently (whether David Kahn exists or not is immaterial at this point, so the tie-in to It's a Wonderful Life weakens... let's just move one).

What follows are scenarios of varying plausibility with the corresponding win shares (defined here) and contract commitments (see here for details on options and such).

Thanks, as always, to Basketball-Reference.com for being the best stats site for the NBA. And for more Wolves What Ifs, check out Mike's recent post at TWolvesBlog. Thanks to Mike for getting me to finish my earlier draft of this post.

[EDIT: Not sure why I had the record wrong, thanks commenters.]

Before diving into rampant speculation, it's worth talking a bit about what they're based on: win shares. Did you read the linked explanation? If you're unfamiliar with win shares, do it. The biggest caveat mentioned in that article is attributing team success to individual players doesn't necessarily work. This is an obvious problem in the scenarios below, as Shelden Williams is one of the biggest win producers. Do  you think Williams earned his 1.2 wins all by his lonesome, or is it possible Kevin Garnett, Paul Pierce, Ray Allen, Rajon Rondo, Rasheed Wallace and Kendrick Perkins might help Williams' win share production? Right. Likewise, Corey Brewer's -0.3 win shares could be explained largely by his logging the most minutes on a team with only two wins, or it could be that the team only has two wins because Corey's playing so much. Such is the nature of win shares.

Here we sit after a whirlwind offseason, a couple quality players worth building around, some expiring contracts, some future picks, the rights to Ricky Rubio, and 2 measly wins. The future's bright, but the present is a complete downer.

The trades with Washington or the LA Clippers never happened, nor was Ty Lawson traded to Denver. The the same picks at #6, #18 and #28 were made. In free agency the Wolves held on to Shelden Williams, Kevin Ollie, and Rodney Carney, but let Jason Collins walk. Facing roster glut, Bobby Brown and Mark Madsen were cut. This was in spite of Brown's superior performance to Corey Brewer and Wayne Ellington thus far due to financial commitments.

Maintaining last year's roster may have improved the team's record to 6-11, but the franchise won't be players in next year's free agency bonanza (unless they let Miller, Smith, Foye and others walk for nothing) and there are four players (Ollie, Flynn, Lawson and Telfair) who require minutes at the point. They also don't have Ricky Rubio's rights and you may notice that they're actually committed less salary in this scenario than in reality. It's not a huge improvement in the win column, but it's an improvement none the less and the future is still rather bright. But we can do better.

In this scenario, the trades with Washington, the Clippers or Denver still don't go down and the Wolves have draft magic that allow them to draft the player with the most win shares from amongst the pool of available players (with this method, their 2nd round picks would have been AJ Price and Lester Hudson. Each has a win share equal to Brian Cardinal and therefore wouldn't have improved this scenario). Free agency, as before, brings back Williams, Ollie and Carney and shuns Collins. Madsen and Brown are cut.

8.3 wins ain't too shabby, bringing the Wolves' to an 8-9 record. This scenario presents the same 2010 free agency problem as the previous one, but the future is a tad brighter with Jennings, Lawson and Blair instead of Flynn, Ellington and a future 1st. The point guard glut also still exists, merely swapping Jennings for Flynn. I know what you're thinking: we can do better. And you're right.

Corey Brewer's win share total of -0.3 is the worst among all players considered in this experiment, so forget his option and cut him. Ramon Sessions and Ryan Hollins, on the other hand, are in the top 14 in win shares for all of the considered players, so they're worth using the MLE on. Unfortunately, that means eating Brian Cardinal's salary, in addition to Madsen and Brown. But, hey, we're in this for wins, right?

This is the most expensive of the scenarios and the 2010 free agency problem remains. In fact, the Wolves eat $9.6 million more than in the previous scenario and only gain 1 win (9-8). That's probably not something that would impress Glen Taylor or fans. And, stop me if you've heard this before, but the team's got Jennings, Lawson, Sessions, Ollie and Telfair seeking minutes at point guard. That is, at least, if you want to reap their win shares in the total.

These alternate realities may be attractive to fans concerned about the win column, since a 2-15 start does little to build excitement for the current season. But there are some fatal flaws in calling Kahn's summer a bust this. First, you probably noticed that picking the best player at each opportunity in the draft is highly unlikely. Moreover, it's far too early to determine which rookies were better picks. I've also pointed out the point guard glut that a reliance on win shares creates. Lastly, another flaw with the Win-share-way-back-machine Model (that's trademarked, by the way) arises from the depth chart: the sum of minutes needed by each player to achieve their win share is likely higher than minutes available.

Even if David Kahn had made what appear now to be the right moves, the Wolves would be about a .500 team, they'd be out of the 2010 free agency class, they wouldn't have the rights to Ricky Rubio, they wouldn't have enough minutes to go around to an unbalanced roster, and they look like a team whose peak is the Western Conference Semifinals.

If that doesn't make you feel better, go watch It's a Wonderful Life and curse that evil Mr. Potter.