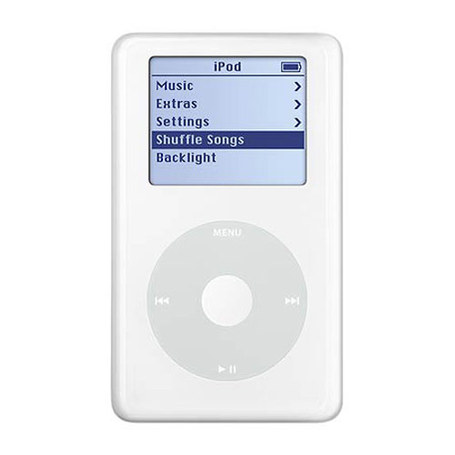 I know I promised a double game wrap so let's quickly deal with the Laker game before moving along to the tilt that, unfortunately, says the most about Our Beloved Puppies: The Lakers are the best team in the NBA and there is no shame in losing to a team that could end up as one of the all-time greats.  The end.  As for the Kings...

I'm a big Apple fan but one of the things I can't stand the most about the company is their willingness to spring new products on their consumers with little or no warning.  My personal experience dates back to the little iPod you see above.  I went out and bought that little doohicky about a week, maybe two, before the iPod video launched.

I enjoyed my iPod.  It iPoded well and was able to hold nearly all of my music.  Yet, it probably became irrelevant at just about the time I bought it.

And so begins the career of Jonny Flynn in a league with Tyreke Evans.

I'm not really sure what the correct word is for what Evans did to Flynn last night but here are several that I think should qualify for a chance at the title: eaten, mangled, transmorgified, cold-cocked, and stampled (I made this one up).  Whatever it is, I'm sure we Wolves fans will have more than enough up-close opportunities to figure it out over the next however many years.

The most disappointing thing about last night's game wasn't the action on the court.  The Wolves played well early on their 4th game in 5 nights spanning from Toronto to Minneapolis to LA to Sacramento and they lost Ryan Gomes to an ugly ankle injury.  It was one of those games where you can probably talk yourself into chalking the loss up to a little bit of a lack of effort, a little bit of indifference, and a whole lot of "let's get out of here".   What was most disappointing about the game is that for all the talk of two top draft picks, Ricky Rubio, and future assets, the Kings--a franchise that was below the crap-ass level of the 2008/09 Wolves--fell into a bit of luck (see Evans, Tyreke) and are now miles and miles and miles beyond the Wolves.  A bad game is a bad game is a bad game is a bad game (believe me, I watch the Wolves) but last night's demolition was something more.  It was a realization that the Kings have something that cannot be answered by Jonny Flynn or Ricky Rubio....to say nothing of what Jason Thompson and a legit 7 footer (Spencer Hawes) means for the Wolves' front line.

For 4 quarters Evans had his way with the Wolves' back court.  From post ups to Manu-esque below-the-rim drives to the hoop the guy got what he wanted when he wanted it and he did so primarily because of his physicality.  He physically dominated his position more than anyone else on the court.  I know we talked about his physical upside in the lead up to the draft but....well, there it was on full display.  The guy is LeBron James at the point, and yes, I went there.  Maybe Manu with muscles is more like it. Congrats to the Kings for finding the bit of luck that all franchises need to make the big jump from level to level.

Who is that guy for the Wolves?  Well, if there is one thing to hope for it is that John Calipari can go 3-3 with dominant lead guards in the NBA Draft.  If Derrick Rose is the speedster and Tyreke Evans is the physical powerhouse, here's hoping that John Wall is a magical combination of the two and that the Wolves finally end up with the top pick.

Wrapping this up, last night's loss had more to do with roster management than anything else.  The Wolves have fallen behind yet another young bad team that they were ostensibly ahead of last season.   At least they didn't find themselves in this position because they passed on or traded Evans in the draft.  Kahn's got that going for him.