Share All sharing options for: The Four Stages of Randy Foye Grief 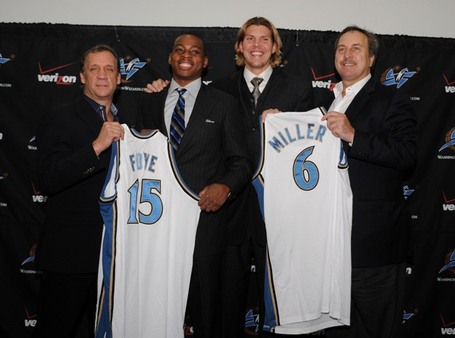 I'm stealing this line from Feral:

It took [Wizards fans] about a month of actual play to go through all the stages of Foye grief. Randy can be an effective point guard…. Randy is like Billups, who also took some time….. We can go with two "lead guard" hybrid types…. Randy is probably best as juice off the bench.

Unfortunately for Wiz fans, the Mike Miller grief cycle gets stuck up in the anger phase.  I think it has something to do with a refusal to shoot the ball and a once-a-game attempt to look as though he is performing some sort of world-saving service by grimacing his way through the pain.

Getting back to Foye for a second, he could have been something of a sympathetic character in Wolves lore were it not for idiotic statements like this:

"I understand he was Rookie of the Year. I understand I got hurt my second year. But you look at how I progressed and you look at the past rookies there -- besides Kevin Love -- and how I was making progress, I felt I was right there."

When it came to talking about the deal, Foye has long walked a fine line between bravado and downright stupidity.  He's clearly walking on the wrong side of that line these days.

Anywho, the Wolves have now won two in a row for the first time since last April when they did in the Clips and the Warriors on back-to-back nights.  This time around they were able to triumph over the awful Nets and the what-in-the-hell-is-going-on-with-them Wizards.

Thanks to the fact that this wonderful little tilt was the national broadcast on NBA TV, and thanks to our local cable package not carrying Channel 45, yours truly was only able to catch the first quarter and a half and the last quarter and a half of action.  Many thanks to the pirated stream and my favorite local watering hole for getting me through the one game of the year where League Pass falls flat on its face.

Without any attempt to bring it all together, here are my notes from last night's game:

Well, that about does it.  My only other thoughts from the game were a never ending string of wonderment that Gilbert Arenas was able to garner himself a max deal.  When a player of Arenas' quality can get that type of green, I think it says a lot about the financial state of the NBA.