And now for something completely different...a few thoughts on Tiger

Share All sharing options for: And now for something completely different...a few thoughts on Tiger 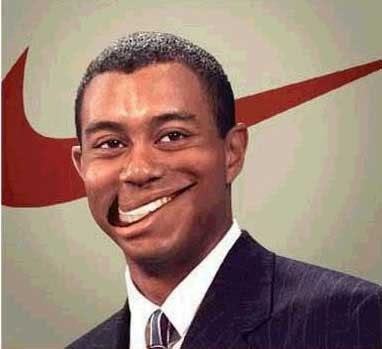 I can pinpoint the exact moment I started hating Tiger Woods.

It was the first week of April, 2009 and I was sitting in the large and metallic office of my former boss, a lower-middle manager at a well-known national corporation.  Two months prior to this early April meeting my boss was conspicuously called away to corporate headquarters for what he pitched as an "exclusive and important" meeting about the future of the company.  One month prior to the April meeting my boss's boss was conspicuously summoned to corporate headquarters for what he pitched to his minions as an "urgent and uniquely strategic meeting about the future of the organization". (As a quick side-note, this little timeline definitely says something about advancement in corporate America.  If you are interested in making the move from lower middle management to middle middle management, it is imperative that you learn how to dress up your superiors' bullshit in exceedingly flowery language.) Two weeks prior to the April meeting my boss, my boss's boss, my boss's boss's boss, and all of their minions were summoned to the building's auditorium where we heard a pre-recorded message from our company's CEO about his decision to sell the company, as well as a brief lecture on all of the sad emotions that come along with making a deal that netted his bank account tens of millions of dollars.

The time in between my boss's meeting and the multi-media break-up lunch time presentation can roughly be described as a never ending parade of downwardly rolling shit.  Somewhere around Christmas time someone high up in the corporate office figured out that it was about time to sell the company for a massive profit and he (or she) knew that an increase in sales would not only increase the bottom line of the transaction, but it would also be a fabulous way for the purchasing company to have a concrete method of purging undesirable employees from the new entity  following the completion of the sale.

The word went out and new numbers were demanded from markets that had been performing at a steady clip for years and years, and from which no new performance metrics were expected.  Lower middle managers were brought in to corporate HQ, given the dog and pony show (complete with pep talks from upper management for added effect), and then sent back to their already-mined territories to put the screws on their underlings.  When that, surprisingly, didn't work, middle middle managers were summoned to HQ, given a night out on the town with their corporate masters (who delivered a very personalized version of the "someday this could be you" speech to $75,000 boys with dreams of being $150,000 men), and then released upon the lower middle level managers who failed to get their underlings to deliver what upper management wanted from their underlings....or something like that.

Getting back to the timeline, one week before my April meeting in the large and metallic office of my middle manager boss, my sales team was called into a special meeting with some consultants from the company who had just purchased us out and we were told that our performances and records were all being carefully examined and that we would soon find out where we would be "mapped" into the structure of the new organization.  After an hour or two of pointed questioning, we underlings were able to gather the following information:

On the day of my early April meeting I was sitting at my desk, enjoying a cup of coffee with a fellow yet-to-be-mapped co-worker when my boss's secretary came into our cubicle area with a sad look on her face and a handful of sealed envelopes that she handed to my co-worker, our two other cubicle mates, and me.  We all looked at the letter for a moment before I said "do you think it says 'get out' or get the f-out'" and tore into what we all knew was step number one in our quick march to the unemployment line.

so that you and

can meet and discuss all of the

I showed up at the large and metallic office at 10:30 A.M. and was met by a short, well-dressed man who introduced himself as the Regional Sales Manager, and a distractingly overweight woman who was outfitted as though she were 60 pounds lighter than she really was who was introduced as "being from HR".

After a few awkward attempts by the Regional Sales Manager to find out about my family and me I tuned the little douchebag out and focused on what appeared to be a new addition to the wall behind my boss's desk: a large framed motivational poster with bright white lettering spelling out the word  "DRIVEN," which was directly below the following photograph: 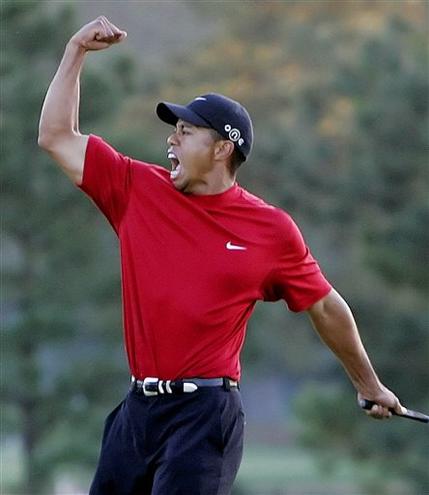 I honestly cannot tell you what was written below DRIVEN because the large HR lady repositioned herself behind the Regional Manager and because I was distracted by the large Nike golf bag in the corner of the office (adorned with Nike fairway wood club covers, Nike towels, and a plush tiger driver cover), a Nike golf jacket on the edge of the desk between the Regional Manager's mobile phone and his laptop computer, a book about Earl Woods (Tiger's father) resting near the fat forearm of the mute woman from HR and some curious words of parting wisdom from the Regional Manager.

"Thanks, I'm sure you've done this enough where I should view that as being the most true thing you'll tell me all day."

"Only when others pay. I'm not good enough to spend my own money on that much of a mess. I suppose there's a lot of that going around."

"Do you know that after Tiger Woods won his first Masters he completely retooled his swing because he knew that he could never be as good as he could possibly be if he stuck with his old swing?"

"Doesn't it? The point here is that Tiger was never satisfied to rest on his laurels.  He knew that in order to maximize his unique skill set he had to completely recalibrate his mindset and mechanics."

"Mindset and mechanics, got it."

"He retooled his game and went on to win the Tiger Slam.  I want you to retool your game and win the Nate Slam."

"Retool my mechanics, Nate Slam, got it."

"Susan will need your badge when you leave but before we do that we need you to sign this paperwork."

Tiger Woods is not a person.  Tiger Woods is a brand.  It is a carefully manicured set of fuzzy principles and generic corporate ethics that is bottled up and sold by a man who, apparently, has a thing for sexting, swearing at photographers and hounding around on his wife. My guess is that these qualities can also be assigned to my former Regional Sales Manager but I cannot say for sure, as I highly doubt that he has a New Zelander caddy following him around on the links.

Tiger Woods exists not to play golf at an unbelievably high level, but solely as a device to separate you from what is in your wallet with a dash of Tom Peters quotes, a pinch of IMG management, and a heaping dollop of corporate sponsorships.

When I was handed a pink slip by a Regional Manager with a hard-on for little Eldrick Woods I ended up having a few weeks with a whole lot of time on my hands.  When I was not job hunting I was reading all I could about Tiger Woods. The thing that most amazed me about the man was not his otherworldly abilities on the golf course (and he really is something to behold with a club in his hands) but the blatant way in which Eldrick's brand has been positioned as nothing other than a machine to move as much product as possible, and how no one really seems to give a damn about this.

The transparency of the bullshit surrounding Woods is simply stunning.  From the words of wisdom from his con man father to the mythology surrounding his "creation" as a player, "Tiger Woods" is a series of corporate board decisions that are as precisely calculated as an Eldrick Woods 8 iron from 180 yards out to get you, the consumer, to rationalize spending tens, if not hundreds of percentage points above cost on everything from golf balls, to posters, to management theory books, to clothing, to shaving cream and beyond.

Perhaps it is fitting that Tiger Woods, the brand, is one of the leading symbols of modern corporate America.  With the financial pages being filled with nothing other than stories about greed and grift, perhaps Tiger Woods was created to meet the demands of its audience rather than being a culture-driving force of its own.

Whatever the case, the "value" associated with a brand built on the back of a fake-thug=caddy-accompanied golfer with a penchant for bad taste humor, lots of yelling, and screwing women he is not married to represents something of a moral ponzi scheme. The only way a multi-millionaire golfer becomes a billionaire brand is if people look the other way and knowingly sell something they know is not as something they would have others believe it is.

Screw those people.  Screw them all to hell.

How do you know I am hitting the mark?  Take a look at how Tiger's fellow golfers/financial beneficiaries are reacting to the news that Eldrick doesn't exactly live up to Tiger's reputation.  Nobody except for the chivalrous Jesper Parnevik seems to have the cajones to forgo a lifetime of appearances in Golf Digest and the sponsor's tent to say what needs to be said: Eldrick Woods is a terrible human being that bares little resemblance to the corporate monstrosity that moves billions of dollars of overpriced golf equipment and cars.  You know, the guy who gets turned into a cartoon kid (Little Tiger) to sell overpriced sports drinks.

Do you remember when everyone got their undies in a bunch about the Stop Snitchin' movement because it became a hip-hop slogan popular with drug dealers? Do you really want to know why a bunch of rich white golfers aren't saying shit about Tiger even though you know damn well that they all have a Eldrick hound dog story of their own?  I'll give you a hint: It has to do with millions and millions of sponsorship dollars and tour prizes.  The PGA: Where No Snitchin' Happens.