Share All sharing options for: The Bill Clinton Test 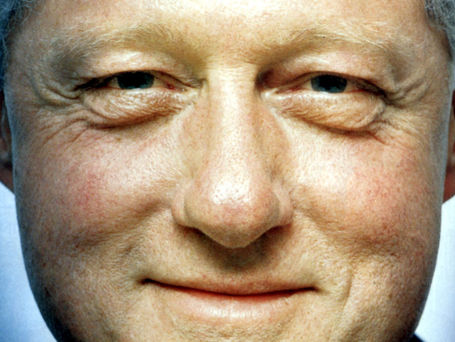 "There is nothing wrong with America that cannot be cured by what is right with America."
-President Bill Clinton
Had a young bill Clinton grown up with aspirations to lead the world's greatest basketball league instead of becoming President, I think it is pretty safe to say that a Commissioner Clinton would have rewritten this quote by substituting "NBA" for "America" and that last night's game between the Wolves and the Hornets would be one of the great challenges to this basic claim.
Let's begin with what is right.  We were treated to an entertaining contest with a command performance from one of the best players in the league.  There was the return of a phenomenal talent, flashy play, hustle, flash, broad themes and story lines.
On the other hand, we also had to endure WWE-esque referring, rosters that cause fans to think more about cap space and expiring contracts than championships, awful bench players and two entire squads that could probably be combined into a single squad that would likely be unable to contend for their crippling lack of proficiency at a key position (in this case, the wing).
Was the game entertaining? Yes, but there was always an undercurrent of pure nonsense that was very hard to ignore.
Anywho...the first notable thing about the action on the court was Jonny Flynn being given an up-close and personal view of what the very best point guard in the league looks like.  Chris Paul's PG lesson began at the opening tip and did not end until the final buzzer.  Each and every thing he did should be put into a downloadable mp4 that Flynn can put on his iPod and watch over and over and over and over.  Where Flynn received the ball in the 1/2 court and paused for a moment or two to digest the action, Paul demands the ball and immediately shoots into action.  Where Flynn uses his body to jump into larger players to minimize his defender's ability to jump while going for a shot, Paul uses his body to position himself between his defender and the rim in order to maximize favorable angles towards the hoop that allow for both better scoring and passing options.  Where Flynn is able to dribble along the baseline and throw passes across the lane to the perimeter, Paul keeps his dribble deep into the lane causing the defense to collapse and open up much more favorable passing lanes.  Paul put on a point guard clinic last night.  At one point near the 1/2 he had 12 assists on 27 made Hornets shots.  He ended the game with 15 assists on 39 made shots.  In other words, even more so than the Cleveland LeBron's, New Orleans deserves to have a new nickname. And that's the rub.
I know that Dave Berri has already weighed in on the subject but I would like to add my two cents about it: Chris Paul is the back court version of Kevin Garnett.  My only question right now about this analogy is what post-04 WCF year Paul is in with the Hornets?  Just how far along on the process of decay are David West and Emeka Okafor compared to their back court doppelgangers of Sam Cassell and Latrel Sprewell?  With their GM now at the end of the bench have they advanced to the time of Flip's firing?  Will they attempt to move Peja's contract for an even longer deal and then lock themselves into a contract hell every bit as garish as what we saw here in Minny about 4-5 years ago?  Hornets fans, I feel for you.  There may still be time to get something out a historical player like Paul but I have the bad feeling that you will continue to see diminishing returns in his front court partners while causing an ever-increasing salary cap tragedy.  Here's hoping the NOLA Pauls can avoid the fate of KG's Wolves.  He's a fantastic player to watch and he's in need of...well, again, the Wolves and Pauls could put together a super team and Corey Brewer and Ryan Gomes would be the best wing players.
Moving along to the other big story of the night, Kevin Love saw his first action of the season with just over 6 minutes remaining in the first.  In just under 24 minutes of action Love went 3-7 from the floor (2-3 from 3), 3-4 from the line (leading the team in attempts), 11 boards (3 offensive), 3 assists and only 2 turnovers.  He finished with a +7.  His impact was immediate and wide-spread.  From rebounds and quick outlet passes to spreading the floor with his outside shooting to putting the ball on the deck for the best dribble drive dish of the year by any Wolves player, Love simply impacted the game and it will be very interesting to see how his on/off numbers look and how he impacts the team's overall numbers.  The guy simply makes plays at a stunning rate.  He's also a massive upgrade over the minutes previously given to Ryan Hollins and Oleksiy Pecherov.  Oh, and he now wears a glove. How about bedazzling that bad boy for a Michael Jackson tribute?
Let's wrap this up with some bullet points:
Well, that about does it from my end.  What caught your eye?
Until later.