Catching up with the Lynx

Share All sharing options for: Catching up with the Lynx 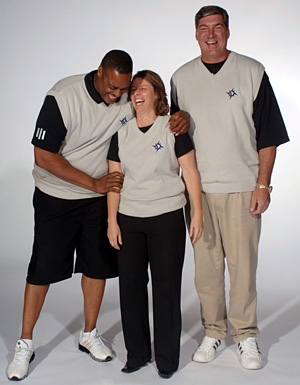 Folks, a lot has happened in Lynx-ville this week.  A lot.  Really, an absurd amount of stuff has happened for the one team in the Twin Cities that will win a league championship before anyone else...and yeah, we're looking at you Vikings.

As you may already know, the Lynx won last month's WNBA draft lottery and thanks to the New York Liberty, they have 2 of the top 5 picks in next year's draft.  For those of you following the Wolves, this is roughly the equivalent of Our Beloved Puppies being in a position to draft John Wall and Evan Turner or Cole Aldrich.

What you may not know about the Lynx is that former coach Jen Gillom did not accept a contract offer from the Lynx and appears to be on her way to accepting the head coaching position in Los Angeles. Here's Lynx VP Roger Griffith on Gillom and the Sparks (taken from yesterday's press conference):

At the end of the season that's the direction (bringing herback) we thought we were going. We had an extended period of a negotiation with her that just did not come to fruition. The LA Sparks, Jennifer and her agent requested the opportunity to be able to speak to each other, and consistent with what we've always done here, when people want different opportunities we're always open to that, so we allowed that door to be open for Jennifer to talk to them. I don't know where that process is at, I don't know where that's going, but when that happened we needed to start looking at our other alternatives. We started looking at our list of potential candidates, including the people that became available through things that happened in the league this offseason, and we started exploring our opportunities and our options. Because we need to be ready for this season. So that's kind of what happened there.

This means that the Lynx were in the market for a new coach and they promptly filled the position with former Detroit assistant coach Cheryl Reeve:

Reeve's coaching resume includes 21 years as both an assistant and head coach at the collegiate and WNBA levels, including a five-year stint as head coach at Indiana State from 1995 to 2000.

She spent the past nine years with the Detroit Shock, helping them to three WNBA championships.

Here is Roger Griffith on Laimbeer's role in the process:

It kind of went in two phases. The first phase, when we needed to start that background look into who our candidates might be, I had conversations with Bill saying "who would be on your list, who are the people that have experience in this league, that from your experience in this league you would consider candidates?" At first, I would say he gave very honest and insightful impressions, and Cheryl is one of the people who would have been on my list based on the factors we talked about with the resume. He gave very insightful, analytical feedback - what type of coach she is, what type of person she is, what she did for him in terms of practice and preparation and all those things. Once we got to the point where we were talking to Cheryl and interviewing her, then he switched to a fan; then he switched to more of a supporter and he was hoping and rooting for her. But at that point I kind of started ignoring what he was saying, because I wanted the honest facts, not the rooting section. I think he handled it very well in terms of giving us what we needed and then becoming a rooter for Cheryl.

The other big news for the Lynx was that the WNBA announced that the Sacramento Monarchs are going to be folded and that there will be a dispersal draft on Monday.  The Lynx hold the 2nd pick in that draft.  Who are the Monarch's two best players?

That team had Nicole Powell, the former Stanford All-American who is one of the league's most underrated star players. It had Courtney Paris, the Piedmont native who had a fabulous prep career in the Bay Area spotlight along with twin sister Ashley.

So...to recap, the Lynx have a new coach, 2 of the top 5 picks in the WNBA Draft and the 2nd pick in the supplemental Sacramento draft.  To once again put this in NBA language, imagine if the Wolves were staring at drafting John Wall and Evan Turner along with picking up Jason Thompson from the Kings.  If that doesn't float your boat, imagine John Wall, Cole Aldrich and Tyreke Evans.  You get the picture.

The Lynx are in position to become a MONSTER team in the WNBA.  They already have an Olympian and 2 All Stars on the roster to go along with one of the better young point guard prospects in the league (Renee Montgomery).  I think you could make a case for them being the most stacked young professional basketball team in America.

Anywho, if you aren't already paying attention to the Lynx you need to because they will win a championship for Minnesota before anyone else.