Going back to Boston

Share All sharing options for: Going back to Boston 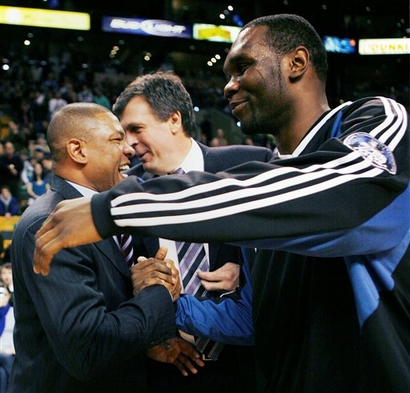 Let me tell you what: if you ever want to have the mall/shopping center/grocery store/book store/movie theater to yourself, head on out during the Super Bowl.  Yours truly just got back in from Barnes and Noble and nobody--I repeat: nobody--was there.  The world just seems to bend around Super Bowl Sunday night.  NBA games included.

The Wolves had an early tilt this morning, hitting the hardwood at 11AM CST.  Yuck.  Basketball at 11?  It just didn't seem right from the get-go, and it wasn't.  Before we continue, let's take a look at the Four Factors:

I cannot remember the last time I saw the Wolves, specifically Al Jefferson, Craig Smith, and Ryan Gomes, rebound this poorly on the defensive end of the court.  On numerous occasions these three front court players found themselves flat footed with the ball coming off the rim and zero idea where the nearest Celtic was.  It was painful to watch.  Big Al was the worst culprit of the three; hardly going after balls barely 12 inches above his head while the men in green pursued the orb like their lives depended on it.  I don't know of any other way to dress it up other than saying that effort and concentration were a huge issue on the defensive glass today.  The Wolves gave up 15 offensive rebounds.  The Celtics, who had an eFG over 50% to begin with, gathered a third of their misses.  It doesn't take a genius to see that if your opponent is making 5 out of 10 while gathering 33% of the misses, you're in a world of hurt.  The Wolves simply aren't a good enough defensive team to make up for that many second chances.

Another issue that popped up during the game was...well, I'll let Just A Fan take it over from the comments:

I hope McHale learned from his 2nd quarter rotation. Telfair, Miller, Carney, Love and Cardinal leaves us with NO SCORING OPTION in the half court. McHale used Gomes in Cardinal’s place which made a big difference at the start of the 4th. Hope we keep doing it. I think we need to change up the rotation so that at least one of Foye / Big Al is on the court at all times so we have some half court offense.

Well put.  The Wolves may have energy off the bench but Kevin Love isn't at the point yet where he can anchor the offensive side of the ball all by himself.  The Wolves need to figure out a rotation where Al or Foye are out there at all times....or hope that Miller can get things turned around on the offensive end.  Speaking of which, the always entertaining/homerish/informative Tommy Heinsohn had a few gems during the tilt; the best of which was this nugget about Miller passing the ball too damn much (and I'm paraphrasing): "They moved it well and gave up about 5 shots.  Telfair kept getting it back and he's the last guy you want to shoot the shot with the clock running down."  Here, here. Of course, as is always the case with Heinsohn, his solid points (and there are quite a few) are backed up with massive (MASSIVE!!!) amounts of homerism.  It's Hanny cubed.

The homerism is particularly annoying when it is connected to fouls.  One of the constant themes throughout anyone associated with the 86 Celtics (to include the big white guy in the picture above) is that they believe the 86 Celtics represent the pinnacle of basketball achievement.  Not only that, but they believe the 86 Celts operated in a different basketball world; a place where men were men and fouls were only fouls if they drew blood and/or caused bruises.  They may not have been the athletic specimens that you see roaming the courts of the NBA these days but they knew how to play and they were smart, damnit!

There is little point arguing with the greatness of the 86 Celts.  They are a top five all time team.  They had one of the Larry/Magic/Michael triumvirate.  They had the greatest low post scorer of all time.  And so on and so forth.  The problem with these Celts is that their basketball world view is encased in amber and it prohibits those who are especially entrenched in 86-dom (your McHales and Heinsohns) from seeing some pretty obvious modern developments.  For Tommy this means a complete lack of any ability to recognize that his home town squad mugs the hell out of people.  In Tommy's world, this is "good ol' fashioned defense".  In Tommy's world, when modern zone defensive rules are altogether ignored by the entire Celtics roster (and the refs), it is simply a "floating zone".  When Randy Foye draws contact with an aggressive drive to the rim, Tommy complains that he "jumped into" the defense and nothing should be called.  When Paul Pierce returns the favor, it is a "solid play".

I mention these things not because of sour grapes but because each and every time the Wolves play the Celtics I am reminded of the single biggest problem with the NBA: the refs.  When Patrick O'Bryant doesn't even pretend to float out to cover Brian Cardinal out by the 3 point line and instead patrols the lane with no offensive players near him, that's illegal defense (Celtics bigs are frequent violators of illegal defense rules).  There's really no doubt about it.  When Bassy is bounced through a labrynth of moving screens and grabbing hands like a pinball, that's a foul...not "hustle".  When Glen Davis is able to turn 180 degrees and take 2 steps while making a pick, that isn't a "solid pick" it's a bullshit moving screen.  When Paul Pierce nicks the elbow of a Wolves player shooting the ball, it's a foul.  I know this because Kobe Bryant got the same call on two consecutive possessions in the previous game against Randy Foye.  When Kevin Love is the beneficiary of a bad call (a Leon Powe block that was wrongly called a foul) that doesn't mean the next trip down the court merits a 100% made up make up call (a nonsense off-the-ball call on Rodney Carney).  Consistency.  Consistency, consistency, consistency.  It's one thing to listen to Tommy Heinsohn.  It's quite another to watch a group of refs call a game as if they're taking notes from his Tommy Points.   This goes both ways.  It is beyond frustrating to watch a professional league game when the reffing appears to be done on the fly.

Getting back to Big Baby Davis, I don't often resort to name calling, but Davis is a clown.  From his cheap foul from behind on Randy Foye that nearly crushed him against the basket support to his attempted tackle on Kevin Love to hit numerous hand checks and grabs to make up for his fat ass being out of position, the guy borders on being a cheap player.  It's one thing to hustle, be physical, and hand out tough fouls, it's quite another to do so in situations that don't merit such tactics.  Davis is the guy at the Y who mistakes hard hits for hustle; the one who hacks the hell out of the 9th grader who just wants to run with the big boys.  The guy could have been fouled out with moving screens by the end of the 1st quarter yet somehow he was able to stay in there the whole time.

Getting around to a positive, how much fun is it to watch Rajon Rondo control a game with only 5 points?  From defense to tempo to facilitation, the guy is a fascinating player and can really, really take over a game without scoring that many points.

Wrapping things up, this game was probably the perfect illustration of the "problem" with Ryan Gomes.  Gomes finished up the game with 17 points on 7-13 shooting and a +2.  He was the only Wolf in positive figures.  He also chased around Paul Pierce, who went off for 36.  If you look at his page over at Basketball Prospectus' new site, you'll see that Gomes has a -0.6 WARP and a dMult of 1.046.  He isn't efficient on offense and his defense isn't good enough to make up for the fact that he allows his opponents to get more than what they usually get against an "average" player.

Gomes is a fantastic member of the community, by all accounts a wonderful member of the locker room, and...a backup forward.  The Wolves need a 3, need a 3, need a 3.  They need size and athleticism at the 2/3.  They need an upgrade over Ryan Gomes at the starting position.  It's becoming more and more obvious with each passing game that a 3 is their most pressing need along with another point.

Well that about does it for the night.  Here's hoping for a better result against Indy on Tuesday.  Don't hurt yourself watching a football game with two teams who if they played in November would have barely made the 2nd 1/2 of Sports Center.  The NFL post season, ladies and gentlemen.  The worst post season in all of professional sports.