Mid-season draft board, pt iii: the swingmen and wrapping things up

Share All sharing options for: Mid-season draft board, pt iii: the swingmen and wrapping things up 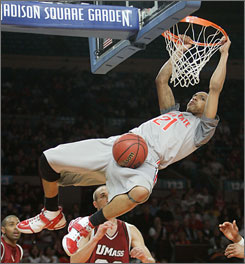 OK, time for part iii of our run through the top college prospects in the land.  You can read part i (guards) and part ii (bigs) here and here.  With no further delay, here are the top swingmen in the land with their Hoopus scores:

All in all this is a pretty underwhelming group of swingmen.  Turner and Singler are the only players worth thinking about in the 7-10 range that the Wolves will likely end up picking in.  (Ed. note: This post was written before Big Al went down for the season.) Turner is one of those guys who just seems to have his game together.  I'm not sure if he'll come out this year, but if he does, he has all the makings of a solid pro.

Singler is a Dukie.  Long time readers of this site know that I would sooner have the Wolves select an inanimate object than a Dukie.  The rest of the swingmen are fairly average players with decent parts to their game to go along with big, glaring, bright red flags.

Let's throw this thing wide open and look at the top rated players throughout all three groupings:

Putting everything all together, let's take a look at our pre-stats draft board (with inserted Hoopus Scores):

Right away you may notice the 2 bolded American college players: Aldrich and Varnado.  I left them off the main board because I don't think they'll come out this year.  If they do, they will definitely deserve some attention.  Varnado is especially interesting.  His score is built on the backs of rebounding and shot blocking, which is especially interesting because I weigh each blocked shot by .5.  He's very underdeveloped offensively and physically, but he has an absolutely uncanny ability to time his leap to block shots and get rebounds.  It's really something else to watch.

Some of the names I had on my pre-stats list are going to have to come off: Danny Green, Earl Clark and Jrue Holiday don't belong in the top 5 or the next 5.  Blake Griffin clearly, clearly, clearly deserves the top spot.  Here is how I would break down the top 5 taking into consideration non-statistical issues/needs:

Well, that about wraps it up.  I'll post an updated version of this series after the college tourney wraps up and I'll compare the numbers to last year's picks.  Until then, happy speculating and let us know what you think of the list.