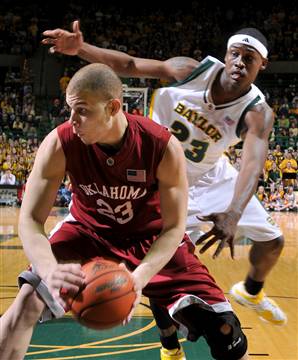 OK, this is part ii in our three part mid-season draft board series.  This time around we're dealing with college bigs.  For part i (guards) of the series click here.  With no further delay, here's how we rank the college bigs:

First of all, if the Wolves are in a position to select Blake Griffin, they do so and ask questions later.  You worry a bit about the knee brace/issues, but if you are already willing to give Craig Smith 25 mpg, then there should be no worries or second guesses about what you could do with Griffin should you decide to keep him on the squad.  He's the BPA and the Wolves should count their lucky stars if they land the #1 pick.

Following Griffin, college stat hounds Tyler Hansbrough and DeJuan Blair are putting up solid, solid numbers.  In fact, the top 4 bigs on this list all posted higher Hoopus scores than our top 3 guards.  Hansbrough and Blair offer Wolves fans an interesting choice.  Both are essentially Rhino upgrades.  Blair in particular is a monster on the offensive glass with amazing strength.  Hansbrough probably won't be as effective in the NBA because he relies so much on free throw shooting to score, but it's hard to ignore his drive and college stat sheet.  In other words, he's a Rhino upgrade as well.

As for Thabeet...well, I want to say that I'd be happy if the Wolves could land a player with that high of a score in the 7-10 range but something about Thabeet just doesn't sit right with me.  I don't know what it is, but I just don't think he'll pan out in the NBA.  Like my take on Jeff Teague, I wish I had more to back this up but something is just off about Thabeet's game.  That being said, he puts up solid numbers.

If there is one player I'm fairly certain I do not want the Wolves to take with their top pick it is B.J. Mullens.  Do. Not. Want.  A guy that big and supposedly talented should not be putting up numbers that bad.  I don't care where or how much he plays.  I suppose he could be worth a Deandre Jordan-esque flier with a later pick, but he should not be touched with the top choice at the moment. Let's take a look at some of the key stats for these 8 players:

A few things to note:

Finally, I have purposely left Bloomington Jefferson grad and current Kansas star Cole Aldrich off this list.  There has been no indication that he is going to leave school so I thought I'd keep this to guys who are on Draft Express' 2009 Mock Draft board.  In case you are wondering, Aldrich is putting up fantastic numbers, 21.319.  As the season goes along and we learn more about who is and isn't coming out of college, we can add and subtract names as we need to.  That being said, if Aldrich comes out, he will deserve serious consideration from a squad that needs another solid 30 mpg at the 4/5.

What say you about the college bigs?  Are we missing anyone?  What do we have right/wrong? Stay tuned for part iii of our mid-season draft board extravaganza, the swingmen.