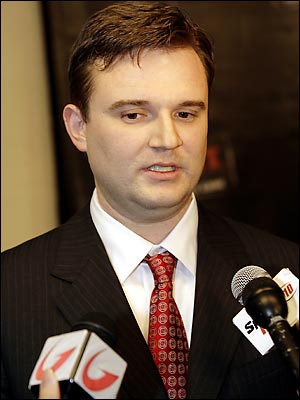 As long time readers of this site well know, we love us some stats.  We also love us some GM searching.  Today, in the New York Times, these two hobbies converged in a single article about Shane Battier, Daryl Morey, and the rising importance of statistical analysis in basketball.  Someone email this to Papa Glen immediately.

I would like to point out a few key passages in the article and how they should play in terms applicable to Our Beloved Zombies:

The games are games of odds. Like professional card counters, the modern thinkers want to play the odds as efficiently as they can; but of course to play the odds efficiently they must first know the odds. Hence the new statistics, and the quest to acquire new data, and the intense interest in measuring the impact of every little thing a player does on his team’s chances of winning. In its spirit of inquiry, this subculture inside professional basketball is no different from the subculture inside baseball or football or darts. The difference in basketball is that it happens to be the sport that is most like life.

One of the things we talk about frequently here on Hoopus is the importance of favorably ended possessions and playing to the strengths (and away from weaknesses) of individual players.  At its heart, this way of looking at the game is based on focusing on the factors that increase the likelihood of individual parts being able to affect the team in a positive manner.  Strewn out over a series of 100 possessions, what does Player X do, as a percentage of the whole, to help his team put the ball in the bucket?  What does he do to hurt his team putting the orb in the hoop? With metrics like offensive rebounds, points, eFG, free throws, and turnovers, this sort of measurement is fairly easy to grasp (even a blog can do it), but what about the cliched intangibles?

Battier’s game is a weird combination of obvious weaknesses and nearly invisible strengths. When he is on the court, his teammates get better, often a lot better, and his opponents get worse — often a lot worse. He may not grab huge numbers of rebounds, but he has an uncanny ability to improve his teammates’ rebounding. He doesn’t shoot much, but when he does, he takes only the most efficient shots. He also has a knack for getting the ball to teammates who are in a position to do the same, and he commits few turnovers. On defense, although he routinely guards the N.B.A.’s most prolific scorers, he significantly ­reduces their shooting percentages. At the same time he somehow improves the defensive efficiency of his teammates — probably, Morey surmises, by helping them out in all sorts of subtle ways.

It turns out there is no statistic that a basketball player accumulates that cannot be amassed selfishly. “We think about this deeply whenever we’re talking about contractual incentives,” he says. “We don’t want to incent a guy to do things that hurt the team” — and the amazing thing about basketball is how easy this is to do. “They all maximize what they think they’re being paid for,” he says. He laughs. “It’s a tough environment for a player now because you have a lot of teams starting to think differently. They’ve got to rethink how they’re getting paid.”

Do you think Sebastian Telfair has an incentive in his contract to shoot less than 20 three pointers during a season?  Do you think he should?   Do you think that a poor shooting point guard would find greater incentive to perform if he was measured in terms of adjusted +/- than he would in net points and shooting percentage?  Read this next passage and try not to think of Kevin Love:

He pointed out how, instead of grabbing uncertainly for a rebound, for instance, Battier would tip the ball more certainly to a teammate. Guarding a lesser rebounder, Battier would, when the ball was in the air, leave his own man and block out the other team’s best rebounder. “Watch him,” a Houston front-office analyst told me before the game. “When the shot goes up, he’ll go sit on Gasol’s knee.” (Pau Gasol often plays center for the Lakers.) On defense, it was as if Battier had set out to maximize the misery Bryant experiences shooting a basketball, without having his presence recorded in any box score. He blocked the ball when Bryant was taking it from his waist to his chin, for instance, rather than when it was far higher and Bryant was in the act of shooting.

The bottom line here is that guys like Daryl Morey are thinking of ways in which to measure (and thus utilize) the ways in which individual players increase the odds of their team ending possessions in a favorable manner.   It works the other way around as well.  You can't stop guys like Kobe Bryant from putting the ball in the bucket but you can force him to be more inefficient in doing so.

Each and every time Bassy jacks up a three pointer, it is free money for the other team.  Each and every time Al Jefferson takes a jump shot from the right wing it is free money for the other team.  Yeah, Bassy and Big Al may make a few of these shots every now and then but they are playing a losing hand against long odds.  Big Al has a .375 eFG on his jumpers.  He shoots .606 from in close.  Somehow, 51% of his shots come off of jumpers.  Bassy is a .321 three point shooter.  His only modestly effective shot is from mid range, yet 21% of his shots are from beyond the arc.  Free money for the opposition.

The Wolves currently sport a -4 point differential for every 100 possessions.  They can't afford to give away free money.   While the cat is sort of out of the bag with Big Al being done for the season, this club is in a position to narrow this margin with a solid off season and internal quality control.

For your take home assignment, here's something to ponder: Just how effective has Mike Miller been this season?  While it is, on the surface, quite frustrating to see a shooter like Miller not shoot the ball, is he or is he not playing the odds in a positive manner to help his team win ball games?  I encourage you to head on over to Dave Berri's Wages of Wins blog for his latest on the Wolves:

To see this, let’s start with how many minutes they can now give to Love.  Prior to the injury, Love was averaging about 23 minutes a game.  Even in these limited minutes, Love led all rookies (and all sophomores) in Wins Produced.  With Jefferson gone, Love’s minutes and Wins Produced will increase.  But there is a limit to how many more minutes Love can take.  In the one game without Jefferson, Love was on the court for 38 minutes. If this continues, then 465 of Jefferson’s missing minutes will go to Love (15 minutes * 31 games).  If compare Love’s performance to Jefferson’s, this shift is worth about 0.4 additional wins for Minnesota across the last 31 games.  In other words, not much difference.

When we turn to the other 675 minutes, though, we do see a difference.  Looking back at Table One we see the population of above average performers currently available to the T-Wolves includes the following players: Kevin Love and Mike Miller.

Everyone else is below average. The problem with Big Al's injury is all of the minutes Love can not fill...all 20+ per game.

Please take the time to read the NY Times article.  It is an absolute must read.