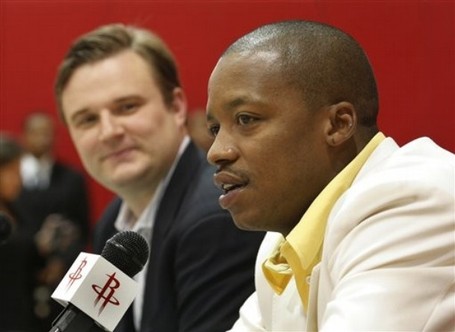 Jefferson has cleaner post moves and finishes better at the rim. But only about 60% of Jefferson's FGAs came around the rim. For Thompson, 70% of his shots have come at the rim. Close-prox shots will always be the most efficient for a big man without three-point range. Seeing more shots there with good efficiency (50% and up is good; obviously some get up to 60%, though) is a boon.

Jefferson has always used up more possessions than Thompson has this year, though. Al has always been a rock, even when he played few minutes. To be an offensive stud (which the Kings need him to be right now), Shock needs to take more shots, have his number called more frequently. And when he gets those shots, we assume a greater share might come from 15-18 feet -- it's just a reality. Look at how efficient his long jumper has been -- better than 50%. Jefferson has a murderous elbow jumper ... and Thompson's is already better (with the usual caveat regarding sample size). J.T. can pick up an extra few shots a game and likely maintain his efficiency ... even without the personal growth we all expect.

Here, here, here, and here.  As we mentioned in the previous post on the subject, Al Jefferson is a phenomenal scorer with significant room for improvement in terms of efficiency.  For instance, instead of jacking up 15 foot jumpers from the right wing, Big Al needs to pass, pass, pass.

We don't have publically accessible zone rebounding data. But we do have on-off rebounding data. So we know through box scores that Thompson is the team's best rebounder. Does he also help the team as a whole rebound better?

Yep. BV's data shows that the team's offensive rebound percentage increases from 26.1% to 29.4% when Shock is on the floor. The team's defensive rebound percentage increases from 65.2% to 69.9% with Thompson playing. Both boosts are among the league's best (#13 on defense, top 25 on offense). As this is adjusted for teammates and opponents, Mikki Moore shouldn't have much impact in these figures.

I am so fricking excited about Shock Thompson.

I am so fricking excited about the BIg Piranha.

Once the mid-range jumpers start to fall, then we'll really have something to talk about.