A break in programming

Share All sharing options for: A break in programming 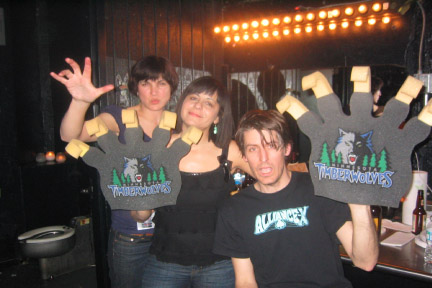 That being said, I'm in a bit of a music rut of late.  I haven't listened to a whole CD in over a month and my world famous mix CDs I make to listen to while I cook have been on hold for over 2 weeks, which is a pretty big deal for me.

Cutting to the chase, I need some music suggestions.  MAYNHOLUP turned me on to Z-Ro but that's not going to last long as I'm not all that into hip hop (but I have been converted to Z-Ro).

I am a guitar geek who grew up on Television, Wire, and Pavement.  I have a ridiculous acoustic guitar and play in a bluegrass quartet and a gospel group.  My favorite musical styles are D.I.Y. slack rock, flat picked guitar, 50's era gospel, tin pan alley, white-mans country blues, and Memphis Soul.  I have a soft spot for southern songwriters like Todd Snider, Jerry Jeff Walker, and Townes Van Zandt.  My favorite artists are the previously mentioned gents, Tom Waits, Charley Patton, Otis Redding, and the Silver Jews.  I skateboarded to hard core Cali punk in the early 90s and I took guitar lessons from the Powdermilk Biscuit Band's guitarist at Richfield's Homestead Pickin' Parlor (where I jammed every week before I moved to Kato).  I programmed at Radio K in 94 and I listen to Os Mutantes.  I believe that Bob Dylan's two greatest albums are Blood on the Tracks and Love and Theft. Mississippi is the greatest thing he ever wrote.

American Water was the greatest album of the 90s.

I own a Collings OM-2 cutaway (bought from the Podium) and an Airline H44 with an honest-to-God Savage tube amp.  I don't f#$k around with BS guitars.

Give me your recommendations.