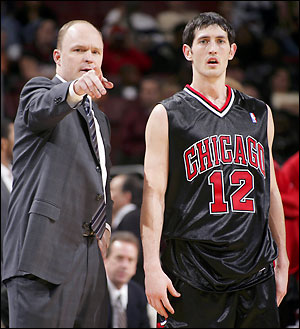 With rumors that the Wolves are interested in acquiring the services of Kirk Hinrich, I thought it would be a good idea if we took a look at what the former Kansas star brings (and doesn't bring) to the table.

First, let's take a look at the positives.  Kirk Hinrich is a 28 year old point in his 6th professional season who would allow Randy Foye to remain off the ball, where he is, at this point in time, an undoubtedly more effective player than he is on it.  During his best season (06), Hinrich avaraged 16.6 points, 6.3 assists, 3.4 rebounds, and an eFG% of .514.  Hinrich is an above average perimeter defender who can handle the ball and who has led a team into the playoffs.

Beyond this limited resume, Kirk comes with a rather large cache of negatives.  First and foremost, he is the proud owner of an albatross of a contract; four years 3 years remaining on a declining scale from $10 mil in 08/09 to $8 mil in 11/12.  That's 4 3 years and $26.5 mil for those of you playing along at home.  Should the Wolves be able to move Hinrich for Cardinal's contract (which, at this point, doesn't make much sense either) they would take a $3.25 hit in 08/09 and the full brunt of Hinrich's contract for the remaining 3 2 years.  In a year with 3-4 first round picks with a point-heavy field of players, is Hinrich worth a $33 $23 million investment?  Looking at his career arc, that answer is a resounding "no".

Outside of his career best output in 06/07, Hinrich has been a player with consistently diminishing returns.  This is especially troubling in a 28 year old well paid player with nearly 15,000 minutes played.

Hinrich is averaging 0.85 points/play while relying on the 3 ball more than he has since his rookie campaign.  If he were able to maintain his career high of 41% from long range, this wouldn't be a bad thing.  However, his current mark of .347 is more in line with his career average than his number in 06.  Since posting that high number Hinrich has put up .350 and .347 from long distance while relying more on the long ball to be modestly effective.

His PER has also seen a steady decline since his career year, currently it sits at 12.9.  Even before his high water mark of 17, he posted rather average efficiency numbers: 15.3 and 15.5.  Would these numbers be attached to a player without such a large contract, they wouldn't seem quite so bad but Hinrich is being paid to be something other than an average or replacement level player when he is not.

Hinrich currently sports a 0.7 WARP.  The good news here is that this would automatically put him in the upper tier of Wolves performers.  He is a net positive contributor who holds opponents below their averages while keeping his own offense afloat.  The bad news is that the Wolves would likely be significantly overpaying for what only amounts to average production.

$10 mil/season, even with a declining scale, is a lot of money to spend on a player whose upper level appears to be a slightly above average performer.  I'll once again go back to this year's draft crop; a grouping of players which looks to be deep at the point.  In an environment with limited resources, would the Wolves be better served to draft a Ty Lawson, Jrue Holiday, or even Nick Calathes to share the point minutes with Bassy while spending $10 mil on Samuel Dalembert or Marvin Williams or would they be better off hoping to hit the big man/swing jackpot in the draft while putting their eggs in Hinrich's basket?  Remember, Bassy is not the problem here.  The minutes that Bassy is off the ball or on the bench are.  Is Bassy a starting point?  Probably not, but the Wolves, as a team, are a net + when he's out there at the point.  Is this a problem that requires a 4-year $10 mil solution, or is that money best spent at the 4/5 or 3?

Let's take a look at two other rumors out there: Dalembert to the Wolves for Cardinal, Jason Collins, and Shaddy, and the Wizards willing to part with their 1st round pick for expiring assets.

Dalembert is owed a lot of money.  He has 3 years and roughly $36 mil 2 years and roughly $25 mil remaining on his deal.  The numbers don't decline.  However, he immediately could take 30 minutes at the 4/5 while being an above average performer with defensive credibility.  He would immediately compliment both Al Jefferson and Kevin Love while filling a need that is not contained in spades in this year's draft: an athletic big. With Tyson Chandler off the board, Dalembert remains the Wolves' best hope for this particular type of player.  Over at our excellent sister site Sactown Royalty, Ziller lays out the case for Big Sam:

Chandler's reputation is much stronger than that of Dalembert, though I can't really understand why. The only real, measurable advantages for Chandler are that he is 17 months younger, that he refuses to shoot if he can't dunk (hence the higher FG%) and he doesn't put the ball on the floor ever.

Dalembert is an equal or slightly better rebounder, a far better shot-blocker, is slightly cheaper in salary and MUCH cheaper in terms of acquisition costs. If Chandler would have cost John Salmons and an expiring contract, Dalembert has the sort of stigma that might end up with Philadelphia pay the Kings to take him away.

I'll admit that I'm not a big Dalembert fan but his resume fits the bill of what the Wolves are looking for.  The costs of acquiring him are roughly the same as bringing on Hinrich and he wouldn't hamstring a team with 4 possible first rounders from taking a point in a point-heavy draft.

The second deal is one that I think the Wolves should pursue with all hands on deck.  Should the Wiz maintain the status quo while landing the top pick, they are looking at a $26 mil price tag to keep that player.  The Wolves have expiring contracts (Shaddy, Colllins, and Calvin Booth), young cheap players (Craig Smith), and stashed 2nd round Euros without guaranteed contracts (Nikola Pekovic) that could provide the Wiz with everything they could hope to receive in such a cost-cutting measure.  Hell, it looks like the Wolves will not receive the Utah pick this year; they could even throw that in for the Wiz's unconditional first.  Even if they brought on Etan Thomas, Juan Dixon, and Mike James, they are likely not looking at a lux tax hit in 08/09.  Pekovic and the Utah pick could be pushed off into the future when Washington is not in salary cap hell and the Wolves could be left with two top 5 picks.  This option would cost significantly less than either the Dalembert or Hinrich options and it would leave the team with future cap flexibility when Thomas and James clear the books.  I don't have to remind you that having 2 top 5 picks in a 3 man draft puts your favorite team in a solid position going forward.  This option would also preserve Mike Miller and Brian Cardinal (along with James) as expiring 08/09 deals.  If there is any truth to this rumor, let's hope the Wolves are giving it serious thought.  Pekovic and a future Utah pick + expiring contracts are everything the Wiz need to avoid taking a massive cap hit next year if they are unable to move Butler or Jameson before the deadline.

Wrapping this thing up, Hinrich is an average player with a ceiling that is just above average.  He is a net positive performer who can hold down the minutes that Bassy does not take at the point while allowing Foye to remain off the ball.  If he were a $5-6 mil/year player, this would be a no-brainer type of trade.  However, if he were a $5-6 mil/year player, the Bulls probably wouldn't be thinking about trading him.  The Wolves would be much better served filling their point guard gap in the draft while using their assets to pursue Samuel Dalembert or the Wizards #1 pick.

Of course, the Bulls could make this deal more interesting by the inclusion of Ty Thomas or Joakim Noah with Mike Miller going back the other way.  But that's just a bunch of speculation.  Here's hoping for the best.

UPDATE: The Bulls just made a deal with the Kings for John Salmons and Brad Miller.  Amazingly, they were able to include Andres Nocioni in the deal.  If you look at the deal in Trade Machine, you will see that the Bulls are taking on about $8 mil in 09/10 salary.  In other words, you wouldn't expect a team like the Bulls to make this sort of move unless they had a way with which to move a player like Hinrich.  If I were a betting man, I'd say they have an agreed-to Hinrich deal on the table.  Who it is with, I don't know.

UPDATE ii: Keep an eye on who plays in tonight's Bulls/Bucks match up at 7:00 PM CST.

UPDATE iii: Thanks to a heads-up reader for telling me that Sham Sports is a bit confusing on Hinrich's contract information.  They have 2008 listed as this current season, rather than 07/08.  Hinrich has 3 years and $26.5 mil remaining on his deal according to multiple other sources.  Still...a lot of money for an average player. Dalembert has 2 years and $25 mil remaining.  I will make the changes above.