Share All sharing options for: I Love Kung Fu!!! 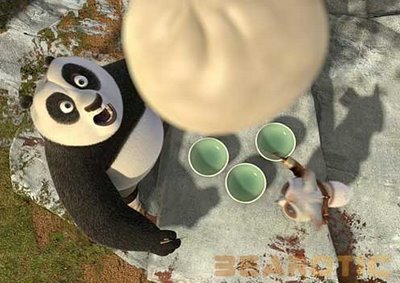 OK, was it just me or did anyone else get a kick out of a clip of a flying Kung Fu panda soaring after a tasty dim sum on the bottom right corner of the screen during each and every single Oscar presentation during last night's Academy Awards broadcast?  Prestigious Japanese drama about the fraility of life and the certainty of death? Flying panda.  Deeply moving historical drama about the first openly gay elected official?  Flying panda.  Gripping documentary of a man tightrope walking between the Twin Towers? Flying panda.  A rags-to-ritches story of destiny and love in the slums of Bombay? Flying panda.  It was almost as distracting as having a dwarf mime on a unicycle give a visual play-by-play of the Good Friday homily.  Anywho...

First things first: where in the world was Kevin Love in the 4th quarter?  Where in the world was Brian Cardinal throughout the entire game.  Not only are these two players the team's most effective frount court players, they play very, very well together.  Yes, I get that the Lakers present the Wolves with some pretty tough match ups, but Kobe Bryant on Randy Foye is every bit the physical mismatch (if not more) than Pau Gasol on Love.  I get that Love played almost the entire 3rd quarter and that at the time when he typically enters the game in the 4th the Lakers went with a Luke Walton, Derek Fisher, Gasol, Odom, Bryant lineup that is....come on, these are the same guys who started the game.  You don't leave your best player (and yes, Love is the team's best player with Big Al out of action) on the bench for the entire 4th quarter.  You don't not play your 2nd most effective front court player a single minute.  Walton or Odom would have been a tough match up for Love but he needed to be in the game.  No matter what happens on the defensive end, Love gives this team two very important things that they absolutely need near the end of games: rebounding and free throws.  Last night the Wolves went 7-9 from the line in the 3rd quarter.  Love provided 5-6 of that total.  They went 2-2 from the charity stripe in the 4th with Love on the bench.  They also didn't collect a single offensive rebound in the final quarter while allowing the Lakers to go for game highs in both offensive (3) and total (11) rebounds.  News flash to the Wolves: he may give up some size and easy shots but he balances out his shortcomings in ways that Jason Collins, Mark Madsen, and everyone else on the squad cannot.

Speaking of Love and Odom, the Lakers did something very interesting last night with Love on the boards.  During the 3rd quarter when Love started to get on a rebounding roll, Odom would run at Love's back when a shot went up.  At times, Love would be sandwiched between 2-3 Lakers on the glass.  Unfortunately, Love's team mates did nothing to adjust for the best team in the league targeting a specific player's considerable rebounding talents.  Odom also seemed to have it out for Love throughout the night; going after him more aggressively than any player I can remember since the night after Christmas turnaround...which brings me to my next point:

Long time readers of this site know that we don't do that much bitching about the refs.  The Wolves are not that good of a team so there is no point in complaining about them getting the short end of the stick; they lose games the old fashioned way: by sucking.  Last night, however, was different.  I won't go as far to say that the Wolves lost because of the refs (the apathetic Lakers probably would have turned it on in the 3rd if they needed to), but...well, last night's tilt should be Exhibit A in any critique of NBA officiating.  From non calls (Kobe running over Jason Collins near the end of the game, Kobe charging into Love for a layup, Odom giving Love a forearm to get a steal, Ryan Gomes getting fouled on a made 3, etc) to bad calls (too many to count) to make up calls (of which I counted at least 3), the refs were an absolute embarassment and noticeably distracted from the quality of the game.  The biggest on-court elephant in the NBA room is terrible officiating.  It's brutal.  Sadly, it took the Wolves getting rid of KG to make me realize just how badly teams without superstars get treated.  It's absolute garbage.

Wrapping this thing up, the Wolves have now gone over 17 turnovers/game for the past three tilts.  This was to be expected with them having to become even more up tempo and reliant on perimeter players for success.  What is somewhat frustrating about the uptick is that a large chunk of them are not born out of aggressiveness, but rather by lazy passes, over passing, and general bone-headed play.  The next time Mike Miller passes out to Bassy beyond the arc with less than 5 seconds on the shot clock he should be fined $1,000.  The next time Foye arcs a slow chest pass across the perimeter only to have it tipped or for it to give his recipient's defender ample time to recover, he should be given a wet willy by McHale.  This team cannot be having the types of concentration lapses it has been having of late and get away with it.  Their possession-based room for error isn't big enough to absorb this type of play.

All of that being said, it was a fun game to watch...despite the frustrating rotation decisions, an apathetic approach by the Lakers, terrible reffing, and frustrating on-the-ball skills by non-Bassy Wolves, the game came down to the wire; the final 5 minutes being played from scratch and both teams trading huge buckets under pressure with time ticking off the clock.  It really was a lot of fun to watch...despite all of the nonsense.