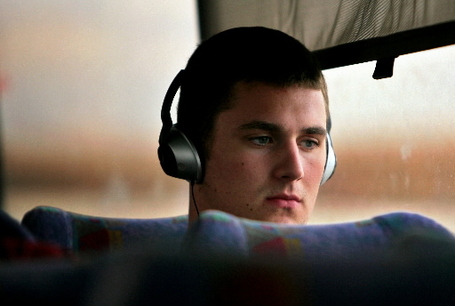 First of all, it was a busy day in Wolves and former-Wolves-dom.   Marko secretly ties the knot, Starbury gets released, Hoopus becomes part of Yahoo...

Let's cut right to the chase: last night's tilt was the second game in a row where the Wolves top pick (and best player with Al Jefferson sidelined for the rest of the season) was benched for the entire fourth quarter.  For the second straight night, the team's biggest rebounding and foul shooting threat (to say nothing of the cliched "little things" that we go on and on about with the Big Piranha) found himself firmly planted on the pine in a close, winnable game.

Love started out the night on fire; gathering 11 points (3-3 from the line), 2 boards, and 2 assists in the first quarter.  He was yanked when Joey Graham subbed in for Chris Bosh with just under 4 minutes remaining in the quarter.  The Wolves were +10 when the switch happened.

Look, I get that Love can't play the entire game.  I get that teams are starting to run out hybrid forwards in place of centers and straight up 4s to jack up the Wolves' rotations, but when your best player is off to that type of start, and when your team just responded to a 5-0 Toronto run with a 6-0 run of their own, you let the big fella finish out the quarter.  I don't care if the Raptors sub in a 6-nothing guard for Chris Bosh, you make your lineup work around the guy who is driving the action.  Figure. Something. Out.

In the second quarter, Love re-entered the game alongside of a player that is the oil to his water, Craig Smith.  How much larger of a sample size do we need to see to know that these two players just do not mix?  Alongside of The Artist Formerly Known As The Rhino, Love took zero shots and gathered a single rebound.  The team was -12 with this obviously mismatched pair on the court.  Love and Brian Cardinal are the best frontcourt pairing this team can put on the court from here on out; Love and Smith is the worst.  How hard is it to make sure that oil and water don't mix for 48 minutes a night ?

Changing gears, last night's game marked the first time in quite a while where I've had serious second thoughts about Kevin McHale remaining on the bench for next season.  It was at the beginning of the 2nd quarter; Smith, Cardinal, Bobby Brown, Kevin Ollie, and Rodney Carney were on the court for my favorite team.  Let me repeat that: last night, the Wolves put out a 5 man rotation of Craig Smith, Bobby Brown, Brian Cardinal, Kevin Ollie, and Rodney Carney.  Really?  It was at this precise moment where I was jolted into a flashback of the pre-Christmas days of Randy Wittman and Rashad McCants.  "Holy balls," I said to myself.  "This team is almost completely void of talent."  How did this happen?

With each passing quarter after the Big Al injury, it is becoming more and more obvious that this team has 2 starting level talents: Al and Love.  You can make a good case for Randy Foye being the 3rd member of this group but this all depends on the makeup of the remainder of the roster.  Say what you will about the team's undersized frontline, but Foye has more than his share of troubles with guards over 6'4".  Everyone else is replacement-level or lower.  His success is completely dependent on who else is out there with him.

Long time readers of this site know that I am a huge proponent of small ball.  I don't care about having specific sizes and skill sets at the 1, 2, 3, 4, and 5.  That being said, I do care about balance and proficiency.   Good small ball teams need to have some form of positional flexibility and...wait for it...talent.  I get that the team is still less than two years removed from the KG trade.  This is a rebuilding process and I'd be lying to you if I said that I didn't think the front office has made a series of solid moves that have put this team back on the right track.  However, when the Wolves ran out the Brown, Smith, Cardinal, Ollie, Carney quintet I found it very easy to change the channel.

I guess what I'm trying to say here is that I still find it incredibly hard to swallow the fact that McHale walked away from the mess he created while Wittman was fired.  I know the team probably couldn't find a better coach right now.  I know that the team probably wouldn't respond better to an outside voice at this particular moment.  However, a new set of outsider eyes is what this team has always needed and they will never get it with McHale being located anywhere near the vicinity of 600 First Avenue.  This squad is about to enter the most important offseason in the history of the franchise.  It is the fulcrum upon which the team will rise or fall.  While I guess it is something of a positive that I don't have the feeling that this team will 100% EPIC FAIL with their considerable assets, I also do not have the sense that it will work out for the best.  The #1 reason for this feeling is that Kevin McHale is still there.  I think fans deserve to know that he will in no way, shape, or form have any decision, impact, or influence on what happens in the offseason.  Following the end of the season, the team should send him on a summer-long outdoors excursion up north and let Jim Stack, Fred Hoiberg, and Rob Babcock do the work without him.  I still think the team needs a set of outside eyes but, practically speaking, this is the best we can hope for.

BTW: Don't forget to sign up for Hoopus Night at the Target Center on April 11th.  Here are the details:

We hope to see you there.