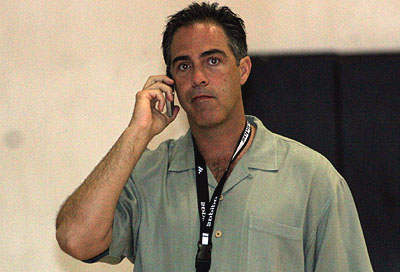 Ooooh look, he's on the phone!!! Who do you think he's Pritch slapping?  Isn't it exciting?

Yes folks, it's time once again to play one of our least favorite teams in the league, the Portland Trail Blazers.  From Randy Foye + $1,000,000 of Paul Allen's money to a coin flip for Greg Oden to an abnormal and creepy fan-based man love for team GM Kevin Pritchard to the unprofessional (if not illegal) leaking of confidential medical information of a player to the press to bad mouthing former players to opposing GMs to their own fans booing Darius Miles because his comeback from a medical disaster messed up their cap space...well, let's just say that the Lakers are the only other team I enjoy less, and I have to admit that Kobe is growing on me.

Despite of all of that, the Blazers sport one of the best team-based basketball blogs in all of blogdom and it should be a daily read if you follow the NBA.  Even though I hate the product, I understand that they do a fantastic job and they are a wonderful example of what good blogging can do to enhance the coverage of a professional basketball team.  They are one of the models for this site and we are greatly indebted to them for that.

Since we here in Wolves-land have seen the loss of nearly 75 game minutes from expected major contributors (Al Jefferson, Corey Brewer, and Rashad McCants) you know what the keys-to-the-game drill is: quick ball movement, a low number of 3s from Bassy, continued rebounding dominance from Kevin Love, Love continuing to improve his finishing around the rim, Mike Miller being more assertive with his shot, and Ryan Gomes continuing to be aggressive with the ball.  We don't want to see kick outs to Bassy beyond the arc with less than 5 seconds left on the shot clock.  We want to see a packed-in defense that does as much as possible to prohibit penetration and inside proficiency.  Make them go over the top.  Yes, I get that they shoot and make a lot of threes but penetration, free throws, and their size are much more dangerous than the long ball.

Another thing that we will be looking for is whether or not Kevin McHale will improve on some of his questionable rotations from the past few games.  We don't need to remind anyone that their best player (Mr. Love) sat out the 4th quarter in 2 of the last 3 games?  Why?  We have no clue.  Also, this is not a favorable match up for Craig Smith.  He should see limited action and very little time alongside Mr. Love.

I would like to take exception to something that Dave wrote over at the excellent Blazer's Edge:

Neither can the ‘Wolves claim a sterling offense.  They shoot a lot of shots early in the clock by design, trying to push the tempo.  The problem is they miss most of them.  They're not good three-point shooters and they don't draw enough fouls given their style of play and the number of shots they attempt.  They don't pass the ball or set up good looks.  They're the worst team in the league getting their shots blocked, due in part to the quality of attempt and their lack of adeptness at moving the defense but also to their lack of size at multiple positions.

I don't want to say this is completely inaccurate, but it's close.  The Wolves do indeed push the tempo but it's not your typical run-and-gun style of fast-paced ball.  Between Love and Bassy, the Wovles get the ball into the 1/2 court much quicker than most teams but they still run a lot of motion-based/weave offense with Big Al being out.  This is by no means 7SOL or run-and-gun.  If anything, we Wolves fans are conditioned to see over-passing and too much ball movement. I encourage Blazers fans to count the number of times Mike Miller, Ryan Gomes or Kevin Love will pass up an open shot in favor of a pass during tonight's game.

The Wolves also have been drawing a surprising number of fouls since Big Al went down.  Since the All Star break they have averaged 27.8 FTA/game.  In their last 5 contests, they have went for 28, 19, 19, 41, and 29.  The majority of these FTAs are set up in one of two ways: offensive rebounding and dribble penetration.  While most fans around the league still view Bassy as being the player he was with the Blazers and Celtics, and while he does shoot from outside a little too much, he can and will get in the lane tonight, no matter how far the defense plays off of him.

Despite being down 3 major contributors (granted, one of these was a self-inflicted wound), and despite the team rapidly approaching the dog days of the NBA season, the Wolves are still playing exciting, hard-fought ball in close games. They are developing young players like Love, Foye, and Bassy and they are refining the games of future glue guys like Miller and Gomes.  With the possibility of four first round draft picks, a stashed Euro center with promise, future cap space, and three valuable expiring 09/10 contracts, not all is bad in Wolves-dom.  Plus, they haven't threatened to sue anybody.  That has to count for something.