Making Roy out of nothing

Share All sharing options for: Making Roy out of nothing 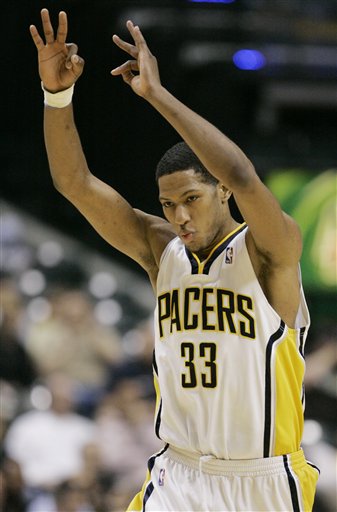 I was unable to watch most of the game last night because all the treadmills at the gym were in use by non basketball fans, so I'm going to open this one up to the comments section for a game wrap, but before I do I'd just like to make a few comments about Danny Granger.

From taking a no-name high schooler over the ACC Player of the Year to trading away one of the best young stars in the game for Randy Foye and a million bucks, Wolves fans have many, many reasons to be upset at the way in which the Wolves have spent their draft picks in recent years.  Danny Granger is not one of those reasons.

I can see where people might be upset.  Granger is a fantastic young scorer who can really put the ball in the bucket.  The player the Wolves chose in place of him, Rashad McCants, sits at the end of the bench, apparently without a clue in the world of how he got there.

However, let's go back in time to the 2005 Draft.  Shaddy was one of the top 3 players on one of the best college teams in recent memory and Granger was playing in New Mexico.  Let's take a look at some key stats:

Now, to be perfectly honest, were we running the numbers on these two players today, Granger would come out ahead of McCants, but not by the wide margins that 20/20 hindsight would suggest, or that existed a year later between Brandon Roy and Foye:

As you can see, the gap between McCants (a primary player on the best team in the land) and Granger (the best player on New Mexico) is there but it is small and places them both in the second tier of that year's draft.  The gap between Roy and Foye (both primary options on similar teams) is massive.  Across the board, Roy showed, at the time, that he was worth far more than the million bucks and the player the Wolves got in return.  This isn't a strike against Foye.  He is turning into a fantastic player but he's no Brandon Roy, nor was he at the time.  It could, however, be argued that McCants was indeed in Danny Granger's class when he came out of college.

Of course, this ignores the reports that Kevin McHale did not interview McCants' college coach and that the team did not perform its due diligence in its behind-the-scenes front office duties, but as far as on-the-court performance in real time is concerned, passing on Granger in favor of McCants was not a terrible mistake.  Even if you take into consideration the off-the-court issues, the gap between McCants and Granger was no worse than the ones between Shaddy and Nate Robinson, Luther Head, Francisco Garcia, Hakim Warrick, Jason Maxiel, Linus Kleiza and David Lee; players that were selected after the North Carolina malcontent.

Granger is a somewhat productive player.  He can score very, very, very well.  Shaddy does nothing.  This has nothing to do with the fact that, at the time, the Shaddy/Granger decision wasn't all that we now make it up to be.

Anywho, what say you about last night's game?  Danny Granger?

Finally, read all about the game from the Pacer perspective at our sister site, Indy Cornrows.