Mid-season draft board, pt. i: grading the guards

Share All sharing options for: Mid-season draft board, pt. i: grading the guards 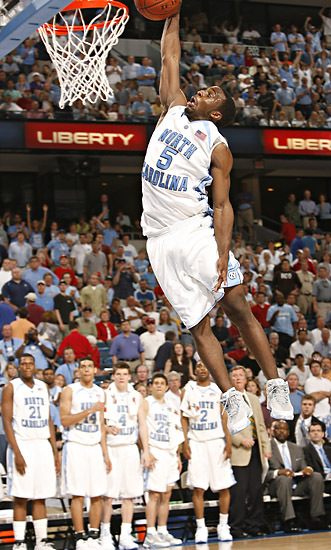 It's that time of year again.  Time to start plugging the college stats in to our handy-dandy excel spread sheet to see which players are performing at draft-worthy levels.  Last year I simply offered up one big generic draft board instead of breaking it down by position.  This year, I will be breaking things down by guards, swingmen, and bigs.  I'll list each separately and then give you a master list after we have gone through all three tiers.

The formula I am using for grading these players is pretty simple; I take 13 key indicators of basketball success, add and subtract them together, and divide by the number of games played.  The formula is a work in progress but it is based on Dave Berri's Win Score.  I use his weights for blocks, assists and personal fouls.  In addition to his metrics, I use OReb%, %Poss, eFG%, FTRate, and estimated PL.   With no further delay, here are the 14 guards I measured with their Hoopus Score:

Just to give you an idea of how much of a one-man draft this year's affair is, Blake Griffin scored a 26.822.  His dominance knows no equal in college ball.  Actually, that's not completely true.  He may only be the 2nd most dominant baller on campus.

I think you can break this year's guards down into three distinct categories: Lawson, Harden and Curry; Teague, Calathes, Cummard and Maynor; and the rest of the bunch.

If the Wolves find themselves in a position to take one of the top tier guards with their top pick (likely in the 7-10 range) and guys like Evan Turner (18.32), Cole Aldrich (21.319) and Jordan Hill (19.638) are not on the board, and they pass on one of these three, there had better be a good reason for it.  2nd tier players like Teague and Calathes could be available with the Heat pick (not likely with Teague) but they would be a fairly significant step down from what the Wolves need: a guy who can split the point with Bassy or take some weight off Randy Foye.

The way things stand right now, I think the a-plus, numero uno, super-duper, geeked out scenario for OBZs is that Stephen Curry is on the board when David Stern announces that Minnesota is on the clock with the 7th, 8th, 9th, or 10th pick in the draft.  Curry is a guard who can be the guy with the ball in his hands; initiating the offense, bringing the rock up under pressure, and so on and so forth.  His size is a bit of a concern and the game against Purdue showed that he can be neutralized if the opposing team throws everything it has at him, but in the NBA he will not be an A1 option; he will be a guy who handles the ball, runs the offense and, hopefully, gets a lot of open looks from beyond the arc.  If Bassy/Foye is a working back court model (it's not the best; I get that), then I'm not really sure how Curry could scare anyone away with his size + shooting ability.  Given the Wolves' likely drafting position, and the way they are playing of late, I think Curry has to be considered the goal of the draft.  (BTW: If the Wolves don't land Stephen, perhaps they can wait around a few years for Seth ;) )

Lawson offers Wolves fans an interesting option should he be on the board when the 1st pick comes around.  On one hand there is some pretty solid statistical evidence to suggest that he's the best guard in college ball.  Forget Harden for a second; Lawson runs a precision offense on one of the best teams in college ball.  He has done so for 3 years now, improving with every campaign.  He is solid with the ball and he excels in transition.  His eFG% is something that most fans would give their left arm for to see in Bassy.  He is strong and athletic and possesses world class basketball quickness...all the while maintaining the 3rd best OE in college ball.  On the other hand, he's short and only 2 years younger than Bassy.  His numbers suggest that he could function as a sort of Super Bassy; stronger, faster, better shooting, superior facilitating numbers, etc.  However, do the Wolves use their first pick on the same type of player as Bassy and hope that he develops into our theoretical Super Bassy, or do they attempt to find someone with a bit different game?

Out of the rest of the bunch, I have to say that I am a big Nick Calathes fan and I have no idea why he's not getting more attention.  Let's say that the Wolves luck into either a top 3 pick or someone like Evan Turner between 7-10.  Nick Calathes is exactly the type of guy you want to see with one of the later picks.  From his size to his passing to his rebounding to damn near everything else, he would be a nice compliment to Foye.

For some reason that I can't explain with stats or rational argument, Jeff Teague scares the bejeezus out of me and I hope the Wolves don't land him.

I was fairly surprised to see how poorly Jrue Holiday performed in our little formula.  I'm hoping to see more of him as the year goes on.  I've seen 3-4 of his games and he just looks like a good baller.  His stats, on the other hand, leave much to be desired.  Here's hoping it's just the UCLA offense keeping him in check.

Let's take a look at some key stats of the top 7 players in this grouping:

A few things of note.  First, I always like to compare the ratio of ORtg to %poss.  It's one thing for a guy on a good team to put up huge ORtg numbers (see Lawson, Ty) but not factor in a huge number of possessions; it's quite another for someone to carry a superior ORtg while doing a ton on the offensive end of the court (see Curry, Stephen).  Second, another ratio I like to look at is the relationship between FTRate and 3%/2%.  If guys aren't getting to the line, how are they scoring?  Do they rely too much on the short college 3?  Are they able to maintain a mid-range game?  What about the opposite scenario?  If a player relies on getting to the line, how does he fare from long distance?  Does he make mid-range shots?  A few other points of interest:

Finally, I'm still tinkering with this formula so it will likely change by the end of the year.  Ideally, I'd like to have everything on a 20 point scale.  Whatever happens with it, at the end of the year I'll run the same formula on everyone and then compare it to last year's draft picks so that you can have a bit of context to what we're measuring here.  Stay tuned for parts ii (bigs)  and iii (swingmen and wrap up).