This one's for Khloe

Share All sharing options for: This one's for Khloe 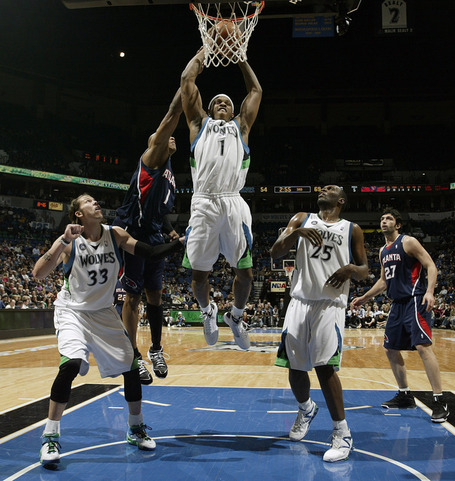 Before I go any further, let me just take a quick moment to say that one of the worst things about the NBA is that its season is about 20-30 games too long.

Last night, a Wednesday in early February, not only did the Wolves play the back end of an away/home B2B, but they played their 5th game in a span of a single week. During that stretch Randy Foye has averaged 40.4 mpg with .352/.296 shooting; Ryan Gomes went 37.0 mpg with .381/.258 shooting; and Bassy, on an injured leg, went for 29.4 mpg with .347/.167. Yes, I get that they’re professional athletes and that this is what they get paid to do. I also get that all teams go through touch patches of the schedule while dealing with shortened rosters and injures. I get that. What I also get is that this makes for some pretty terrible ball, as the last 2 games were not exactly pristine examples of what makes for good hoops.

Last night’s tilt was one of those games where you really can’t draw a lot of conclusions other than that the Wolves--while playing awful, sloppy ball—were only down by 2 points with less than 5 minutes to play. Somehow, throughout all the terrible shooting, tired legs and half-assed passes, they were right there down the stretch until Mike Bibby buried them with a three. Actually, I know exactly how the Wolves were able to stay in the game: rebounding, rebounding, rebounding. The Wolves hit the offensive glass to such an extent that they had 22 more shots than Atlanta. They shot so poorly from the field that they had 1 less make. Also, offensive boards do not tell the whole story. As anyone who has played 5, 10, or 15 minutes of ball can tell you, the first thing that you do when you are tired on defense is….wait for it…use your hands to make up for the distances your feet will not travel. The Wolves committed 25 fouls last night, sending the Hawks to the line 38 times and giving up 11 points at the charity stripe. Despite all of the free throws; despite getting outshot .500 to .364; the Wolves were in this at the end and could have walked away with a win.

Looking deeper at the game from the Hawks’ perspective, they won last night because of Marvin Williams (a 3) and Mike Bibby (a 1). Against Minny’s exhausted perimeter trio Williams and Bibby went to town and were able to highlight the existing (and already considerable) talent gap between them and the hometown heroes. I know this gets a bit repetitive when I say it game after game after game after game after game, but the Wolves are severely outmanned at the small forward and point. Severely. Bassy is my favorite player on this team but he needs help. Ryan Gomes is a fantastic player and character guy but he’s a sub. If anything, outside of sticking around in a game that would have likely been a 30 point blowout in the Days of Witt, last night’s game highlighted the need of a talent upgrade just as much as the loss against the Lakers. Bassy, Gomes and Craig Smith are not starters. Randy Foye can’t continue to perform while putting up 40+ mpg. Kevin Love is a rookie and isn’t going to go too far over 30 mpg. Mike Miller is best served coming off the bench in a role that has led to his resurgence (in case you haven’t noticed, he’s playing his best ball of the season off the bench). Rashad McCants…

Yes, Shaddy made it into game action last night and played more minutes in a single game than he had in the past 15 contests. I’ve made my thoughts about Shaddy known on this blog for quite some time. I think that he is a combo guard talent above and beyond Randy Foye and if he could have wrapped his head around the concept of team play, the starting 2 would have been his. Seeing that he missed the big opportunity for the starting spot, his next big option was to be a super sub; a guy who could come off the bench and provide instant offense. Somehow, I doubt this will be the case (highlights are mine):

Q: So what are you doing each day to make sure you're ready when your number's called?

RM: Basically all the guys that play, all our guards play. So there's not much time for me to play one on one or two on two with those guys. They play big minutes. Basically, I run down my own arm shooting progression, workout, and one on one workout with the coaches where I just kind of tighten up on my ball skills, my offensive skills, and try to stay ready. I'm always shooting, 500 to 600 shots a day, making sure that my defense and lateral quickness is good. I would definitely say that early on I struggled with my three-point shot. Just because I was out of rhythm, I didn't really get a good rhythm or a good pace in the game. I was playing about 16-17 minutes, so it's hard to get a pace going in and out of the game like that. But I think now that I have the ability to really focus on my shot -- my three-point point shot, my mid-range shot, my post-ups -- I think my explosiveness, to grab lobs, ball handling, the whole package, pretty much everything that you can have as a player, I've been tightening up on and making sure that when the time comes, I'll be ready to do whatever they ask me."

Q: I think that pretty much wraps it up for now. Is there anything else you want to add before we close it down?

RM: I definitely think that I'm deserving of trying to be the All-Star type player that I can be. I definitely need all the fan support as possible.

He does not, has not and likely will never get it. His future in the league, at this point, is a 15-20 mpg kind of guy off the bench.  Until he proves he can wrap his head around that, no one will give him the minutes he thinks he deserves.

Finally, last night’s game was the worst performance against a zone since the dreaded New Jersey game. When presented with a zone, don’t dribble so damn much!!! Pass and attack the middle.

That is all. Until later.

PS: Can the Wolves please make a trade for Marvin Williams?  Please. More to come on that subject.