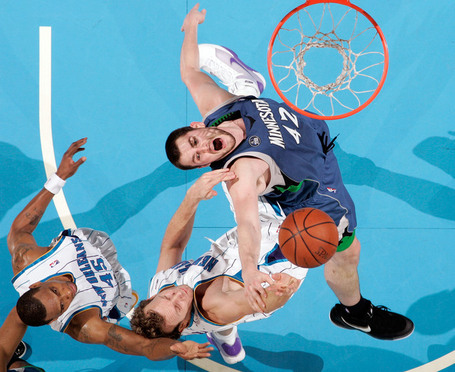 Let's forget about the internals of the past two games for a moment.  The Wolves lost 2 in a row way down south to two teams that were either athletically inferior (Houston--their announcers were flabbergasted that the Rockets looked so slow next to the Wolves) or decimated (NOLA).  How they did so was less important in terms of x's and o's as it is with personnel decisions and talent.

Because he's in his 3rd year of play, it's sometimes hard to remember just how little Randy has actually played in this league:

In 2-3 games he should have career highs in minutes played, FGA, FG, and just about every net metric you can get your hands on.  With Corey Brewer and Kevin Ollie down and out, and with Rashad McCants in the doghouse and Rodney Carney strangely down the bench, the Wolves' back court rotation--who are, with the exception of Foye, bench players--is being run into the ground.  And, as hinted at above, the minutes Foye is putting up are especially troubling.  Britt puts it nicely here:

People talk about the rookie wall, but Foye is entering unprecedented territory in terms of his own workload. He's already started more games than in the previous two years of his pro career combined, and, if his current minutes-per-game pace holds, will set a career high for court time in Minnesota's second game back from the all star break. As it is, he's already logged 1803 minutes this year, versus 1879 his rookie season and 1259 in his injury-truncated sophomore campaign. That time has taken its toll. Foye sank at least half his shot attempts in 11 of the 15 games from December 20 to January 13--and not once in the ten games since then. In those 15 games when he was burning up the twine, Foye eclipsed the 40-minute mark just 4 times and logged less than 34 minutes 6 times. In the ten games that he's been too pooped to pop since then, he's logged at least 40 minutes in seven of them, and never less than Sunday's 34:45.

The guy is gassed.  I know the All Star break is 1 game away, but what happens down the stretch if the status quo remains?  More importantly, what impact does the lack of personnel in the back court have on the possibility of moving Mike Miller and Rashad McCants before the trade deadline?  Some of these questions may be a bit easier to answer after the team receives the results of Al Jefferson's MRI test later on today or tomorrow.

This is shaping up to be one of the most disappointing aspects of the remainder of the season.  How do you gauge team play in such a setting?  How can you get a sense of the direction in which this team is headed if Jefferson joins Brewer on the bench and Foye is pushed back on the ball for significant portions of each game?  Perhaps this is a silly question.  After all, how much more do we need to see to know that this team needs an upgrade at the 1, 3, and backup 4/5?  Draft a point and a 3rd big and move what you can/sign a real 3.

Let's go back to the Miller thing for a second.  Miller is playing his best ball of the season.  Together with Shaddy's contract, the Wolves can package $11.6 million of decent perimeter player contracts.  They can actually go up to 125% + 100k to this number.  How about a sign and trade with Atlanta for Marvin Williams (Miller, Shaddy, + Utah pick for Williams at $10 mil/year)? Let's get creative. It is rumored that NOLA is about broke.  How about offering them Nikola Pekovic, Rashad McCants, Jason Collins, Calvin Booth, and the Utah pick for Tyson Chandler? That's 3 expiring deals, 1 young Euro big and a draft pick for a player they may not be able to afford.  You get the picture.  (UPDATE: McCleak beat me to the punch in the FanPosts.) The big question here is whether or not their sudden depth problems will deter them from making solid long term decisions.  If Al Jefferson is going to miss an extended amount of time, will the Wolves close ranks and roll with what they have or will they be prodded to move what they can in what will likely end up being, in terms of wins, a lost 30 games to close out the season?

Whatever it is, here's hoping that Al's injury is just a scratch and that he'll be out there as soon as possible.