Dear Mike: 15 shots/game or the kitten gets it

Share All sharing options for: Dear Mike: 15 shots/game or the kitten gets it 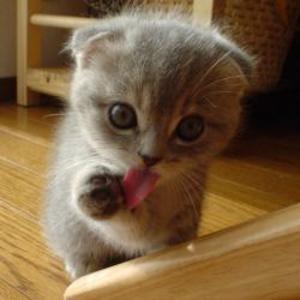 Mike, it's called blackmail.  It was invented a long time ago.  Perhaps you've heard of it.  With Randy Foye out for what will probably be a decent little stretch of games, it is time for you to give up your Magic Johnson Dreams and...actually, with Foye on the bench with a nasty ankle roll, these next few games may offer an interesting glimpse as to what can happen when a large off guard lines up next to Sebastian Telfair in the starting lineup.  Granted, the team is now more than decimated by injury and measuring this little look into a possible future will be something of a hard task, but if the team rolls out a Bassy, Miller, Ryan Gomes, Kevin Love, Jason Collins starting lineup against Memphis tomorrow night, you might just be able to squint your eyes enough to make-believe that this particular style of lineup could...well, I'm stretching here.  I apologize.

Speaking of Memphis, with a loss against the Griz on Wednesday night the Wolves would only be 1 game ahead of their 1-40 friends (Memphis and OKC) in the win column.  With last night's loss against the Wiz, they are now only 3 games north of the former Bullets in their number of wins.  Even Sacramento won this week; putting up a surprising victory against the Denver Nuggets with Kevin Martin and Francisco Garcia leading the way.  Look at what the NBA has me doing: measuring how my favorite team could end up at the bottom of the barrel.  Earlier on this year (and later...who am I kidding?) we spent time talking about which expiring contracts could be of use to our favorite squad.

Last night also marked an occasion where (once again) the worthless League Pass Broadband blacked out the Timberwolves.  On most nights, I am able to find a pirated stream to watch the game.  Unfortunately, against the bottom-dwelling Wiz, no one in Turkey wanted to put the game up on line.  Last night was also the first time this year that I didn't really care that the Wolves game wasn't on.  I turned on the radio broadcast and used LPB to watch D-Wade play the game of the year against the Bulls

Vinny Del Negro, the game is tied and you have Ben Gordon and Derrick Rose on your team...who do you run an isolation play for?  John Salmons!!!  It's too bad such a good game had to have such a bad coach make such a big impact.

Anywho, if you have anything that you feel deserves mention about last night's Wolves game, please put it in the comments.  Were you as baffled as I was that half of Bassy's shots were 3 pointers?  Do you continue to be amazed at just how thin the Wolves are right now? Do you wonder when the team will simply up and quit for an entire game, a'la the GSW loss?

Wrapping this little ditty up, I'd like to give some free advice to Papa Glen.  Let's start by asking a simple question: What are the two biggest lessons we learned from 8 years of the Bush administration?  First, competency matters.  Second, no matter how you try to fancy things up, if there is a large enough gap between the reality you think you are creating and the reality people see and feel, eventually folks will notice.  Realllly notice. That well eventually runs dry.  This is the primary reason most reasonable people chuckle when they hear Mitch McConnell or John Boehner talk about the need for fiscal responsibility and not burdening our children (and grandchildren) with debt.  It is also the primary reason most reasonable Wolves fans get a sick feeling in their stomach when they hear that Kevin McHale will once again be allowed to choose his own destiny in the off season.  It's the primary reason why most reasonable Wolves fans don't get all that excited when they hear the front office talk about how Nikola Pekovic will be the greatest center in team history.  Did we really just hear the owner of the Minnesota Timberwolves float the idea of building around Mike Miller?

Papa Glen, you saved this team from heading on down the river to NOLA.  You pumped an obscene amount of money into this squad when it looked like it had a chance to win big.  I live in your home town and your charity and good business sense are visible from the North Mankato Taylor Library to the entire MSU campus to the Taylor Family Pool where my daughters take their swimming lessons.  I mean what I am about to say in the nicest possible way: you are fundamentally flawed when it comes to basketball operations.

I don't know why this is.  Perhaps it is a sense of loyalty to your employees.  Perhaps a more cynical view could be taken along the lines of this being a case of where a true meritocracy (on-court performance) meets a faux one (business lessons from the Market) and the end result shows that corporate acumen really is dependent more on greasing the wheels and luck than one would like to pretend.  Maybe you simply can't see the forest through the trees with the game you love.  I don't know.

What I do know is that you need to stop talking.  Your media folks should be telling you this.  Your basketball operations folks should be telling you this.  We fans (and writers) value your openness and candidness but it's time for you to simply shut up about the team.  If you do talk, you don't have to lie; you simply need to be more focused and discerning.  Do you know that during last night's game we fans had to listen to a commercial with you going on and on about how the team doesn't quit..while we were listening to your team get torn apart against one of the 2 worst teams in the league?  This isn't exactly an outlier.  Do you remember how the team folded against the Warriors immediately after you announced the fantastic season ticket deal?  We get that there are injuries.  We get that this team had a single nice month in January.  We also get that Kevin McHale put this team together.  We also get that the product is increasingly hard to watch.  We also get that the same group of guys who have steered this thing into the ditch are the same group of guys telling us to hop back in the passenger seat.  (BTW: As far as ticket prices go, a cheaper ride into the ditch is still a ride into the ditch.)  All of us long-suffering fans are well prepared for the moment this team crosses some very modest barrier of quasi-success; we know it will happen because the front office won't be able to put up the Mission Accomplished banner quickly enough.

I get that it's unfair of me to compare you guys to the single worst presidency of the modern era (maybe of all time).  However, there is a growing disconnect between what fans see with their own lying eyes and the bill of goods that is being sold to them by the people they want to believe in.  There is the always present question of a general lack of competency.  You need to try something different.  Sí usted puede.  Get yourself a new Basketball Ops VP.  Give fans an up or down on McHale immediately after the season ends.  If you want to let him ride off into the sunset, fine, but you need to let us know that the decision is yours...that there is some form of accountability that has a longer view than a single month of good ball against bad competition.  Does this mean he shouldn't be coach next year?  Not at all.  But that choice is yours.  The buck stops with you.  It stops with you to say "This isn't working and we need to bring in a fresh set of eyes."  You get the picture.

Anywho, I've said my piece and I'll now go back to cheering for the team to get a lot of lottery balls while figuring out which 09/10 expiring contracts might be able to bring back a decent player or two.  Although, if what you say is true, I will have to scratch cornerstone Mike Miller off my list of valuable expirings.