A steak is a steak, right?

Share All sharing options for: A steak is a steak, right? 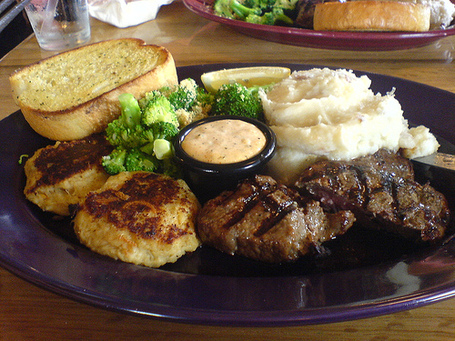 Look at it.  No matter what your favorite food is you have to admit that a good tasty steak is right up there in the list of foods that make up the ultimate meal.  Despite our northern settings, we Minnesotans are no strangers to good steaks. As a self-admitted foodie, there is nothing I enjoy cooking more than a nice porterhouse or onglet steak.  It's good stuff and no matter how much I like to cook Korean (which has excellent beef dishes) or Indian (not so much), steak will always be my favorite food to prepare...preferably as medium-rare as possible.

In the NBA, I suppose you could say that each and every win qualifies as a tasty steak dinner, especially for a team with as few wins as the Timberwolves.  However, as is the case with the culinary world, NBA steaks must ultimately be viewed in terms of quality and value.  Against Memphis, the Wolves gave their fans an Applebee's special.  Yes, it was steak, but Lordy, you were forced to enjoy it with an abundance of flare and junk on the wall.

Last night the Memphis Grizzlies ostensibly showed up at the Target Center to play a game of basketball.  Tickets were sold, popcorn was consumed, and professional players shot a little orange ball at the rim.  However, as far as overall satisfaction is concerned, it was a flat, empty meal and I kept waiting for a crew of overly-excited 20-somethings to come out and sing happy birthday to a family waiting for their free sundae.

What was it that the Griz served up on a cold March night in Minny?  Perhaps it wasn't even beef.  It seemed more like a serving of dog, as that's what Memphis played like for 48 minutes of "action" against Our Beloved Puppies Zombies.

Ultimately, after 10 straight loses, I'm happy that the Wolves were able to pull one out and play well.  However, my general feeling about the game is one of...well, steak is still steak no matter if it's $14.99 at Applebee's or the good stuff at Manny's.

Ryan Gomes continued his streak of solid play, posting a team high 25 points while getting to the line 7 times with 5 boards and 5 dimes.  Sebastian Telfair kept things brisk while logging only 25 minutes and 3 assists.  Mike Miller, despite coming out of the gate looking to score with 6 shots early, ended up with only 12 shots, thus ensuring that a poor little kitten would meet its maker at the hands of a hungry puppy.  Remember Mike, every time you shoot under 15 shots, a kitty gets it.  How many more cats are you willing to threaten with your non-shooting ways?

Kevin Love had his nicest game in a while, stepping up with 19 points, 11 rebounds, and 4 assists with Randy Foye out for the game.

For their part, Memphis seemed at its relative best with Darko Milicic and Darius Miles out on the court.  Marc Gasol, who had recently had one of his best games of the year, was remarkable in his inability to take advantage of his size advantage against a smurf-like Minny rotation.  O.J. Mayo did nothing in the vein of Brandon Roy to remind fans of past Wolves trades.  In fact, the Wolves were so in control of this game near the end that a chant of "OH-jay may-OH" could be heard from the Target Center faithful.  When was the last time a home crowd got after an opposing player like that?

Getting back to the whole a-steak-is-a-steak meme, at one point of the game the Wolves ran out a rotation of Craig Smith, Brian Cardinal, Kevin Ollie, Sheldon Williams, and Bobby Brown.  What do you think the Vegas odds were at the beginning of the season to see that 5-man lineup trotted out for extended playing time?  Did they help get the job done?  Yep, but at times it seemed even less than Applebee's fare; it was almost like finding an everything-must-go bargain NY Strip steak in the Rainbow Foods bargain bin.

I'd like to say that there was something to be learned about last night's tilt.  I'd like to say that there were a bunch of things I could point to as future indicators of success.  I can't.  The Wolves did what they needed to do but I'm just not going to get all that excited about an Applebee's special.  It was what it was.  I'll never turn it down but I'll save my excitement for the next time they treat me to Manny's.