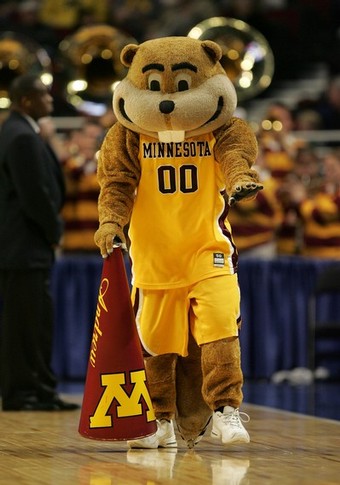 I'll have a game wrap up in a bit.  Before I do that, I just want to remind everyone that you only have a few hours left to fill out your Hoopus college brackets.  You can do so by clicking here.  If that doesn't work, head on over to Yahoo Sports and search for the group "Canis Hoopus".  Our motto is "Rubio or Bust".

As for the tourney, one of my two schools is in the tourney and the other one...well, it is a shame that the mighty Creighton Blue Jay had to fall victim to the Arizona Wildcat.  God is angry Arizona.  Jesuits never forget or forgive.

Go fill out your bracket and don't forget to check in with our fellow SB Nation blog The Daily Gopher throughout the day.  Also check out this Yahoo Sports article on Tubby Smith.  I still can't believe they landed the guy.  Go Gophs!!!  If you win, I will finally have a chance to buy a maroon and gold "Duck Fuke" shirt.

UPDATE: I have a last minute meeting this morning so I won't be able to toss off a game wrap.  In lieu of one here, please head on over to our sister site At the Hive or Britt's place where you will be treated to fine Corinthian game wraps.  I will say this: last night's tilt was very much in the same mold as the loss to San Antonio.  The only thing that was different is that San Antonio is better than NOLA and the Wolves made things a bit closer down the stretch.  In both games Kevin Love played well in the 2nd half, had trouble defending the pick and roll (especially on the winning bucket against NOLA), and was the 2nd best player on the court behind the opposing team's point guard.  If it weren't for Brook Lopez (and maybe Russell Westbrook) I would be starting the Love-for-R.O.Y. chant right about now.

What I would ask from all of you is that you put a list of what players you will be watching during the NCAA tourney.  Here are the guys I will be paying attention to:

I have a sneaky feeling the Wolves will end up with one of those players.

PS: Kelly Dwyer has a game wrap here.  He makes note of the amazing offensive foul call on Bassy for passing the ball and hitting Chris Paul with his arm.  Seriously.  It happened.  This call was on the heels of Rodney Carney dunking a ball against the Spurs only to have it bounce back out because a Spurs player was holding the net shut.  I won't complain because the Wolves were also the recipient of some bad/questionable calls of their own.  Kevin Love abso-frickin-lutely baited Hilton Armstrong into a foul last night with the clock winding down by hooking him with a chicken wing.  It was an absolutely veteran move and it was the first time I can remember in a long time where a Wolves player got the benefit of the doubt form the zebras.

PPS: Did I really just hear Paul Allen on KFAN say that Blake Griffin is better than Mike Beasley?  Diseased.