Share All sharing options for: College year-end draft board pt ii, the wingmen 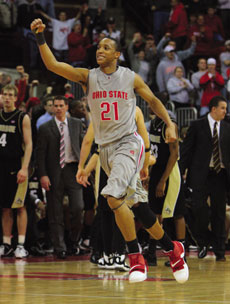 OK folks, let's get to it.  You can read about the Hoopus Score in pt i of our end-of-the-college year extravaganza here.  Basically, what we're about to give you is a two-pronged score that measures quality (efficiency/poss-based stats) and quantity (net number of positive events/game) of this, that, or the other college player.  It is a formula that has its limitations but also a fairly decent upside.  Last year an early version helped us identify our top 10 picks and it has since been adjusted to account for a shortcoming in being able to give enough value to guards (see Westbrook, Russell) and to properly weigh the value of wings (see Alexander, Joe).  We still got a lot right, with Kevin Love and Brook Lopez clearly identified as the BPAs with the Wolves on the clock with their top pick and Mario Chalmers as the BPA available with their top 2nd rounder.  Here are a few of last year's rankings with updated scores:

Please keep in mind that these scores are only useful within a specific year and player type.  The purpose of the Hoopus Score is to help you rate players in the current draft.  Eventually we'll be able to have a unified theory that goes year-to-year....but not now. Anywho...

We think we've worked out a few of the kinks this time around and with no further delay, here are the wings/big guards:

Let's take a look at the top 5 on the efficiency side of things:

Here is the net production side:

OK, before I go on to briefly sing the praises of Evan Turner, let me write a bit about Mr. Derozan.  Not too long ago I jokingly compared him to former Wolf Gerald "Cupcake" Green.  While I was for the most part joking, the point of the statement was that Derozan is more athletic potential than anything else at this point.  After looking at his stat sheet, I could not have been more wrong with that comparison.

Derozan is shooting 56.1% from 2.  While he can't seem to hit the broad side of a barn from beyond the arc (18.2%), his shooting from inside is 5-6% higher than everyone in the top 5 on both sides of this equation except for Aminu (who shoots 57% from inside the arc).  Derozan has the 2nd highest number of OReb adjusted for pace and 40 minutes of play.  He has an Oreb% that would place him in the upper levels of what would be expected from the 2 guard spot.  He doesn't turn the ball over a lot.  His handle isn't developed, yet he still carries a very respectable 40% FT rate.  Despite his lack of a 3 point shot, he doesn't take a boatload of shots to score his points.  To give you an idea of how nice of a thing this was to see in an athletic freshman wing with an NBA body, no outside shot, and a developing handle, Derozan scored 485 points on 367 shots (1.321/shot) while Texas guard A.J. Abrams needed 484 shots to get 580 points (1.198/shot).  Best of all, Derozan forced nothing this year at USC.  He seems to be a team player with miles and miles of upside.

This has nothing to do with his tourney play: Derozan is the 2nd best wing on the board and he hasn't even begun to tap into his potential.

The best wing on the board is Evan Turner.  I've gone on and on about him all year so I won't rehash it all here. Size, rebounding, passing, defense, solid character...it's all there.  I don't think he has the upper-level upside of someone like Derozan, but he'll be as close to Brandon Roy as the Wolves are going to get at this point.

Beyond Turner and Derozan, I think Aminu is the obvious 3rd choice.  He has fantastic quality numbers and the quantity side's relative lack of strength may run into the same issue that probably plagued Jeff Teague: there simply wasn't enough pie to go around on Wake Forrest.

After Aminu, it's pretty much a crap shoot.  I will say that I really like Terrance Williams.  He is a stat sheet stuffer and while his quality score was simply ok, his quantity score was the 2nd best amongst the wings.  He's big and athletic and he looks to be the type of player that could defend at the next level.  I'm not sure that makes him a starter, but as a big fan of Trevor Ariza, this is the type of player I think a team could reasonably expect  down the line with  the Louisville wing.

The most disappointing players on the wing list are Earl Clark, and Austin Daye.  Both of these guys look like they were put on this earth to play basketball.  They are long and athletic, they can both show bursts of awesome quickness for their size, they have streaks of play where you really just have to shake your head and wonder how they can be stopped.  They also are equally (and relatively) inefficient; Clark doesn't get to the line well and isn't that good of a shooter, while Daye doesn't get to the line and carries a 5.2 OReb% on a 6'11" frame.  Sorry, that sucks.  Young is...disappointing isn't the right word.  He is what he is, just like the rest of the middle of the wing pack: Budinger, Smith, James, and Summers.  I think teams will get servicable 10th men in all 5 of these players.  I think teams will get starters with Turner, Derozan, and Aminu.  They will get an excellent 6th or 7th man with Williams.  Derozan and Aminu are still raw enough to be considered scary lotto picks, and they may not start for a year or two, but I think they will eventually work out, especially Derozan.

That about does it for the wings.  I'll put up the bigs post in a day or two.