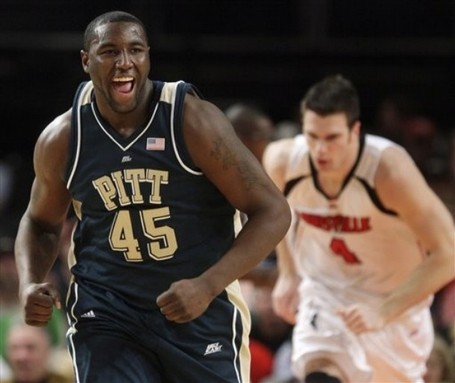 OK, you know the drill by now.  You can read the first two draft sections here (guards) and here (wings).  Also, just in case you're wondering, Griffin is far and away the highest rated player in this draft so we're leaving him out of the proceedings. It's a 1-man draft.  A menage-uno, if you will.  Let's get moving:

OK, long time readers of this site know that they won't hear this too often, but I want you to ignore Thabeet's first number.  Why? Because this is a good example of why scouting is important and why you need to collect as much data as possible on a player in order to make an informed decision.  There is no such thing as a unified single player eval stat (even if there were, it wouldn't be of much use; the Hoopus Score is just another way to create a floor upon with which you can begin to grade talent) and I'd like to point out a few things specific to Mr. Thabeet.

Thabeet carries an absurdly high FTRate (77.2) and eFG (64.5%).  He also carries an absurdly low %Poss (19.7) and %shots (17) for someone with such good stats at the line and from the floor.  Put yourself in Jim Calhoun's shoes.  You have a 7'3" monster on your team who shoots 65% from the floor and gets to the line at an absolutely absurd rate.  Why does he only factor in 19.7% of his team's possessions?  Why does he only take 17% of the shots? A: He's not a functional player on 1/2 of the court.  He's 1/2 a player and horribly so, often looking like he has never been asked to put a little orange ball in a hoop before.  Even rarer than his height, Thabeet has the ability to disappear better than any 7 footer on the planet.   For every decent game he has, there are times where he gets dominated (see Monroe and Blair) or fails to show (see his game against A&M).  Basketball is a game of net possessions.  Yes, Thabeet will affect things on one side of the court more than your average big man.  He's huge.  However, I would strongly argue that he hurts far more than he helps by being absolutely inadequate on the side of the court where our favorite team already has a guy who will sit in the post.  If the Wolves landed him, at least it would be entertaining seeing opposing teams double Big Al off of a 7'3" center.  If Thabeet is to be the Wolves pick, they will have to work their way through a mountain of situational differences.  Zone vs. man defense; Big East vs. smaller conferences; Thabeet vs. opponents who weigh above or below 250lbs; and so on and so forth.  They will also have to figure out what he brings to the table that is not available in a traditional box score.  How many shots does he alter (in zone or man)? How many bad passes does he force (in zone or man)? What is his foul rate in zone or man? You get the picture.  There is something amiss with Thabeet's game.  Obviously so.  He's too big and too dominant in certain aspects of the game to be so hidden in others.  This is the case with every player but even more so with Thabeet.  Whoever takes him (or passes on him for good reason) will really, really have to do their homework.

The player I would really like to point out as the best big in the country is Pitt's DeJuan Blair.  Unlike Thabeet, Blair factors in on the offensive end of the court (while not being a slouch on defense).  He puts up over 1/4 of his team's shots and factors in 1/4 of their possessions while on the court.  He leads the nation in offensive rebounding, putting up a beyond amazing 24.2% OReb%.  Good. Lord. Blair is going to make some team very, very happy and if I were the Griz or Thunder and I was not the proud owner of a top 3 pick, I'd strongly consider moving down to the highest spot where Blair was available.  Hell, take him at 5.  I have zero idea how this guy is not in the upper-level lottery discussion.  He's a rebounding monster.  Kevin Love wasn't even remotely close to the offensive rebounding display that Blair has put on.  This guy is going to be a legit PF in the NBA for a long, long time and I think it is beyond crazy that he's not ranked higher on more draft boards.

Before I finally get around to admitting that Thabeet is the 3rd best big man in this draft, let's talk about #2, Cole Aldrich.  Simply put, Aldrich produces.  He has shown consistent improvement and he has an NBA ready frame.  He is another player that the league should hope the Thunder don't get their hands on.  For those of you who don't think that the Wolves should draft a guy that is listed at 6'10" in some places, the young fella has a 7'5" wingspan.  It will be very interesting to see his vertical and true height.

Beyond Blair, Aldrich, and Thabeet, the best bigs in this draft are Hill and Hansbrough.   One of the assumptions we are making with the Hoopus Score is that the quantity side matters more with bigs than it does for wings and guards.  If you are a large and athletic player, you should be shooting well from the field and getting to the line.  You should be gathering a lot of rebounds and blocked shots.  Net numbers matter for giants.  Plus, we've run the score back a few years and productive NBA bigs all have a nice quantity score.  Blair, Aldrich, and Thabeet all produce.  Hansbrough produces.  Hill produces.  Hansbrough ultimately gets moved down the list because he is an undersized college big who relies on getting to the line to score while doing very little besides putting the ball in the bucket.  Could he be a good passer and are his absurdly low assist numbers simply a reflection of his role in the UNC offense?  Perhaps, but that is something that pre-draft workouts and scouting will have to determine.

In terms of the Wolves' existing roster, and with an eye on the final part of this draft board series, here is how I would rank the bigs on the Hoopus Wolves draft board:

It was reported earlier today that B.J. Mullens will enter the draft.  As I have written a few times before, I think we're looking at Deandre Jordan pt. ii with Mr. Mullens.  I'm not sure he'd be worth the Heat pick, especially with players like Eric Maynor and Nick Calathes possibly on the board, but he would be an interesting pick-up with the Utah or Boston picks.

Anywho, that about does it for the bigs.  In the next post I'll combine all 3 parts into the 1st pre-draft Hoopus Draft Board.