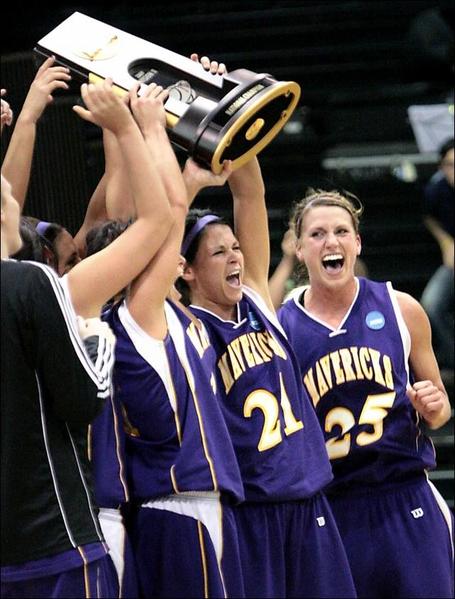 First of all, congrats to the Minnesota State Mavericks women's basketball team for winning their first D-II national championship.  For those of you who watched the game (it was on at the same time as the Wolves on ESPN2), you were treated to one of the finest women's games you will ever see in your life.  The final score was 103-94 with both teams combining for an eFG of .618% (including 16-34 from beyond the arc).  The Mavs closed out the game on an 11-4 run to win the title.  Yes, you could have been watching LeBron James but you also could have been watching up-tempo, competitive, hard-fought, and wonderful basketball in the D-II title game. You can read more about the game here.

The Mavs' victory means that Southern Minnesota is now home to three D-II national championships in the past 5 years (the Winona State men won in 2006 and 2008).  Can we please get one of these programs (WSU or MSU) on the track to D-I status?  North Dakota has 2 D-I teams and Iowa seems to have about a dozen; why can't Minnesota have more than 1?

As you can probably tell by now, I didn't catch the Wolves game last night.  Earlier this season we Wolves fans were treated to the LeBron show at the Target Center and there was no reason to see a replay against a depleted team that has quit on the season.  Instead of turning a game I didn't see into a stat sheet review or yet another long post on the state of the front office, let's finish up the Hoopus Draft board.  You can read parts i (guards), ii (wings), and iii (bigs) by clicking on the links.  Descriptions of the formula and its purpose are also contained in the previous posts.  Remember, this is a formula that weighs relative worth in a specific year among 3 distinct player groupings.  It is not a be-all/end-all formula (nor does it intend to be) and it should act only as a floor upon which a more complete player evaluation can be made.  That being said, without access to scouting, player interviews, tons of film, and advanced data points collected by an outside agency, it is the best we can do and it represents our bottom to top BPA list for the Wolves.  Let's get started:

OK, that's 30 players for 30 first round spots. The Wolves will end up with at least 3 picks so that was the motivation for making 3 tiers.  This draft is pretty thin but there are some decent players to be had later on in the draft, espcially in tier two.  This is where the Wovles could pick up their backup (or eventual starting) point guard.  We'll break things down a bit more as we get closer to the draft and we find out who declares and who does not, but this is the end-of-the-college season list.  What say you?