Share All sharing options for: GameThread: vs. New Jersey 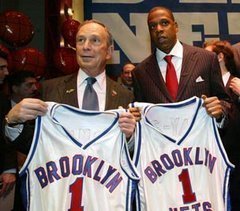 Since we can all agree that the Wolves are in rebuilding mode, regardless of how painful this is or how optimistic you are, it's worth taking a look at how other teams have gone about the process.

Rod Thorn has been the Nets' President since the Summer of 2000. After inheriting a roster built around Stephon Marbury, Keith Van Horn, Kendall Gill, Jamie Feick and Kerry Kittles, Thorn hired Byron Scott and turned the Nets into an NBA Finals competitor by his second season.

The squad that Thorn put together in 2 offseasons was built around Jason Kidd, Richard Jefferson, Kenyon Martin, and later Vince Carter (after trading Martin for picks) made the playoffs 6 straight years. They made it to the Finals twice and to the Eastern Semis 3 times.

Thorn needed a bit of luck to pull off a string of lop-sided trades (trading Eddie Griffin for Jefferson, Jason Collins and Brandon Armstrong; trading Martin for 3 1st round picks; and flipping 2 of those picks and expirings for Carter), but it's an amazing rebuilding job due to Thorn's timing, talent evaluation, cap management.

The team never won a championship, though, and those two Finals appearances were the first two seasons in that string of 6. So after hiring Kiki Vandeweghe as GM, Thorn decided it was time to rebuild again and shipped off Kidd and Jefferson for Devin Harris, Yi Jianlian, spare parts, a little bit of cap space, and picks. They made above average picks last year (Brook Lopez, Ryan Anderson and Chris Douglas-Roberts) and signed a few low-cost veterans to help hold down the fort until their youngsters are fully ready (Keyon Dooling, Eduardo Najera and Jarvis Hayes).

The Nets may be below .500 this year and not all of their youngsters are playing well, but the roster is almost completely revamped and if there's one thing we Timberwolves fans are coming to understand, it's that chemistry takes time.

Executives like Thorn and Vandeweghe are far from perfect, but they've shown a consistent ability to put together high quality rosters with few of the painful years that seem familiar to the Wolves (even after only 2 of them).