We'll see your sit-the-vets and raise you a Madsen

Share All sharing options for: We'll see your sit-the-vets and raise you a Madsen 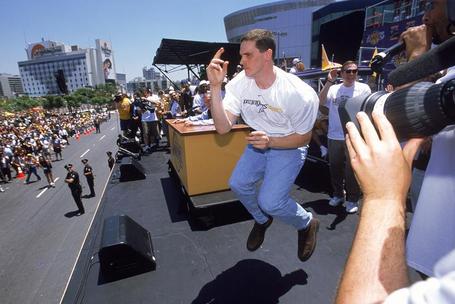 Tank on this suckas.  Not going to play your vets for entire games down the stretch? The Wolves will break out the Mad Dog. The man hasn't played 20 minutes since the start of the year.  Only going to play Anthony Randolph (a match up demon against the current Wolves roster) 12 minutes through the 1st 3 quarters?  The Wolves will give you a double dose of Brian Cardinal and Bobby Brown.

Ahhhhhh...the bottom of the NBA in March.  It's FANtastic.  Or, as an astute commenter put it, this was a tough match up for the fans.  Whatever the case, it's probably a good thing that Papa Glen announced the Early Bird ticket offer before the GSW game.

Speaking of the new ticket deal, I know that the knee-jerk reaction for many long-time Wolves fans (and more-than-casual Minny sports followers) is one of cynicism and mistrust when it comes to anything this team has to sell.  Those of us who have had season tickets have, at some point in time, all been hastled by an over-aggressive ticket staff.  We've all walked through the concourse only to be tracked down by someone in a Wolves shirt trying a little too hard to sell us something.  We've all been through year after year of the Kevin McHale front office administration where each and every single move has been pitched as a...well, let's just say that I'm not going to blame anyone for being a little cynical about this latest ticket offer.

What I am going to do is urge fans (long-term and casual alike) to give this offer a second look.  Despite what is currently happening on the court with Al Jefferson down for the season, this team is on the right track and it is positioned to do some really nice things in the next year or two.  This isn't a case of anyone on this site wanting to drink Kool Aide. Those of you who have read us for some time know that we don't walk the company line for the club.  This team is less than 2 calendar years removed from an unworkable superstar contract, Marc Blount, Ricky Davis, T-Hud, Marko Jaric (who just made his first shot in 22 attempts last night against the Lakers), and Trenton Hassell.  They are moving forward with 3 very movable expiring 09/10 contracts (Mike Miller, Craig Smith, Brian Cardinal), a stashed Euro center (Nikola Pekovic), reasonable cap space, roster flexibility, and the possibility of four first round draft picks (with two seconds).  If you add in the current economic climate of the NBA as a whole, the Wolves are positioned so as to be able to take on 1 or 2 high level players with their expiring deals and young players without breaking the bank.  Remember, each expiring deal can bring back 125% +$100k in existing salary.

Yes, you can look at last night's score, the team's record, and the new ticket deal and come to a pretty damn cynical conclusion.  I get that.  I've followed this team long enough to know not to blame anyone short of Dan Barreiro and Pat Reusse for taking a level-headed cynical position on the matter.  That being said, this team has done a lot right lately.  It isn't the easy target that Barreiro and Reusse used to use for an easy target when other material was scarce.  Things have changed and there has to be, at least, a recognition of this fact.  How have they changed?  While the ticket news will likely get glossed over on KFAN as a cynical ploy to move empty seats for a terrible product, check out this little nugget from the PiPress:

Taylor vigorously shrugged his head no when asked if McHale could return to his former front-office role and said he hasn't decided whether to permanently fill the position.

"We sort of have a plan laid out," he said. "And No. 2, right now what's happening is it's going OK. So I don't feel like I'm under pressure where I've got to get that done real quick. I want to look both internally and externally because I think it is a really important decision for the team.

McHale's former duties have been divided among general manager Jim Stack, assistant GM Fred Hoiberg and others this season and Taylor said the system has worked well.

Even so, he said he wants to look at how other teams operate and talk to internal and external candidates before making a final decision on whether he needs a vice president of basketball operations.

"That's what I'm trying to kind of figure out," he said. "Or do I just need a GM? We will have a structure. I want to go through it and see if the way I had it before, is that necessary? Or can I get it done without spending as much money but be more effective?

Taylor repeated that it won't be strictly McHale's call on whether he returns as coach but that he's not sure the Wolves could go out and get another who could do a better job with this group of players.

Incidentally, this is pretty much what we have been saying on this site for months.  They will have to make the best of it with what they have but this shouldn't preclude them from looking at what works around the league and bringing in a new set of eyes.  For those of you new readers, might I suggest a look or two at our Executive Search series. The McHale front office era is over.  "Country Club" is a dated term.  Does the team still have issues?  Of course, but they have changed and if even if you only aim to keep your cynicism current, you need to take into account the new realities with the squad.  Oh, $5 tickets and discounts for 95% of the seats in the house (to say nothing about the low monthly costs) to go see some NBA games (regardless of how much they may or may not matter) is a pretty good deal regardless of anything else.

BTW: Speaking of tickets, don't forget to sign up for Hoopus Night on April 11th (click on the link for details).  It's a little more than a month away.  We hope to see you there.  $25 and you get to sit in a suite with a bunch of basketball dorks.  What more could you possibly ask for?

Do we really want to talk about the game last night?  I sure don't.  It was Summer League in March and you probably could have scripted the game before it started.  It had everything: mismatched lineups, Mike Miller passing up shots, Mike Miller milking a soccer injury, Mark Madsen, Sheldon Williams, Craig Smith, Bobby Brown...uh....let's change the subject again.

I'd like to point you in the direction of a new Wolves site written by Sol Lieberman called Minnesota Timberwolves Examiner.  It's a good site you should keep your eye on.  His latest post is on Papa Glen's New Deal.  I think he has a fantastic approach to the site and the angle he is taking on the squad should fit in nicely with what Britt (game wraps), TWolvesBlog (aggregator), and we (stats, charts, draft talk, radical leftist politics) have to offer.  Balance is important in blogdom and Sol is not aiming at duplicating anyones effort....just as we do not attempt to recreate what already works with SG & Crew and Britt.

Finally, I would like to wrap this thing up with a quick note about the Warriors' TV crew.  All night long they were brutally honest with the talent the Wolves were running out on the floor.  Outside of the obvious respect due to Kevin Love, they didn't exactly have a whole lot of nice things to say about our favorite squad.  Their biggest target was Randy Foye. He wasn't so much as a target as he was a "This is it?" They were markedly succinct in their take: This is who he is and they don't see much room for improvement.  I'll let you draw your own conclusions but I will say this: More so than Love, a player who can fill in the gaps, Foye is the product of who he plays with.  He is not the type of player who can be the sole offensive threat on the court.  He is not the type of player you can put up against big off-guard.  He is the guy who will feel Big Al's injury the most (outside of Big Al, of course).  He is, at best, a 2nd or 3rd option.  This isn't a bad thing.  He still has great worth.  He still has potential.  It just really, really depends on who else is out there with him.  This isn't a strike against Randy or the team.  It is what it is and, as mentioned above, they have a tremendous opportunity to improve his supporting cast in the next season.

OK, I lied; I have one more thing to point out.  This team misses Sebastian Telfair.  Bassy may be a limited player but he's still a guy that has a positive adj +/- and he remains the only player on the squad with a positive net +/-.  I know these stats have a large amount of noise within them, but Bassy makes this team tick more so than any guy outside of Big Al.  He's the only legit point on the squad and his competitiveness is greatly missed when he's out of the lineup.  Going forward, one of the most interesting questions in the off-season is this: If the Wolves are in a position to draft James Harden, do they pull the trigger and eventually bring Foye off the bench or do they draft the best point available?  Or, do they hope that Cole Aldrich comes out? Whatever is the case, I'm sure a lot of changes are on the horizon.

UPDATE: Looking at the post I see that one of my original paragraphs has been edited out. I don't have the original post anymore but the gist of it was that while the Wolves just put out a fantastic ticket offer and while they have a lot of wonderful assets and opportunities in the next year, they can't afford too many more clinkers like last night's game lest they want to give fans any more excuses to be as cynical as possible about the product.  I cannot overstate how awful last night's game was.  From end-to-end dunks to garbage rotations to whatever else you want to toss out there, it was brutal.  Again, Papa Glen is lucky he didn't have to make the ticket announcement today.  This is a tough sell as it is; it gets tougher with games like the one against the GSW.