One of the ongoing hot topics in Wolves land this year has been Mike Miller's reluctance to shoot the ball as he has in seasons past.  Miller can lecture Strib reporters about James Naismith's favorite game until the cows come home to the Corn Palace, but the fact remains that he is averaging nearly 4 shots/game fewer this season than his career average.

There have been a few attempts at explaining why Miller is taking fewer shots; he's uncomfortable, he's trying to be a team player, he's coming up on a contract year and he's trying to take as many "safe" shots as possible, and so on and so forth.  What we haven't seen being asked yet is this: Where is Miller taking fewer shots?  Is there any particular spot on the floor where Miller is shooting less from than usual and what does this have to say about his game?

Without having access to any sort of internal team data set (or any league-wide extra data points), all we here at Hoopus have to go on is NBA Hot Spots.  Here are the results from Miller's past 5 seasons: 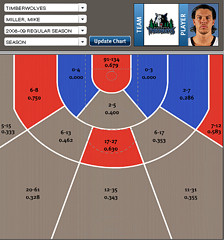 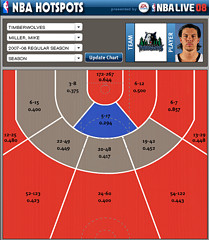 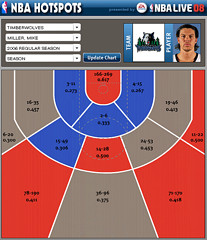 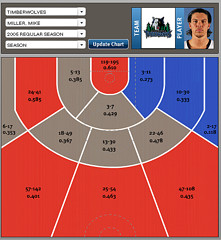 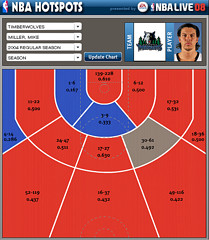 First of all, it doesn't take much to see that this is Miller's worst year from the floor in terms of being an all-around threat.  Only 2006 matches his relative inability (and we use that term very loosely) to hit from everywhere out there.

Secondly, in order to gain perspective on the reds and blues, we need to know what his favorite areas are and how many attempts/game he takes from effective areas.

Miller's favorite spots on the floor are the left and right wings beyond the arc, and inside.  Let's plug in his games played and see what he averaged per game per year from these areas:

It's the right wing 3 folks.  He's averaging a career low from the left wing as well, but it's not completely out of whack and without something of a precedent as is his current performance from the right wing.  Why is he not taking shots from the right wing beyond the arc?  I don't have an answer to that question.  In this 5 year span he is averaging .424% on 547 shots.  This year he is shooting a 5-year low of .355% from that spot so that probably has something to do with it, but he's still shooting relatively well from that spot this year compared to his other long-distance zones.

I think the main cause for this phenomenon is that Al Jefferson is a dominant player on the left side of the court.  It's where he lives and thrives, and if the Wolves were going to run an in-out game with Miller and Big Al, it would be on the side of the court that Big Al is most comfortable on.  We obviously don't have the type of data it would require to complete a full study on the subject, but perhaps we can come up with a simple theory: Miller is a "right handed" type of player--someone who is more comfortable operating on the opposite side of the court as the Wolves' best player, who is a "left handed" type of guy.  I'm sure the answer to this question is much more complex, but this is as close to a stat-based theory we can come up with considering the available data.

UPDATE: In a bit of serendipity True Hoop put up a post from Basketball Geek about shooting percentages, lineups, and location.  We'll dig through the data he posted on the page and see what we can find concerning Miller and his teammates.