The benefits of Bassy

Share All sharing options for: The benefits of Bassy 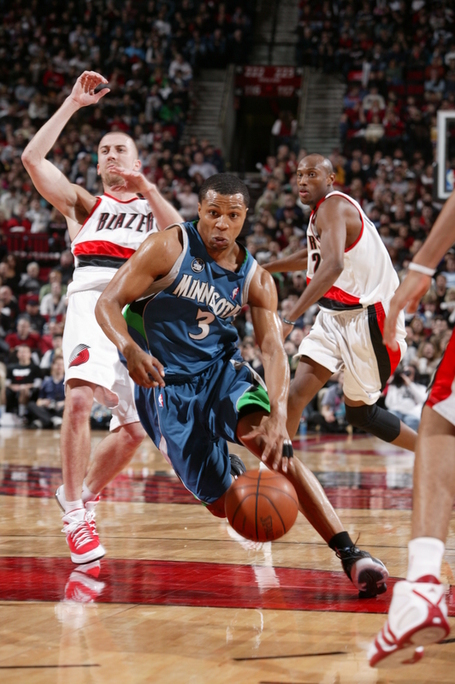 I know I said I was going to give a run-down on the last two games but I believe last night's tilt was more informative on several levels so I'm going to focus on that one instead.  Besides, the game against the Lakers was just plain ugly.

During the last two games the Wolves, as a team, are carrying a -22 +/- with a 0-2 record.  During his 59:58 on the court, Sebastian Telfair posted a +1 +/- with 36 points (on 12-25 shooting), 7 assists, and 5 turnovers.  Even after a 9 game losing streak, Bassy is the only player on the team with significant minutes to have a neutral or positive +/- over the course of the season.  He currently carries the 2nd highest adj +/- on the team.  As we have made the case several times over the course of the season, more so than any other player not named Big Al Jefferson, Bassy is the straw that stirs the 2008/09 Wolves' drink.

During the Portland game, Bassy had the ball in his hands for a large chunk of the time he was in the game.  When he wasn't on the ball, Mike Miller was running the point.  When the 4th quarter rolled around, Bassy was on the bench with Randy Foye handling the on-the-ball duties.  This lasted all of 2:12 minutes before an equally ineffective lineup of Miller, Kevin Love, Craig Smith, Rodney Carney, and Kevin Ollie was trotted out for the meat of the final quarter.  It took all of about 10 seconds for the Blazers to trot out Joel Pryzbilla against the mini-lineup and for the Blazers to run an athletic, smaller "4" against either Love or Smith.

While all of this was going on, Bassy was on the bench; sitting there until there was 5:47 left in the game, when he was subbed in with Ryan Gomes and Foye.  Even with Bassy in the game, the Wolves found themselves in a pickle when Foye was forced to initiate the offense.  The most obvious flub came when Gomes set up for a pick and Foye picked up his dribble while initiating a pass in the general direction of Gomes...which was promptly picked off and taken the other way.  The entire night was filled with problematic plays from Foye whenever he was charged with initiating the offense or creating something on his own from beyond the perimeter.  I think we saw 2-3 step-back-on-the-line long 2s and his primary offensive move was to up fake his defender off his feet before jumping into him to draw the cheap foul.

When Bassy had the ball in his hands, the offense moved.  Even when he went for his own, Bassy broke down the opposing defense and got into the lane or to an open spot on the mid-wing for a mid-range jumper.  He spent the night getting pretty much what he wanted against Steve Blake and you knew that, with him in the game, the Wolves stood a chance with a higher pace and superior ball movement, i.e. things that McHale has been calling for since the injury.  More so than any other player on the court, Bassy exposed one of Portland's biggest problems: it's point play.

Last night the Wolves got to see the full display of Blazer points; from the serviceable Blake to the questionable Sergio Rodriguez to the awful Jerryd Bayless, Our Beloved Puppies Zombies were able to count on their points (well, mostly Bassy) to get the job done against the competition.  Blake is a nice player.  He's a safe player.  He's a limited player that doesn't offer a roster with as much flexibility and speed as the Blazers should have much of the same.  He won't lose you a game on his own but he also won't stop his opposing point from allowing the tempo to be controlled or to dictate large chunks of the action.  Rodriguez seems to be a streaky player who is comfortable playing with Rudy Fernandez.  He's clearly not someone that can be entrusted with more than 20 mpg on the ball.  As for Bayless, I think we all got a good look at why the guy has been on the bench for most of the year.  In just under 7 minutes of play he logged 3 fouls and 2 blocked attempts while forcing everything that came near him.  He also quickly became the target of aggressive pick-and-roll action on the defensive end of the court.  Blazers fans, I can't tell you the last time the Wolves singled out an individual defender like this before.  That, more than anything else, led to his short time on the court.  He was obviously out of his element and didn't seem to have the first clue what he was doing out there.  He's further away from the point than Randy Foye ever was....and that's saying something.

I'd like to go back to the 4th quarter rotations for a second.  My knee-jerk reaction to seeing Bassy sit for so long (while a questionable rotation was on the court, no less) was to blame McHale for game mismanagement.  On second thought, this simply wasn't the case.  McHale had one of his better game management efforts last night.  Outside of some Kevin Love business (more on that in a bit) he kept his team close and fresh with the limited resources on the bench.  Of course he's the guy most responsible for having said limited resources on the bench, but that's another post for another day.  McHale worked the refs for a few favorable calls, he had his team ready to play hard, and they came with a game plan that really fit the circumstances.  Hell, they even had the shot they wanted with the guy they wanted taking it with time expiring.

Getting around to the Love business, the Big Piranha picked up 2 fouls in the first quarter and was not put back into the game until about 7 minutes to go in the 2nd quarter.  Upon entering the game, he quickly picked up his 3rd foul and headed straight back to the bench for the remaining 6:40 of the half.  After the half, he lasted all of 3:22 before picking up his 4th foul and sitting down until 9:37 remaining in the game.  Over his last 10 games, Love is averaging 27.9 mpg.  Last night he went for 24:55.  Against the Lakers he went for nearly 35 minutes.  Because of the fouls, Love lost at least 3 minutes of game time.  He could have lost up to 10.

For the life of me, I will never get why coaches feel such a need to pull players with 3 fouls with so much time remaining in the half.  Are the minutes leading up to the half any less valuable than the ones at the end of a game?  Will the player with 3 fouls see more or less court time if you leave him out there with 3 fouls?  Just how much of a liability would that player be on defense if you left him out there?  Last night LaMarcus Aldridge went 2-14 from the floor.  Love was fairly effective in staying between Aldridge and the bucket.  Granted, Aldridge got to the line a ton, but he wasn't exactly making the Blazer offense tick.  Last night, he was someone you wanted to see the Blazers run the ball through, not Brandon Roy.  Anywho, this isn't a quibble with McHale so much as a philosophical belief that pulling guys with 3 fouls before the half isn't all it's cracked up to be.

Before I wrap this thing up with some final thoughts on Bassy, let me just ask this: how fun is it to watch Roy do his thing late in the game?  He really has an amazing ability to slow things down and get to where he wants to go with a seemingly minimal effort.  I think that in order for the Blazers to be a really upper-tier team, he needs to do so in a far greater share of the offense (I'm talking a LeBron, Kobe, D-Wade  usage rate/%poss type of share) and, ideally, with a better point guard.

One of the most interesting things about last night's broadcast on League Pass was listening to Portland's announcers have a hard time getting their minds around what they were seeing on the court in Bassy.  It probably extended to the crowd; you could almost see the thought bubble, "This guy was a Jail Blazer" float out over the court.  Over at Dime Magazine there is a feature debating whether or not Bassy is a bust.  The article also asks whether or not he is a serviceable NBA player at this point.  I think Bassy is proving himself to be quite a serviceable player at this point in time.  I really don't think guys like Steve Blake offer anything more than he does (Rodriguez and Bayless clearly don't) and should Bassy have the opportunity to play with superior talent at this point in his career, I think he would do even better.  Whatever he is, he's not the worst rotation regular in the NBA.  He's not a terrible point.  His shot will probably always be broke but that doesn't mean he can't be effective.  Is he a starting point in this league?  Not next to Randy Foye.  But could he be an effective starter with Foye coming off the bench while playing next to a large 2 guard?  Steve Blake isn't Steve Blake without Brandon Roy.  I doubt he'd be Bassy if he was next to Mr. Foye.

PS: I would be remiss if I didn't mention Gomes' monster game.  Over at Blazer's Edge commenters were wondering who this Gomes character was.  First of all, he's one of the best character guys in the league.  He's also averaging about 18/6/2 over his last 10 games.  He's one of those guys who can be a solid James Posey-type of player on a championship team.  It will never cease to baffle me as to why Boston didn't make a run at him during free agency last year.  If the Wolves ever turn things around, he will be a big reason why.

UPDATE: I forgot to mention this in the main article, but during last night's broadcast, the Portland announcers mentioned that Stan Love had some "interesting" things to say about Minnesota's management during a recent appearance on a Portland radio show.  They were quick to point out that Love also gave some bad info concerning his son working out for the Blazers (they pretty much called him a liar) and a quick Google search for the elder Love turned up a story about him being sentenced to 5 years probation for embezzling $300,000 from his Beach Boy brother Mike.  His other brother Steve actually saw some prison time for embezzling over $1 million from the group.  Anywho, I couldn't find anything about the radio appearance and if any of our fine readers have any information on this subject, please drop me a line or leave something in the comments.