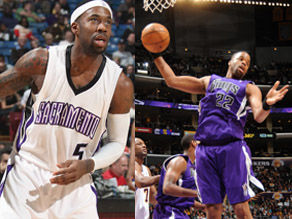 This is it. End of the line for 08/09. Doesn't look like we'll be reaching that 20-game improvement goal.

I'm excited to see how Rashad McCants is received tonight. No need to boo the guy (it's not like he's Sprewell or anything), but I ain't like KG's coming back to play in the Target Center or anything.

Randy Foye is out tonight and Kevin McHale hasn't publicly stated whether or not he'll be back. From Don Seeholzer at the Pioneer Press:

The Wolves have given McHale a week to make up his mind and Taylor has said he expects to make an announcement within the next two weeks, when the team names its new head of basketball operations.

I don't blame him, though. There's not a whole lot to gain from the team's perspective by announcing anything publicly before the seasons officially over.

That said, I haven't changed my stance that in order for the team to undergo the executive leadership change I think it needs, the guy who put the team together can't be sitting on the bench.

I think McHale would be a great big man coach for Al and Love, but even that might keep him too close for the comfort of a new regime.

This will be an NBA version of senior night for the Wolves, who will start veterans Kevin Ollie, Mike Miller, Mark Madsen, Brian Cardinal and Jason Collins in recognition of their hard work this season.

"That's what Miller said," McHale said. "Miller wanted to know if I'm going to give roses to his parents."

I'd worry about this being an ugly game for the Wolves, but we're closing the season out against 1 of the 5 teams that actually has a worse record than we do.

For Kings coverage, visit Tom Ziller, a baron of the hoops-blogging world, at Sactown Royalty.