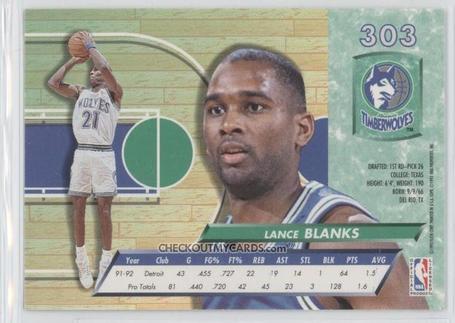 Since Glen Taylor announced he'd like to wrap up the GM search in the next few weeks, I figured kick-starting the Executive Search might not be a bad idea. Cleveland Cavaliers Assistant GM Lance Blanks is the most talked about candidate we have yet to cover, but unfortunately there's not a whole lot out there on him.

As you can see above, Blanks played for the Wolves after being drafted by the Pistons in 1990. His career lasted only three seasons, but he surfaced again in the NBA when San Antonio hired him as a scout in July of 2000.

He rose the ranks to Head Scout the following year and became Director of Scouting in 2002. Blanks described his time in San Antonio as focused on draft work and college scouting early on, moving to pro personnel later on. Considering the Spurs' ability to find draft diamonds drafting from low spots year after year, Blanks must have some skills in that department.

It's impossible to know how much Blanks had to do with any of these picks, but the Spurs hit on four late 1st rounders in a row (Udrih ain't great, but he can play). And they hit on Scola very deep. They traded half of those 1st round hits and missed on all but one 2nd rounders, but those 1st rounders present a very strong track record.

Being tasked with building a championship team around LeBron James may be a dream job, but it comes with an immense amount of pressure. And Ferry and Co. almost screwed it up by over-committing money to a mediocre supporting cast (do Larry Hughes, Damon Jones, and Donyell Marshall ring any bells?).

Moreover, the draft scorecard for Ferry's team is spotty:

Despite the missteps, however, Ferry righted the ship with a couple of major moves that have paid off (no doubt with the counsel of Blanks and well as Assistant GM Chris Grant, Executive Search article here).

Although it's purely inference, I think the rundown on Blanks is that he's a good judge of talent and has witnessed and participated in both poor stretches of moves and stretches that pull a team out of personnel peril. And that San Antonio pedigree ain't too shabby either.

If he gets a GM job this offseason, Blanks would join Ferry, OKC's Sam Presti, as the league's personnel heads with front office experience in San Antonio. But, then again, the same could be said for Dennis Lindsey.