Updating the Draft Board

Share All sharing options for: Updating the Draft Board 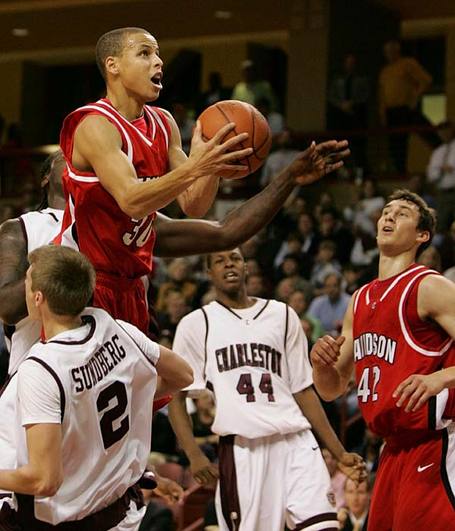 OK, now that we know who is in and who is out of the 2009 NBA Draft, it's time to update the draft board.  Right now we are assuming that the Wolves will draft 5th and that Blake Griffin and Ricky Rubio will be off the board.  Everyone else is in play.  Before we begin, here's the end-of-the-college-season draft board with Hoopus Scores and crossed-out names for the players that are staying in school:

It wasn't a very deep draft to begin with, but those 7 players are really going to be problematic for the Wolves' second first round pick, especially when you consider that most of the players staying in are viewed as "potential" guys who would be worth a peak with the 18th pick.  Here are the updated tiers with a few changes here and there that I will explain after each tier:

OK, first of all, I just want to remind people that I have removed Griffin and Rubio from this list.  Griffin is the clear number one pick and Rubio is a Euro guard that none of us really know how to grade.  Right now we are operating on the assumption that the Wolves are drafting with the 5th pick.

As you may have noticed, not only have I removed the players who are returning to college from tier one, but I have also struck out Tyreke Evans.  I did this for a few reasons.  First, I have to be consistent with the Hoopus Score and his low number is pretty hard to overlook.  Even though he came on late in the season, his improved numbers were not nearly as good as were his peers'.  I have gone back and forth on Evans several times.  No other player in this draft has the potential to change the Wolves as much as the Memphis guard.  If you believe he can start at the point in the NBA, then by all means he should be near or at the top of your draft board.  6'6" guards with massive wingspans don't exactly grow on trees and his pick-and-roll potential is off the charts.  What is also off the charts is his ability to turn the ball over, miss jumpers, and dominate the ball.  Let's take a look at the three players that are in direct competition for the best non-Rubio (and non-Lawson; more on that later) guard in the draft:

There are a few things that jump out right away with these numbers.  First of all, how on earth does someone with a .514 2FG% have a sub-50% eFG?  A: By shooging 34-124 (.274) from beyond the arc.  While I have said in the past that Evans is a hard player to overlook in this draft, what is also hard to overlook is his amazingly awful outside shooting.  The anti-Evans argument is that he's simply too bad of an outside shooter to make his positive attributes worthwhile.  The pro-Evans argument is that he's a 6'6" guard with an amazing ability to get to the rim and he would be paired with a shorter guard (Randy Foye) who can shoot the spot up three.

Moving beyond the generic pro and con arguments, Evans simply isn't that efficient of a player; doing very little per possession that would place him above guys like Curry and Harden.  The big problem here is that Evans takes a large chunk of jump shots (40% of his shots are jumpers according to this DX post) and he makes less than 30% of them.  What this means is that he can't score when he's not in transition or penetrating the lane.  This was abundantly clear in Memphis' year-ending loss to Missouri.  Evans made only 2 jumpers in the game and his outside game was so non-existant that Missouri was able to survive with him going nuts in the paint.   It's not just that he can't make threes.  Tony Parker has been a terrible three point shooter while making a living in transition and the paint.  He also has a mid-range game that, at the very least, has to be respected.  Evans simply can't make jump shots.  I can't think of a single successful NBA perimeter player who makes a living in the paint and at the line while not being able to shoot a jumper over 30%.  That's sub-Bassy territory.  If you throw in the fact that no one really knows if he can play the point in the NBA, he is far and away the most hit-or-miss prospect in this draft.

Even Evans' rebounding numbers are a bit of a fluff.  While he has a oreb/dreb rate of 5.0/15.3--which massively outpaces Curry's 1.9/12.3 marks--this may simply be a product of the system, as he grabs a team percentage of 13.5/25.8 off/def rebounds compared to Curry's 13.1/25.7 marks.  In other words, Curry rebounded for Davidson almost exactly as well as Evans did for Memphis.

Moving on to Curry, allow me to geek out for a moment.  I know the thought of a 6'3" shooting guard being the third best player in an NBA Draft is something of a head-scratcher.  I know that a small-ball team like the Wolves seems like a weird place for a player like this to end up.  I get all of that.  What I also get is that Curry transitioned to the point while losing very little of his effectiveness and he put up efficiency numbers that make him a back court equivalent of Kevin Love.  Say what you will about the guy, but there is far more evidence that he will be a better NBA play maker and scorer than Tyreke Evans or James Harden.  Let's take a look at how he has improved during his three seasons at Davidson:

Here's the bottom line: During his three seasons at Davidson, Curry increased his share of the offense by nearly 10% while decreasing his turnovers, becoming a better play maker, taking fewer shots/possession, relying less on the three ball, and getting to the line more.  The more responsibilities he was handed, the better he played.  It's that simple.

What really intrigues me about Curry is the prospects of him playing pick-and-roll with Kevin Love.  Curry has one of the most developed mid-range pull up jump shooting games in recent college history.  While he may not be a fantastic finisher around the rim, he converts a higher percentage of mid range jumpers than does Bassy with layups.  If a defender goes under the screen, there is no doubt in my mind that his quick release will make him an effective NBA three point shooter.  I intentionally mentioned Tony Parker before as an example of a player who has a nice mid-range game combined with superior inside finishing ability.  Curry is a player who has an advanced mid-range game combined with superior exterior ability.  Whether or not that sort of inverse Parker-esque game works in the NBA remains to be seen, but there is enough to suggest that he'd be a good enough scorer where the team could get away playing Corey Brewer at the 2.  He's also solid enough with the ball that they could live with him having a relatively high percentage of team possessions.  In other words, he could be a high scoring point.

Wrapping up tier one, this draft is in many ways similar to last year's affair for the Wolves in that there appears to be two upper level talents (Griffin and Rubio vs. Beasley and Rose) and then some competition for the three spot.  Kevin Love was the right pick at three and five in last year's draft.  When in doubt go with efficiency and production over promise style and that is the lesson I am going to apply in this year's draft.  Curry is the third best player in this draft and he should be the Wolves' first choice if he is available with the 5th pick.

There is simply no way on God's green earth my head can overlook Tyreke Evans' outside shooting.  I can overlook the turnovers for a 19 year old point guard with 1 season of college; I can overlook questions about his selfish play; I can overlook a lot of things, but when a guy with that much talent has that poor looking of a jump shot, and when he shoots worse than the team's current diminutive point guard (much worse I might add), then no matter what positives he brings to the table (and there are quite a few), he's simply not a first option...even in a weak draft.

I've swapped out Maynor and Williams because both are seniors and Maynor has enough in his track record to suggest that he has put together a higher quality resume than the Louisville swingman.  Teague gets booted to the bottom of tier two because of the last 1/2 of his season.  He also is about as close of a player to Randy Foye as there is in college right now and the Wolves should only draft him as a last resort.

I'm not really sure what is the big deal about Jordan Hill.  He played on a middle-of-the-road college team and his stats are nothing to write home about.  His team mate (Budinger) could be a valuable back up at the next level but I just don't get the first thing about why he appears so high on so many draft boards.

The rest of this list is filled with players that probably won't make it very far in the NBA.  If I had to bet on one of them, it would be Sam Young because I think he could become a nice defensive player off the bench.  Damion James probably comes in at number 2 followed by Budinger.  As for the rest of them, here's hoping the Wolves can move the 28th pick for something a bit more substantial.

Wrapping this thing up, I think this year's draft, while thin, offers a solid chance for the Wolves to walk away with two solid rotation players.  Ideally, they would find a way to land in the top two and walk away with Griffin or Rubio.  Short of that, I think the best they can hope for is to walk away with Curry and DeRozan.  Curry is the best non-Rubio guard in the draft and DeRozan is the best small forward.  This sort of situation would almost demand that either Miller or Foye (or both) be moved but it would go a long way towards giving the Wolves more efficiency in the back court and more athleticism on the wing.

Playing along in Fantasty GM Land, here is a peak at what a Curry/DeRozan enhanced lineup would look like:

Obviously there needs to be some work done in terms of front court depth, but with Cardinal, Smith, and Madsen still signed, the Wolves could get by for a year without having what they need at the backup 4/5.  The bottom line here is that the Wolves would add a starting level player in Curry while drafting a player with more wing potential than anyone they've had on their roster in a long, long time.

PS: I should mention that I still can't completely shake the idea of the Wolves taking Evans with the top pick.  If there were any team in the league where a guy like Evans could walk into a starting point job, it is with the Wolves next to Foye and with Jefferson (a post player) and Love (future pick-and-roll/pop star).  With Miller at the three Evans would be surrounded by two....well, we'll have more on this after the lotto.  I'm sure I'll change my mind about the guy by then.  Whatever the case, Evans presents the Wolves (and their fans) with a pretty interesting dilemma.