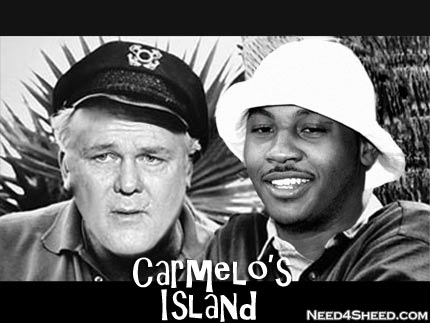 UPDATE: Sorry for the typos, not sure what happened in transferring from Word to here.

The Nuggets are on a six-game winning streak (11 of their last 12) after beating the Clippers handily last night. Already with 51 wins to their name, the hottest team in the league is the #2 Seed in the West with 5 games to go. Here's a simple look at the Nuggets' wins and loses this year (blue means a win, empty space means a loss):

While they've stumbled in a few spots this season, Denver's done a great job of recovering from losses by rattling off 3 or 4 wins in a row. Sure, it's a testament to their talent, but the chemistry that Chauncey Billups' arrival fueled is something that's prevented Denver from collapsing on itself, like they in the past. They're playing their best ball all season at the best time: heading into the playoff.

This situation is a rather stark contrast to the Wolves' who, despite a feel-good win over Utah on Friday, are still 2 of their last 8.

You already knew the Wolves' record was bad without looking at the graph, but what becomes painfully obvious with the visual is that the only positive consistency we could muster this year was in the Great Month of January. Other than those three solid blocks from December and January, the Timberwolves haven't strung two wins together all season.

We've discussed at length about how much slack we should cut the Wolves given injuries, a coaching change and the fact that we're in the early stages of a rebuilding process. But what's troubling about this season is the lack of growth that indicates a rebuilding process is working. Ryan Gomes has been all over the place, Mike Miller has not been the sharpshooter we all expected after acquiring him, and Randy Foye has put up solid averages and a couple good performances since Al Jefferson went down but I'd be hard-pressed to think of examples where Foye really looked on his game or exhibited the on-court leadership we need from our cornerstones.

So here we are with 6 games to go and as SnP put so well, we are not playing for ping pong balls this year. We're playing to build some chemistry and pride in a young roster that hasn't experienced many wins.

Foye and Craig Smith are still listed as doubtful.

Don't forget the Tweetup going on at 5pm at Champp's today, if you're into the whole Twitter deal. I'll be there in the flesh.

Check out Pickaxe and Roll and Roundball Mining Company for Nuggets coverage.