Share All sharing options for: Brandon Jennings and Nikola Pekovic 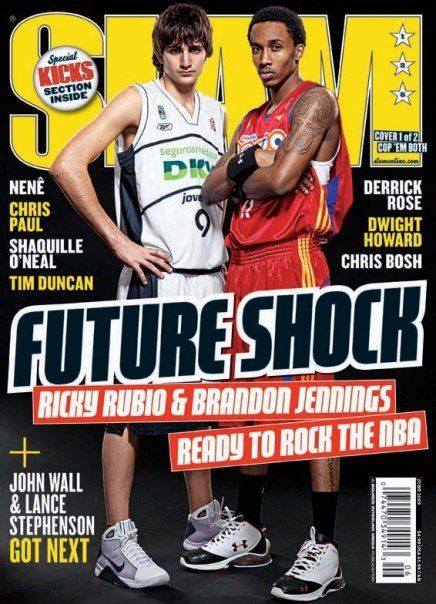 With all of the hype surrounding Ricky Rubio, it's easy to forget that another trend-setting Euro League point guard has also entered his name in the 2009 NBA Draft.

As a longtime hater of the NCAA, I have a special place in my heart for the first player who bucked the system, got paid for his basketball development, and likely learned a great deal about professional ball in the process.

Unfortunately, and despite his wonderful accomplishment of challenging the NCAA status quo, Brandon Jennings has flown under the radar in terms of NBA fans in general and Wolves fans, more specifically.

If you haven't been following Jennings, you really should.  He runs one of the best athlete blogs out there called When In Rome.  You can read about his trips to famous tourist sites, all-time favorite point guards, earthquake relief donations, and so on and so forth.  You can check out his Draft Express page here and his EuroLeague stats here.

The primary reason why Jennings has seemingly flown under the radar in the US is that his playing time and numbers haven't matched what some of his accomplished peers put up in college.  The reason for this is that the EL is a different league than the NCAA and the NBA.  Scoring rates, rebound rates, shooting percentages, and assist rates have a different relationship between the EL and the NBA than they do between college and the NBA.  Since Jennings is the first player to come from high school to the EL, we don't exactly have a large sample size of data that would allow us to make an informed judgment about just how well the 19 year old point guard is playing in the 2nd best professional league on the planet.

Despite all of this, there have been some attempts to draw a comparison between the EL and the NBA.  John Hollinger gives it a go here:

Plugging Jennings' EL numbers into this formula, we get a line of 11.6 points/40 minutes, an assist rate of 27.5, a shooting percentage of 34.1, and a 9.1 PER.  Again, keep in mind that we're talking about a 19 year old player in the 2nd toughest professional league on the planet.

This site has never made an attempt to rate EL prospects because we have neither the time nor resources to do so, but there are a few things we can determine about Jennings' game.  First, he doesn't shoot the three well at all.  He has a 26.8% fg% from beyond the arc in the EL while taking 5.2 attempts per 40 minutes.  37% of his shots are from beyond the arc.  Scoring wise, he posts 0.99 points/possession while turning the ball over 0.16/possession.  He has a 1.37 a/to rate with a -0.59 PPR.  The problem here is that while I have a pretty good idea of what these numbers would mean in the NCAA, I have zero clue what they mean in the EL.  My gut tells me the shooting numbers are worrisome.  He does shoot 45.7% from 2, but the outside shooting is problematic.  The Wolves already have an undersized guard with amazing quickness who can't shoot from outside.

Where Jennings may have a hand up on Bassy is that he appears to have something of a mid-range game and/or an ability to score close to the hoop.  My guess is that his assist/play making numbers are pretty solid considering where he plays and the amount of time he receives on the court.  That being said, I don't know and I wish I had a better way of letting you know more about his game via the stat sheet.

What I do know is that the thing that has impressed me the most about Jennings is that he has handled the entire situation with class and professionalism.  Check out this passage from an ESPN article earlier this year:

"If he had gone to college, they would've babied him," says one NBA scout. "This will make him mentally tougher. And after playing for this coach, he'll know how to play the game."

Getting booted from practice proved to be a blessing for Jennings. Not only did it get his attention, his reaction won him respect in the locker room. Repesa forced him to apologize to the entire team the next morning. By the time the club returned to Rome to prep for preseason games, Jennings was diving for loose balls, pestering his man on D, fighting through screens and moving without the ball. He started pushing the rock upcourt with passes instead of fancy dribbling, nixing the urge to add to his highlight collection.

His foreign teammates started to see a player they liked on the court and enjoyed being around off of it. One day in the weight room, Jennings, not exactly a strongman on the iron, donned a wifebeater and went to work on the bench press. After completing a tough four-set session with 110 pounds, the slight 180-pounder stood tall in the middle of the room, banged his fist to his chest repeatedly and let out a primal scream: "With the heart! With the heart!"

Glancing at one another, his teammates smiled knowingly. "That meant a lot to us," said Rodrigo De La Fuente, Jennings' roommate in Folgaria. "Because he's the point guard, if he leads us by playing with heart, guys will follow that."

And this little ditty from a recent NY Times article:

“I have definitely improved as a player and a person,” Jennings said. “My family and I have had a really unique experience because of this decision, and I do believe it will advance my career in professional basketball.”

Two N.B.A. executives, who could not speak on the record because they would be fined by the N.B.A., said Jennings’s stock had not been hurt by the move.

One executive said many of the challenges Jennings faced — not being a star, riding the bench, dealing with older teammates — made him better prepared for his rookie year than if he had starred in college.

“You put a kid in a different culture and country, he has no choice but to grow up,” the executive said. “I like that. It shocks the system when you don’t get spoiled or coddled, and it’s humbling.”

Indeed.  The young man deserves nothing but respect for the way he has handled this entire situation.  Respect.

Getting around to the Wolves and Jennings, I wish I had a way to place him on our draft board.  I simply don't know enough about the EL to have an idea about where to put him.  That being said, I'm pretty sure the Wolves could do a lot worse.  The guy appears to be a very hard worker with solid point skills, leadership qualities, and game to boot.  Here's hoping the Wolves have a solid European scouting operation.  Here's hoping that Jennings inspires more and more high school students to get paid becoming professional ballers rather than get used lining the pockets of hypocritical NCAA leaders.

Moving along to the Wolves' other EL interest, check out this post from The Painted Area that prominently mentions Nikola Pekovic:

Pekovic, a rugged 6-11 F/C, was considered to be a mid-first round talent, but fell to Minnesota at #31 (the first pick of the second round) due to contract issues - he is not expected to make his way to the NBA until 2010-11. Considering the relative strengths of the 2008 and 2009 drafts, it's not a stretch to say that Pekovic could be a top 5 pick in this year's draft, though his upside is reduced now that he is 23 years old.

We've caught Pekovic a couple times on the Euroleague Game of the Week on NBA TV and have been impressed. It's a little jarring at first because he sort of resembles a guy like Peja Drobnjak physically, but he is really quite mobile and skilled, with good hands, touch and length, even if he is not the most athletic guy, per se.
...

All in all, Pekovic looks like a guy who's a pretty skilled and efficient scorer and rebounder, but not terribly strong on the defensive end. Potentially good news and bad news for Wolves fans, as you can never have enough skilled bigs, but those strengths and weaknesses sound an awful lot like those of Mssrs. Jefferson and Love - Minny could potentially be looking at a lot of 120-115 games in its 2010s.

It will be very interesting to see how Pekovic plays into the Wolves' future plans.  If they do plan on keeping him, I think you can pencil in a guard with this year's top pick....a guard like Brandon Jennings.

BTW: Pekovic is playing in the EL Final Four.  You can click here for the schedule.  You can buy a Final Four pass for just over 25 Euro.  I highly recommend the EL's pay-for-view product.  It's fantastic.  It's everything NBA League Pass should be but isn't.