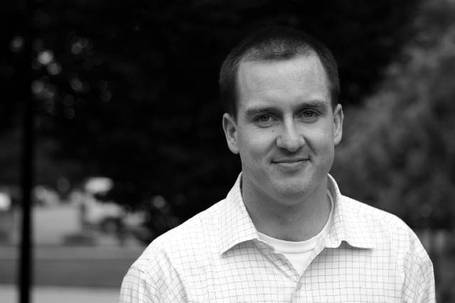 I think this is Sam Hinkie (via www.kumarfam.com)

When you first enter Hinkie’s office, it's the walls which immediately grab your attention. Opposite the doorway is a giant flatscreen TV but, believe it or not, that’s probably the least interesting decorative device in the room. Far more intriguing is the wall behind his desk, filled as it is with magnets featuring the names of every NBA player – organized by team – and their current salary. Meanwhile, the adjacent wall doubles as a giant dry-erase board currently littered with a bevy of concepts and strategies for playing against (and hopefully defeating) the Utah Jazz.

Despite his visit to the Target Center last Wednesday, Tom Penn is not under the microscope today. For a good take on Kevin Prtichard's right-hand man, check out the opinions Stop-n-Pop got from Benjamin Golliver of Blazers Edge.

Hinkie grew up Marlow, OK and before the age of 27 his resume included the following:

I say MBA "candidate" because Hinkie was hired in 2005 by the Rockets as Special Assistant to GM Leslie Alexander Carroll Dawson, before he graduated. Kinda makes you think about what you've accomplished with your life, doesn't it?

As Special Assistant, Hinkie was given a huge amount of input and responsibility for someone with his level of experiece: advising Alexander and his replacement Daryl Morey on the draft, free agency and trades, managing the team's salary cap and providing both scouting and statistical player evaluation. At the 2007 draft, Hinkie was part of Houston's war room with Morey, Coach Rick Adelman, Clyde Drexler and current Timberwolves Assistant Coach Dean Cooper. That September, he was promoted to Vice President of Basketball Operations.

While a good bit of his reputation consists of the statistical and financial evaluation, it's the more traditional, intuitive scouting that illuminates his evaluative balance.

While watching the likes of Oklahoma's Blake Griffin and Gonzaga's Jeremy Pargo, here's what Hinkie looked for: Does he talk to teammates? Does he talk to the crowd? Does he yell back at his coach? Does his coach baby him, and if so why? If he dunks off a lob, is it because the pass was perfect, or the play was a great setup, or did the defense go to sleep, or is the guy athletic enough to dunk without any of the above?

There don't seem to be many leaders in the NBA who are as equally comfortable with qualitative evaluation as they are quantitative. I'm currently pulling for Penn and Hinkie doesn't appear to be on the Wolves' radar at this point, but whomever decides to hire the man from Marlow will almost always have the smartest guy in the room on their side.