Curry and Redick, pt. i

Share All sharing options for: Curry and Redick, pt. i 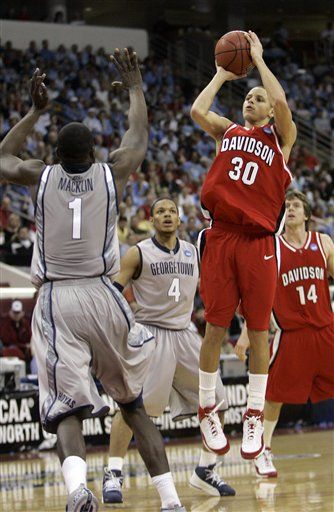 Let's start with the obvious: We here at Hoopus love us some Stephen Curry.  From the beginning of last season to our pre-season draft extravaganza to our updated draft board, we have long pegged Curry as a fantastic fit for the Wolves.  Here is what we wrote about the young fella at the beginning of the season:

I've made no bones about my belief that Curry is the best thing going in college ball this year.  A stunningly efficient jump-shooter who is able to maintain an extreme ORtg while holding the ball a ton, Curry will be given PG duties during his junior year at Davidson.  If he can maintain his Ortg/%Poss ratio while not turning the ball over and running an offense, Curry should be included in the conversation about who is the best lead guard in the draft.

He did that and then some.

Despite his sterling track record, there are a few seemingly legitimate knocks on Curry's game.  First, he's too small.  Second, he's a tweener.  Third, he'll get eaten alive on defense at the next level.  Fourth, he's J.J. Redick 2.0.  Depending on where the Wolves end up in the lotto, I'll address the first three points in a later post.  Right now I would like to take a moment to address the Redick Factor. Both players started out their careers as long range gunners who were heavily dependent on the three ball.  66% of Redick's shots as a freshman were from beyond the arc compared to 57% for Curry.  Since both players are solid outside shooters, this resulted in a fairly high pts/poss number.  What you will notice from the above graph is that while Redick was able to develop something of a dribble drive (and become more effective at getting into the lane in transition) game to increase his free throws per possession, Curry made large strides in his free throw rate and assist rate while maintaining a healthy points/poss mark.

In other words, Redick the Scorer was unable to make the transition to Redick the Facilitator while Curry most certainly was.  Let's take a deeper look at these numbers:

If you ever have to fall back on a single point in an argument between Redick and Curry, this should be your rock.  When asked to take upon the duties of point guard, Stephen Curry jacked up his assist rate from 19.3 to 40.2.  He did this while shouldering a mind-bending (and NCAA leading) 38% of his team's possessions. His turnover rate was 16.1, he carried a ppr of -0.11, and chalked up 0.24 assists/possession all the while being the sole focus of opposing defenses while leading a team filled with very, very, very modest D-I players.  The guy faced a box and 2 for Pete's sake.  In plain English, the guy upped his time on the ball while maintaining a relatively flat turnover rate and significantly increasing his facilitation numbers.

On the other hand, Mr. Redick played on one of the most prestigious programs in all of college ball, was surrounded by somewhere in the neighborhood of 5 McDonald's All Americans and he shot the damn ball and that's pretty much it.  Each game Davidson played this year, opposing defenses threw everything they had at a single guy.  Redick had guys like Sheldon Williams, Josh McRoberts, DeMarcus Nelson, and Shavlik Randolph.  One would think assists and solid facilitation numbers would be a tad easier to come by in such company than they were at lowly Davidson going up against gimmicky defenses constructed to stop a single player.

Redick was a gunner.  There is nothing wrong with that.  Let's take a quick look at how he made his shots compared to Curry: J.J. Redick never had a single season where his 3pa/fga number dipped below 50%.  He was an extreme outside shooter.  An absurdly extreme outside shooter, putting up over 60% in 3 of his 4 years.  While he did, as previously noted, develop something of a dribble drive game near the end of his college career, he is, was, and always will be a long range bomber.

Curry, on the other hand, has reduced his reliance on the three ball (from 57 to 49%) while getting to the line more often and maintaining a more than acceptable mid-range 2fg%.

J.J. Redick's highest % of poss was 29.2 in his senior year.  He used these possessions to jack up a gigantic number of three pointers, take a fair number of free throws and not much else.  Stephen Curry's highest % of poss was 38 in his junior year.  He used these possessions to score a lot of points, hand out a lot of assists, go to the line a fair amount, and not turn the ball over nearly as much as one would expect for someone with such a heavy load and a large target on his back.  Redick needed to shoot a large number of threes in order to be an effective player.  He really didn't do much else throughout his entire college career.  Outside of a modest dribble drive game, he stayed pretty much the same player he was as a senior as he was as a freshman.  The quality slightly improved, but the type was the same. On the other hand, Curry lowered the percentage of threes he took while increasing his load of team possessions, jacking up his assist numbers, getting to the line more often, and maintaining his excellent outside and mid-range shooting.

Curry looks like he's 15 years old.  At a quick glance he looks to be nothing more than your (slightly above) average college shooter: a guy who relies on the short college three and modest competition to be effective.  A J.J. Redick.  No, no, no, no, and more no.  He is a college guard who may have started out his career down the Redick path but he has since modified his game to incorporate more lead guard activities, less three point reliance, and an increase in free throws.

Stephen Curry is built for the modern NBA.  With modern hand checking rules, pro-style spacing, and a cache of hesitation moves, he is built to be a devastating pick-and-roll player.  While we don't have access to the type of data that would really help us make our point, Draft Express gave us enough to bridge the gap just a little:

In terms of guard play, his 41% shooting in transition ranks second to last, showing how hard he was pressing to score, but his 1.3 PPP on the pick and roll is excellent—which leaves a lot of room for optimism. He did use 2.6 possessions per game as a jump shooter running off of screens, so he does have a nice base of experience there, but it is notable how far apart Curry’s role in the NCAA was from the role he is likely to play in the NBA.

Part of the problem was that Davidson, unlike Duke, didn't exactly have anyone for him to effectively run the pick-and-roll with.

I would really, really, really like to know what Curry's numbers are from mid-range.  We have a pretty good idea but nothing that could be used definitively.  What we do know is that he is a fantastic shooting guard who can be on the ball for a large amount of time while not turning the ball over, facilitating ball movement among teammates, getting to the line at a decent clip, and converting on a large amount of pick-and-roll and spot up opportunities.

Depending on how the lotto plays out, we'll follow up this post with more on what makes Curry a completely different player than Redick.  Think of this post as a general argument about the differences between the two players.  Should the Wolves find themselves out of the top 2 in the draft (which we are going to assume are Blake Griffin and Ricky Rubio), we'll have more for you.

PS: I have attached an Excel spreadsheet with the numbers used to make the above charts.  You can find each player's full stat sheet here and here.  Curry and Redick xls.