The Good, the Bad, and Jennifer Aniston

Share All sharing options for: The Good, the Bad, and Jennifer Aniston 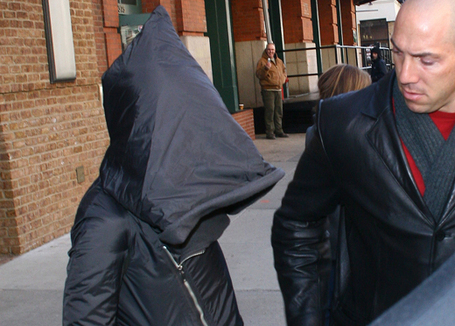 Well folks, if there's one things Wolves fans are good at and prepared for, it's seeing our favorite team move down in the lotto.  At least we have that going for us.  Last night's festivities made me think of three things.  Let's get the bad stuff out of the way first.

No matter where the Wolves would have ended up with the ping-pong balls, we would have led with this simple point: the team still lacks a head of Basketball Operations and they are almost a month away from the Draft.  They absolutely need a GM, Basketball VP, or whatever you want to call him.  The clock is ticking and regardless of your thoughts on who this person should be or whether or not the team is fumbling through the process, time is no longer on their side. They shouldn't panic into a rushed decision--these decisions aren't ones that you want to end up having to make over and over again with great frequency--but they also need to realize that there is an urgency to the proceedings that probably shouldn't have happened with a team that removed its Basketball Ops VP from his duties in December of last year.  If there is one point that is being overlooked, it is that this team knew what was coming and they failed to prepare accordingly.  That, by itself, is troubling.

In the spirit of yesterday's pre-draft positivity, let's move on to the good stuff--which there happens to be a lot of thanks to the lotto.  Let's count the ways:

As for the final portion of our little recap, I'd like to point to a tidbit from Andy G about Fred Hoiberg:

First (and most importantly) he emphasized that Taylor has offered GM candidates full control for personnel and coaching staff decisions. He wanted fans (and specifically, the blogosphere) to know that Taylor isn’t insisting anything related to he or McHale. How much truth there is to that, I haven’t any idea.

I received a few emails seconding as much.  Here's the thing: None of us really know what is going on with this GM search.  We know that the Wolves are in the market for someone to head up their Basketball Operations department.  We don't know what demands are being made in terms of responsibilities or salary.  Period.  Perhaps its time to do a Donald Rumsfeld run down of knowns, unknowns, known unknowns, and unknown unknowns, but the bottom line here is that there aren't a lot of knowns and it probably isn't fair to the team to speculate about this, that, or the other.  That's going to be our MO going forward.  We've said our piece about them looking for a bike in a car dealership and that's as much editorializing on the subject we will do until the next move is made.

That being said, even with a large amount of unknowns, known unknowns, and unknown unknowns, this isn't exactly a pretty picture.  Let's take a quick break from basketball to talk about Jennifer Aniston.  Sure, she's very pretty and most of us are generally inclined to be attracted to her, but for some unknown reason she just keeps getting ditched by potential suitor after potential suitor.  Is it fair to speculate that she has never gotten over Brad or that she is a weird control freak who keeps body hair samples of her past lovers?  Probably not.  What it is sort of fair to do is speculate that she might be the one with the relationship issues, and that instead of getting hung up about unfair speculation as to the specific things went wrong on this, that, or the other break up, her fans do have a good reason to wonder why, in general, no one on earth seems to want to maintain such an attractive partner with lots and lots of assets.

And so go the Wolves.  Attractive job? Check, it's one of 30 in the world and it's for a professional basketball organization.  Lots of assets? Check, numerous first round draft picks, cap space, and lots of room to show off one's creativity.  Despite all of this, Our Beloved Puppies are now on beau #4 with only a month before the biggest day of the offseason.

We here at Hoopus respect Hoiberg, and as a fellow kid from Ames I have a soft spot in my heart for the guy.  What we want him, and the team, to know is that throwing all of the speculation aside, this entire process still looks terrible and we have very little reason to believe that it will end well or be done competently.

Despite all of this, here is where I think most of the die-hards are at right now: 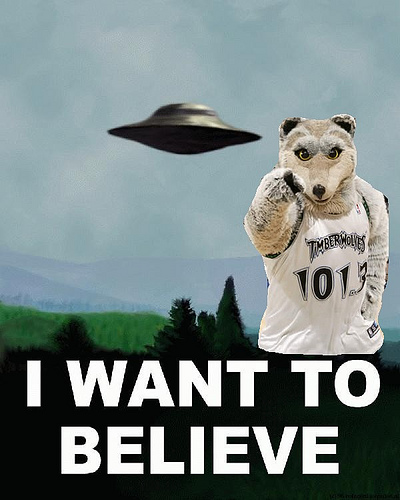 We all want to believe that our favorite team has the goods to be successful and happy.  We all want to believe that they know what they are doing.  Yet, the object of our affection keeps getting ditched in fantastic public fashion.  Instead of getting out ahead of the story and developing narratives of their own, the team we want to believe in remains quiet and passive on the public relations front.  It's frustrating and those of us who still care are left to put together the pieces on our own.

The team needs to get out ahead on this process and start developing its own themes and story lines.  This is not a complicated process.  If Papa Glen really does want Hoiberg to be talent evaluator and he is simply looking for someone to be a cap/contract/business guy, do they really think most of us who still want to believe would be upset with that ? Do they think acknowledging as much would tip their hand to potential candidates (who probably know all there is to know about their operation in the first place)?

We want to believe.  We want to be positive and not speculate.  What we also want is for the team to be more aware of the situation at hand and act accordingly.  That is all.

BTW: For those of you who can't get into playoff basketball without the Wolves, there is some world class entertainment going on over at CSPAN this week.  If there is anything I geek out about more than basketball, it is the legislative process.  Yesterday there was a day long markup in the House Energy Committee concerning the upcoming climate bill.  If you are at all familiar with guys like Joe Barton, Henry Waxman, or what it means when you turn on CSPAN at 11:00 PM and see a room full of petty arguing fools, then you absolutely need to turn into the action whenever something related to the climate bill pops on the tube.  It is high comedy, tragedy, and peep show all at once.

The highlight of last night's markup marathon was watching a conservative Republican grill a Florida Democrat on an amendment that would change a piece of US code in order to clarify a certain regulatory process for the states.  In between harrumphs about how the US was headed down the path towards a "socialist Spain" the poor gentleman managed to string together a single coherent thought about how his objection was based on the frivolity of this particular amendment.   In his mind, the amendment was a simple power grab and that the states did not require it for clear headed operation under existing US law.  After a few more jabs at the socialistic nature of the amendment (which, in reality, gives more power to the states to decide how they produce energy...which is another cosmic joke all unto itself), this schmuck asked the committee's legislative council if this amendment did what he thought it did; which, for the record, was why he was opposing it as a naked, socialistic power grab.  "No, no it does not.  It gives direction to the states."  The look on this guy's face was more priceless than Hoiberg's when he squeezed the teddy bear at last year's lotto.  He then proceeded to vote against the amendment even though he was told it did not do the one thing he objected to.

The really sad part is that there were numerous chuckles and jokes about the fact that this was simply another part of the game (the hearing was filled to the brim with inside baseball). That's your government ladies and gentlemen!!! It's not just that we are ruled by idiots; it's that we are ruled by idiot perverts who love nothing more than to stroke one another behind closed doors.   At another part of the hearing, Lee Terry (a Republican from Nebraska) appeared to make a joke about how he couldn't vote for a sensible Democratic amendment (the law clarification one) because he had already voted for a Democratic amendment about an hour before and he received too many evil eyes from his GOP brethren.  You can now add high school cliquishness to the stupidity and perversion.

Anywho, it's fascinating theater and it will make you laugh, cry, and throw things at the TV all at the same time.

UPDATE: The festivities in the House Energy Committee continue to be the best thing on television.  You can read about the markup on the committee's website by clicking here.  Yesterday's highlight was Tennessee congresswoman Marsha Blackburn pontificating on the non-existence of global warming because of the recent "strawberry winter" in her native central Tennessee.  Blackburn is from Brentwood, which, if you are familiar with the Nashville area, is a perfect fit for her--and vice versa for the district.  As you might imagine from someone with such an amazing scientific mind, her professional background is in retail marketing.  Regardless of your stance on this issue, you have to truly admire the gonads of someone who has such a strong stance on an subject she knows absolutely nothing about, nor is trained to deal with in any sort of serious manner.