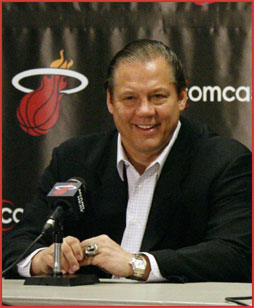 You may have noticed that I've thus far skipped David Kahn in the Executive Search process. He is, after all, the longest publicly-known candidate for the Timberwolves' GM position. But after the dust settled on last week's Dennis Lindsey kerfuffle, Randy Pfund's name popped up. And he seems interested in the job. I think it was Stop-n-Pop (apologies if the attribution is incorrect) that made a very important point: if Kahn was so high on the list and a new candidate surfaced, odds are he's not a good bet here in the home stretch, otherwise why not just hire him? Ergo, Pfund is today's man.

The toughest part about judging Pfund's tenure in Miami (Executive VP of Player Personnel from September 1995 to November 1996 when he was promoted to General Manager) is the persistent presence of Pat Riley in said front office. Riles was hired as President and Head Coach of the Heat in September 1995, two weeks before Pfund was brought on, and remains today as team President.

The most noticeable trend in their personnel strategy is favoring veterans over youngsters, no doubt the reason they continually made the playoffs. They traded their 1st round pick away 5 times in that span, with 4 of the moves targeting a veteran (Alonzo Mourning, Brent Barry, Brian Grant and Shaquille O'Neal).

A quick look at the 1st rounders they kept makes for an above-average resume:

The crown jewels, obviously, are Butler, Wade and Beasley. But these picks weren't exactly masterstrokes. Butler was known to be a tremendous talent, but fell due to "character issues" that he's obviously erased. Wade also fell after Detroit picked Darko Milicic and was far and away the best talent at #5 (yes, in hindsight, but also at the time), and the Beasley selection was essentially made for the Heat after Chicago took Derrick Rose.

They could've screwed up by taking gambles and there's really no criticism to levy against those 3 picks, but none exhibited creative or evaluative genius either.

The other picks are all forgettable, with Wright and Cook proving to be respectable NBA talents, but not starters on a contender. Simien was a Timberwolf for less than a week and only fell out of the league due to injury. And Smith and James never did much of anything.

As I try to make obvious to anyone who will listen, I'm not a fan of mortgaging the future for high-priced veterans in a win-now strategy. It worked for Boston for one year and it worked for the Heat in 05/06, but both teams look very run-down after their championship runs.

On the other hand, who am I to argue with success? They won rings, didn't they? Riley and Pfund were able to evaluate the proper talent to assemble a championship team and that definitely counts for something.

But that right there is the rub. I don't know how anyone can really parse out where in those 13 years Pfund deserves credit for the team's success. Maybe he saved Riley's bacon time after time, or maybe he was merely a vessel of Big Slick's desires.

The uncertainty as to what, precisely, Pfund has accomplished is why I'm not excited about the prospect of Glen Taylor hiring him. The Timberwolves are not a team that has an obvious core of championship-calibre talent to build around. Nor do we have a good number of high-value assets to parlay into veterans that could take us to the promised land. We've got some great potential cornerstones and a stable of middling assets, but nothing that looks like it could be part of or turned into a championship team in the next 2 years.

The guy I want is someone who will come in with a completely new strategy, drawing from the success of Poppovich's tactics. Going with a Pritchard, Ferry, Presti or Lindsey is a gamble too, of course. But this team has been mired in mediocrity for a long time and the only thing that saved us from utter irrelevance was one Kevin Garnett.

It's time for the new school to run the NBA (have you heard how many young starting point guards made the playoffs this year?) and we don't have that in Minnesota. Without it, I fear we're relegated to the middle of the pack for 4 straight years, instead of using each year to grow.