Simmons at the Draft

Share All sharing options for: Simmons at the Draft 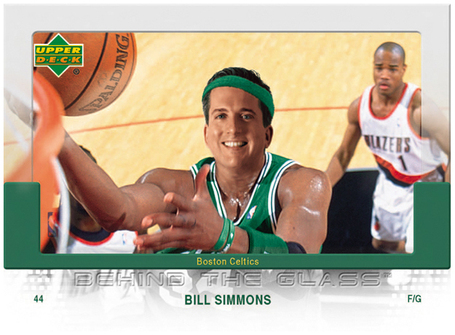 With all of the talk about Bill Simmons and the Wolves GM job, I thought it would be an interesting idea to take a trip back to his Draft Diary column series to see what he had to say about the Wolves and Wolves-related draft picks:

4:48: Minnesota takes Ovinton J'Anthony Mayo at No. 3 as Bilas tells us Mayo is "NBA-ready." You mean, from a fertility standpoint? Nope, he means "ready to step in and play right away." Got it. Maybe Mayo was the most talented prospect available (note: I argued Mayo's strengths in my back-and-forth with Marissa Cooper's Dad on Tuesday), but poor Mayo and his entourage look like they're consoling each other at a wake right now. Bad sign.

4:50: Normally, Mayo is disarmingly winsome and charming in interviews, to the point that part of me wants to legally adopt him. (I wish I had thought of this 10 years ago.) Not right now, not when he's coming to the realization he will be spending the next five years shoveling snow in Minnesota. Even Stephen A. can't get a rise out of him. Is it too early to list O.J. as the top free agent of the summer of 2013?

5:01 And now, the most exciting words in sports: "Chris Wallace is on the clock!" Anything's possible for Memphis here -- he could take Candace Parker and I wouldn't be surprised. I'm prepared for anything. Hold on, here's Stern ... and Memphis takes ... Kevin Love!

Did Chris Wallace just make a good draft pick? I think he did! The Grizzlies have good point guards and athletes who can run the floor, now they have a great rebounder and outlet passer ... I mean, they have some stuff going. Plus, Bilas loves his "pick and popability." So there's that.

5:11: You have to love the T-Wolves -- they waited a year too long to trade KG, then frantically shopped him for the past week, and while all this was happening, owner Glen Taylor headed to China for his honeymoon. Hey, Kevin, good luck dealing the most important player in franchise history, I'll be in Beijing with my fifth wife! Anyway, they just grabbed Corey Brewer at No. 7. Another well-done, logical pick. We're 5-for-7 right now.

8:10 -- And with the sixth pick, Minnesota somehow ends up with the best player in the draft: Brandon Roy. Funny how it always works out that way. With the new rules and his hesitation move alone, he's good for 16-18 points a game next season and 3-4 All-Star appearances down the road. Of course, Stephen A. thinks Minnesota just solved their point guard problems, even though Roy is a natural two-guard. Let's just move on.

As a quick side note, and as mentioned by the editor on that last link, not only was this the beginning of Foye/Roy, but it was the pick given to the Wolves because of the Mark Madsen tank game....a game in which the big dope took 7 three pointers and allowed Brian Cardinal to...well, Madsen committed a crime and he should never be forgiven for it.  The day when Madsen is off the Wolves can't come quickly enough.  Every second he occupies a Minny uniform is a slap in karma's face.  Do you think he teaches kids how to throw games at his basketball camps? Back to the action:

8:35 -- Tony Bennett reports that Minnesota and Portland are swapping draft picks -- Roy to Portland, Foye to Minnesota. That's it? That's the trade? None of the ESPN guys seem remotely fazed. I knew Kevin McHale couldn't just pick the best guy in the draft without somehow screwing it up. I would have bet my Ndudi Ebi rookie cards on it.

8:55 – Hoping to replace Latrell Sprewell's scoring, explosion and overall insanity, Minnesota takes Rashad McCants at No. 14. This leads to the funniest moment of the draft – McCants taking so long to hug his family and posse that Stern zoned out on the podium, followed by McCants having to tap him on the shoulder for the obligatory handshake. Fantastic. That could have earned this telecast "Save Until I Delete" TiVo status for at least three weeks.

8:59 – Poor Gerald Green – he has a "If I drop four more spots, I'm going to have to return that Hummer and the three Plasmas" look on his face right now.

By the way, here's my McCants question – everyone was writing that his stock was dropping as teams kept doing background checks on him. Well, what were they finding? Did he kill a litter of puppies? Did he appear in a snuff film? Or was it something as innocent as "His favorite movie is 'Scarface'"? As I'm mulling over the possibilities, McCants gives us the quote of the night: "My passion for winning is very misunderstood – it took us three years to win a championship, sometimes it takes guys 10 years."

9:13 – Indiana takes Granger, the only guy in this draft other than Paul who could have played in last week's Spurs-Pistons series – now he's going to one of the most talented teams in the league? Yikes. My disappointed father (a Granger fan) immediately brings up the '85 Draft when the Pistons took Joe Dumars one spot ahead of the Celtics.

2004 (otherwise known as the draft where BIll went nuts for Okafor over Howard):

8:56 -- With the Celtics on the clock, ESPN runs footage of the Johnson-Brown-Forte picks from 2001 just to torture me. Thanks, guys. You forgot to show Lenny Bias trying on the green Celtics hat. I feel sick.

8:57 -- Boston takes ... high schooler Al Jefferson. Good pick. Other than Kirk Snyder, he was the best guy on the board, and we didn't need Snyder. Dad and I exchange nods of approval. "I'm surprised he lasted this long" says Bilas, adding that he's "relentless" and has "upside." I think we're about two years away from somebody creating an NBA Draft Cliché Karaoke Machine.

You may recall that the Wolves forfeited their pick that season.

6:47 -- Last two picks: Carlos Dellino to Detroit, Ndidu Ebi to Minnesota. I have absolutely no opinion whatsoever, other than Ebi's first name is pronounced "Doody." That's right, "Doody." Where are Spaulding Smails and Carl Spackler when you need them?

Just for kicks and giggles, let's see what Bill has to finish out the round:

6:50 -- Picking for the Celts, Memphis takes ... high school center Kendrick Perkins. 6-foot-10, 285. Nice. There's some Eddy Curry potential there. Then again, there's some Thomas Hamilton potential. "He has a tremendous upside," Danny Ainge tells Tirico. That's good to know. I was worried he just had upside.

6:57 -- Some Brazilian guy just went to the Spurs ... according to Katz, the Brazilian guy's stock rose because there was a "tape circulating about him" that everyone was trying to get their hands on. He doesn't elaborate. Was this like the Tommy Lee-Pamela Anderson tape? Was he steering a speedboat with his genitals or something? I need answers.

For those of you playing along at home, that Brazilian guy was Leandro Barbosa.

Nothing on the Wolves.  Another forfeited pick.

Nothing on the Wolves.  Another forfeited pick.

Nothing on the Wolves. Another...you know what, nobody gets to complain that Simmons would do a poor job at this point.  Is quality control even relevant with this franchise?  Interestingly enough, 2000 was the last year the NBA held outside of NYC.  It was at the Target Center.  It was probably the worst draft in the last 20 years.

In all seriousness, I get that this isn't going to happen but I also think that the Wolves have been afforded a fantastic opportunity where a national columnist has taken interest in their product.  Don't slam the guy or diminish what he brings to the table.  Remember, your fans have had to sit though about 10 years of nonsense when it comes to what happens in the front office.  Don't get all high-and-mighty about how Simmons doesn't understand the "little things" that make for a successful NBA front office.  News flash: you guys don't understand the little things that make for a successful NBA front office.  From the 99 Draft to Wally's contract to T-Hud to Hassell to the Joe Smith nonsense to Shaddy to Foye/Roy to the Wrong Gator you guys aren't exactly on high ground when it comes to lecturing people on the finer points of NBA GM-dom. Let's also ease up on the "he's just a comic" angle.  Y'all have been high comedy wizards for the past decade.

You don't have to hire the guy as your GM but would it hurt to bring him in for an interview?  Would it hurt to bring him aboard in some capacity to give the franchise a national following?  Let him have the Plimpton-esque NBA book that he seems to be going for.  Don't dismiss this as a joke.  It's no more of a joke than what we fans have had to endure for far too long.  Any team that selects Doody Ebi because its GM liked how aggressive he was against LeBron James during the McDonald's All American game forfeits more than draft picks; as type-casted comedians they lose any claim to seriousness.