Share All sharing options for: Jackson'd!!! (+ Community Draft Board) 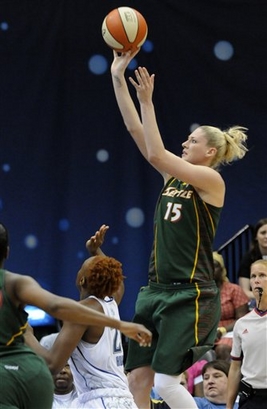 First of all, a hearty thank you goes out to the Seattle Storm for not pulling a marketing gimmick and changing their team's unis to something along the lines of Lauren Jackson's Aussie Olympic gear.  I can live with ads on the jerseys but dressing up women ballers in form-fitting sex suits would be just silly.  Loose unis for everyone!!!

Getting around to the game, the Lynx ran into Ms. Jackson and Sue Bird last night at the Target Center.  Before the game I had never heard of Swin Cash but now both I and Seimone Augustus know all about her, as the Minny Olympian was pestered into a 6-15 shooting night and she had to work hard for every one of her points.
It will be interesting to see how the Lynx bounce back from this loss.  The Storm made a concerted effort to keep the Lynx in a 1/2 court setting and it really affected how the hometown five were able to score.  Gone were the layups and quick twos before the defense could really set up.  Gone were the open threes brought about by a transitioning defense.  Instead, the Lynx were slug-fested to the ground.  For fans of wide-open ball, this is the biggest problem that comes with the philosophy: How do you respond when you are hit in the mouth and slowed down?  Win or lose, it will be interesting to see how the Lynx respond to the challenge.

It should also be noted that Lynx coach Jen Gillom is being inducted into the Women's Basketball Hall of Fame today.  Hall of Famers, Olympians, exciting ball, and a roster filled with players from powerhouses like Stanford, UConn, Tennessee, and LSU.  This is what you get at a Lynx game.  The WNBA even lets you watch them for free on line.  Imagine that, a Broadband League Pass that actually works!

Wrapping this little ditty up, here is where we stand with the Community Draft Board:

Who should be the #11 player on the Wolves' draft board?

One final thing: I took part in Ridiculous Upside's Mock Draft.  You can read my selection for the Wolves here.

Who should be the #11 pick on the Wolves' draft board?