The Lynx too? Plus, we continue the Community Draft Board

Share All sharing options for: The Lynx too? Plus, we continue the Community Draft Board 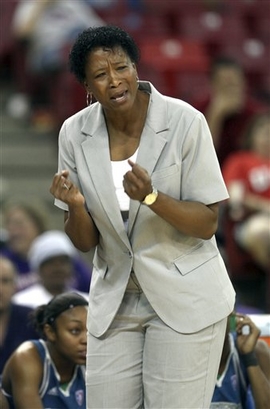 Good lord, as if watching one team have its best player go down with a devastating season-ending knee injury wasn't enough, yesterday delivered news that the Lynx's Seimone Augustus (Olympian Seimone Augustus) has a torn ACL in her left knee and will be out for the year. I cannot explain to you just how much this is going to impact the Lynx's season. Keep in mind that the team is already dealing with a situation where their coach bolted on them a few days before the beginning of the season to take a job in the NBA. This situation is every bit as turbulent, if not more, than what happened to the Wolves with Randy Wittman and Al Jefferson. Relatively speaking, Augustus is the better player and the Lynx have better all-around talent than the Wolves. In other words, this loss, combined with the already-tough coaching change, is going to make it hard for the Lynx to win a lot of games...which is extremely unfortunate because this squad has a phenomenal young core (Wiggins, Augustus, Montgomery, Anosike) that was poised to take a big step this year with a healthy leader on the court and a new leader on the bench.

Exhibit A is last night's 28-point loss to the Seattle Storm. The Lynx, a team that scored a boat load of points over its first few games, never scored more than 20 points in a quarter while shooting less than 30% from the floor. Ball movement was stagnant, the offense was stifled, and transition opportunities were almost non-existent. Moving back to the bigger picture, let's take a quick look back to former Hoopus contributor Peter W's 2008 Lynx preview:

Why they won't make the playoffs comes down to three factors: coaching, defense, and point guard play. Zierden is not head coaching material, period. In the games I saw last year, he had no strategy on how to break presses or half court traps, and his offense centered around Augustus using her athleticism to try and make something happen. The fact she was second in the league in scoring and attempted 241 more shots than any other Lynx player last year speaks volumes for the way Zierden used her.

This issue was being addressed this season but it a) wasn't completely fixed, and b) is still hard to overstate just how important Augustus is/was/will be to the offense of this ball club. Until Renee Montgomery can start displaying her college form at the point, this team will be much too dependent on one player for ball movement, offense, transition play...you name it. If there is any silver lining to this situation (and there really isn't; their best player went down with a knee injury), it is that Montgomery should be thrown into the fire and forced into a bit higher learning curve than she was before. Hopefully, she will respond well. Here's hoping for a speedy and full recovery for Augustus. Here's hoping that the Lynx can find a way to adjust to their new reality and get back to playing some entertaining and competitive games. It will be a tall order on a team that is trying to rid itself of the 1-player dominant style it exhibited last season.

Moving on to the Community Draft Board, here is where we currently stand:

Just to give you an idea of how this stacks up to our very own Hoopus Score Draft Board, here's a link to the list. We'll put up our final draft board (with 1 or 2 changes from that link) on Monday or Tuesday.