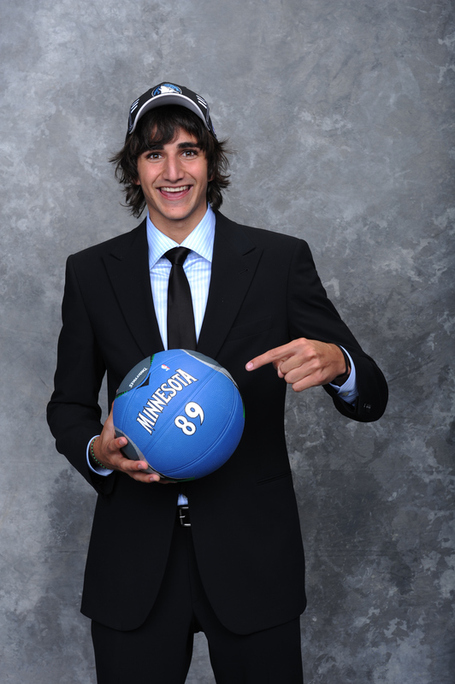 Well folks, I'm going to turn in for the night but before I go I just wanted to put up a few quick thoughts about the draft.

First of all, let's take a quick run-down of who is on the team:

Obviously, some of these guys aren't going to play even if they're with the team.  Madsen, Norel, Pecherov, and Bobby Brown are all 12th-15th men at best.  If the status quo remains (and it won't), the Wolves could probably get by with buying out someone like Brown or Madsen.

Getting around to the elephant in the room, the Wolves selected 4 guards, 3 of them points.  The bottom line here, for me, is that a 24-win team with a starting back court of Bobby Brown and Sebastian Telfair (yes, that's what they were looking at before the draft) took the 2 top players on their draft board (who were guards) and they didn't have to move anything to do so.  That's it.  If they had traded 5 and 6 for Rubio we'd all be sitting here excited about the young Spaniard.  They got the kid at 5 and their BPA at 6.  Even if the Wolves were a loaded team (and they're not), how can you possibly argue against a draft where a team with two top 10 picks gets their top 2 guys?  You'd take that every year if you could.

Since most of us are Minnesotans, we are imbued with a deep lack of self worth and we must consciously resist the knee-jerk reaction of looking too much into Rubio's body language after the pick, his dad's comments about staying in Europe, or tall tales of the big city Knicks doing everything they can to get what the Wolves have in hand: the most exciting player in the draft.  Right now, enjoy the moment.  Instead of worrying about it, think of all of those times you dialed up Rubio on YouTube hoping he'd land at the Target Center.  Think of waking up early to watch the Spain/USA Gold Medal game.  If Rubio is going to play in Minny, the only way he was going to do so was to land in the Wolves' laps with the 5th pick.  It happened.  Enjoy it.  Let's worry about the buyout, trades, and staying in Europe later.  The main thing I'm worried about right now is when I can get my hands on a pair of Rubio shirts for my girls.

Getting around to what we will see on the court, who here thinks that Rubio can run the point better than Randy Foye?  OK, good.  Now, who here thinks that Jonny Flynn is an upgrade over Sebastian Telfair or Bobby Brown?  OK, good.  Keep in mind that David Kahn just traded Mike Miller and Randy Foye--two players who would have been gone after the season--for Ricky Rubio.  Keep in mind that had the Thunder went with Rubio we would be talking about Harden and Flynn.  Could the Wolves have made out better with Curry?  I think so but it's hardly a lopsided set of circumstances.

Moving down the draft, the Wolves picked up a serviceable shooting guard at 28 (Ellington) and they will hopefully hang on to Nick Calathes with their top 2nd round pick.  Again, going back to the bottom line: a team that was looking at a starting back court of Bobby Brown and Sebastian Telfair at the start of the day walked away with 4 solid guards.  They did so in a draft nearly completely void of shooting guards.  Could they have reached for DeRozan at 6? Sure, but let's not forget that this draft was beyond thin at that position.  It was thin at center.  What it did have is a bunch of decent power forwards and a bunch of decent point guards.  Here's what I think we're looking at in terms of a rotation:

I 100% believe that is not what we'll see, but even if it is, it's not a bad thing.  This team still has a huge amount of assets to move around in the off-season and before the trading deadline.  They have Calathes and Pekovic with European contracts; they have millions of dollars in expiring contracts; they have 2 of the highest rated point guards in the draft; they have serviceable players like Gomes and Smith that can be moved.  If there is one thing I would like people to take away from this draft it is this: You cannot grade this draft until next season's draft.  The Wolves are a 24-win team and they can't upgrade everything at once.  What they can do--and what they did--is gather as many BPAs as possible in the draft, amass future assets (future 1st for Lawson), and maintain roster flexibility.  Remove any names from the picks and ask yourself this: If I were to tell you that the Wolves picked up 2 stashed Euro contracts, the 2 best players on their draft board, and a possible 2010 1st rounder, would you have signed on to that outcome?

OK, that about does it for now.  There are some legitimate concerns about this draft and we will deal with them in the next week or so.  Right now, enjoy it.  The guy you watched in the Olympics and on YouTube has been drafted by your favorite club.

UPDATE: Calathes was traded as I wrote this.